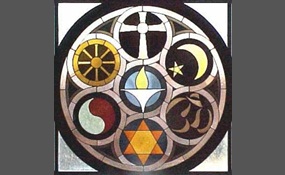 Which do you indentify with?

If you would like another religious or belief group put on the list please indicate it in the comments.

Christianityis a monotheistic religion centered on the life and teachings ofJesus of Nazareth as presented in the Holy Bible. Christiansbelieve Jesus to be the Son of God and the Messiah prophesied in theOld Testament. With an estimated 2.1 billion ... adherents in 2001,Christianity is the world's largest religion. It is the predominantreligion in Europe, the Americas, Sub-Saharan Africa, the PhilippineIslands, Australia, and New Zealand. Itis also growing rapidly in Asia, particularly in China and SouthKorea. Christianity began in the 1st century AD as a Jewishsect, and shares many religious texts with Judaism, specifically theHebrew Bible, known to Christians as the Old Testament. Like Judaism and Islam, Christianity is classified asan Abrahamic religion   more
16 votes
1 comment
Christianity - Voter Comments

Atheism is, in a broad sense, the rejection of belief in the existence of deities. In a narrower sense, atheism is specifically the position that there are no deities. Most inclusively, atheism is the absence of belief that any deities exist. Atheis... m is contrasted with theism, which, in its most general form, is the belief that at least one deity exists.The term "atheism" originated from the Greek ἄθεος, meaning "without god", used as a pejorative term applied to those thought to reject the gods worshiped by the larger society. With the spread of freethought, skeptical inquiry, and subsequent increase in criticism of religion, application of the term narrowed in scope. The first individuals to identify themselves using the word "atheist" lived in the 18th century. Some ancient and modern religions are referred to as atheistic, as they either have no concepts of deities or deny a creator deity, yet still revere other god-like entities.Arguments for atheism range from the philosophical to social and historical approaches   more
12 votes
2 comments
Atheism - Voter Comments

Islam is a monotheistic and Abrahamic religion articulated by the Qur'an, a book considered by its adherents to be the verbatim word of God, and for some sects, also by the teachings and normative example of Muhammad, considered by them to be the la... st prophet of God. An adherent of Islam is called a Muslim.Muslims believe that God is one and incomparable and that the purpose of existence is to worship God. Muslims also believe that Islam is the complete and universal version of a primordial faith that was revealed many times before through prophets including Adam, Noah, Abraham, Moses, and Jesus. They maintain that the previous messages and revelations have been partially misinterpreted or altered over time, but consider the Arabic Qur'an to be both the unaltered and the final revelation of God. Religious concepts and practices include the five pillars of Islam, which are basic concepts and obligatory acts of worship, and following Islamic law, which touches on virtually every aspect of life and society, providing guidance on multifarious topics from banking and welfare, to family life and the environment   more
7 votes
2 comments
Islam - Voter Comments

AllahoAkbar says2015-06-25T20:52:22.3633499-05:00
Report Post
Islam is the true uncorrupted faith prophets from Adam to Muhammad preached to the people to save them from themselves in this life and from the hellfire in the hereafter.
Vote & Comment
4

Judaism is the religion, philosophy, and way of life of the Jewish people. Judaism is a monotheistic religion, with the Torah as its foundational text, and supplemental oral tradition represented by later texts such as the Midrash and the Talmud. Ju... daism is considered by religious Jews to be the expression of the covenantal relationship that God established with the Children of Israel.Judaism includes a wide corpus of texts, practices, theological positions, and forms of organization. Within Judaism there are a variety of movements, most of which emerged from Rabbinic Judaism, which holds that God revealed his laws and commandments to Moses on Mount Sinai in the form of both the Written and Oral Torah. Historically, this assertion was challenged by various groups such as the Sadducees and Hellenistic Judaism during the Second Temple period; the Karaites and Sabbateans during the early and later medieval period; and among segments of the modern reform movements. Liberal movements in modern times such as Humanistic Judaism may be nontheistic. Today, the largest Jewish religious movements are Orthodox Judaism, Conservative Judaism and Reform Judaism   more
4 votes
0 comments
Judaism - Voter Comments
No Comments
Vote & Comment
5

Agnosticism is the view that the truth values of certain claims – especially metaphysical and religious claims such as whether or not God, the divine or the supernatural exist – are unknown and perhaps unknowable. In the popular sense of the term, a... n "agnostic", according to the philosopher William L. Rowe, is someone who neither believes nor disbelieves in the existence of God, while a theist believes that God does exist and an atheist believes that God does not exist. Agnosticism is a doctrine or set of tenets rather than a religion as such.Thomas Henry Huxley, an English biologist, coined the word "agnostic" in 1869. Earlier thinkers, however, had written works that promoted agnostic points of view, such as Sanjaya Belatthaputta, a 5th-century BCE Indian philosopher who expressed agnosticism about any afterlife; and Protagoras, a 5th-century BCE Greek philosopher who expressed agnosticism about "the gods". The Nasadiya Sukta in the Rigveda is agnostic about the origin of the universe.Since Huxley coined the term, many other thinkers have written extensively about agnosticism   more
3 votes
1 comment
Agnosticism - Voter Comments

Cannibalism is the act or practice of humans eating the flesh or internal organs of other human beings. It is also called anthropophagy. A person who practices cannibalism is called a cannibal. The expression "cannibalism" has been extended into zoo... logy to mean one individual of a species consuming all or part of another individual of the same species as food, including sexual cannibalism.The Island Carib people of the Lesser Antilles, from whom the word cannibalism derives, acquired a long-standing reputation as cannibals following the recording of their legends in the 17th century. Some controversy exists over the accuracy of these legends and the prevalence of actual cannibalism in the culture. Cannibalism was widespread in the past among humans in many parts of the world, continuing into the 19th century in some isolated South Pacific cultures, and to the present day in parts of tropical Africa. Cannibalism was practiced in New Guinea and in parts of the Soloman islands, and flesh markets existed in some parts of Melenesia. Fiji was once known as the 'Cannibal Isles'   more
2 votes
2 comments
Other - Voter Comments

The Flying Spaghetti Monster is the deity of the Church of the Flying Spaghetti Monster or Pastafarianism, a movement that promotes a light-hearted view of religion and opposes the teaching of intelligent design and creationism in public schools. Al... though adherents describe Pastafarianism as a genuine religion, it is generally seen by the media as a parody religion. The "Flying Spaghetti Monster" was first described in a satirical open letter written by Bobby Henderson in 2005 to protest the Kansas State Board of Education decision to permit teaching intelligent design as an alternative to evolution in public school science classes. In that letter, Henderson satirized creationism by professing his belief that whenever a scientist carbon-dates an object, a supernatural creator that closely resembles spaghetti and meatballs is there "changing the results with His Noodly Appendage". Henderson argued that his beliefs were just as valid as intelligent design, and called for equal time in science classrooms alongside intelligent design and evolution   more
2 votes
2 comments
Pastafarianism - Voter Comments

Buddhism is a nontheistic religion that encompasses a variety of traditions, beliefs and practices largely based on teachings attributed to Siddhartha Gautama, who is commonly known as the Buddha, meaning "the awakened one". According to Buddhist tr... adition, the Buddha lived and taught in the eastern part of the Indian subcontinent sometime between the 6th and 4th centuries BCE. He is recognized by Buddhists as an awakened or enlightened teacher who shared his insights to help sentient beings end their suffering through the elimination of ignorance and craving by way of understanding and the seeing of dependent origination and the Four Noble Truths, with the ultimate goal of attainment of the sublime state of Nirvana, by practicing the Noble Eightfold Path.Two major extant branches of Buddhism are generally recognized: Theravada and Mahayana. Theravada has a widespread following in Sri Lanka and Southeast Asia. Mahayana is found throughout East Asia and includes the traditions of Pure Land, Zen, Nichiren Buddhism, Tibetan Buddhism, Shingon, and Tiantai   more
1 vote
1 comment
Buddhism - Voter Comments

Confucianism, literally "The School of the Scholars," is a Chinese ethical and philosophical system originally developed from the teachings of the early Chinese sage Confucius. Confucianism is a complex system of moral, social, political, philosophi... cal, and religious thought which has had tremendous influence on the history of Chinese civilization up to the 21st century. Some people in the West have considered it to have been the "state religion" of Imperial China because of the Chinese government's promotion of Confucianist values   more
0 votes
0 comments
Confucianism - Voter Comments
No Comments
Vote & Comment
10

Bragxnxall says2015-06-22T22:44:48.9517784-05:00
Report Post
Anything besides an organized religion, besides Buddhism, which I see as less of a religion and more of a spiritual life style. Otherwise I am agnostic atheist.