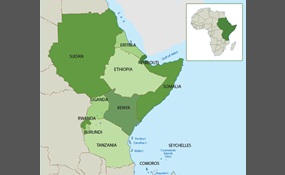 Kenya, officially the Republic of Kenya, is a country in the African Great Lakes region of East Africa. Its capital and largest city is Nairobi. Kenya lies on the equator with the Indian Ocean to the south-east, Tanzania to the south, Uganda to the ... west, South Sudan to the north-west, Ethiopia to the north and Somalia to the north-east. Kenya covers 581,309 km² and had a population of approximately 44 million people in July 2012.Kenya has a warm, humid climate along its Indian Ocean coastline, with wildlife-rich savannah grasslands inland towards the capital. Nairobi has a cool climate which becomes colder closer to Mount Kenya, which has three permanently snow-capped peaks. Further inland, there is a warm and humid climate around Lake Victoria, and temperate forested and hilly areas in the western region. The northeastern regions along the border with Somalia and Ethiopia are arid and semi-arid areas with near-desert landscapes. Lake Victoria, the world's second largest fresh-water lake and the largest tropical lake, is situated to the southwest and is shared with Uganda and Tanzania   more
1 vote
0 comments
Kenya - Voter Comments
No Comments
Vote & Comment
2

Somalia, officially the Federal Republic of Somalia, is a country located in the Horn of Africa. It is bordered by Ethiopia to the west, Djibouti to the northwest, the Gulf of Aden to the north, the Indian Ocean to the east, and Kenya to the southwe... st. Somalia has the longest coastline on the continent's mainland, and its terrain consists mainly of plateaus, plains and highlands. Climatically, hot conditions prevail year-round, with periodic monsoon winds and irregular rainfall.Somalia has a population of around 10 million. Around 85% of residents are ethnic Somalis, who have historically inhabited the northern part of the country. Ethnic minorities make up the remainder and are largely concentrated in the southern regions. The official languages of Somalia are Somali and Arabic, both of which belong to the Afro-Asiatic family. Most people in the country are Muslim, with the majority being Sunni.In antiquity, Somalia was an important commercial centre, and is among the most probable locations of the fabled ancient Land of Punt   more
1 vote
1 comment
Somalia - Voter Comments

Ethopia is a genus of snout moths. It was described by Walker in 1865.
1 vote
1 comment
Ethiopia - Voter Comments

Sudan, officially the Republic of the Sudan, is an Arab republic in the Nile Valley of North Africa, bordered by Egypt to the north, the Red Sea, Eritrea and Ethiopia to the east, South Sudan to the south, the Central African Republic to the southwe... st, Chad to the west and Libya to the northwest. It is the third largest country in Africa. The Nile River divides the country into eastern and western halves. Its predominant religion is Islam.Sudan was home to numerous ancient civilizations, such as the Kingdom of Kush, Kerma, Nobatia, Alodia, Makuria, Meroë and others, most of which flourished along the Nile River. During the predynastic period Nubia and Nagadan Upper Egypt were identical, simultaneously evolved systems of pharaonic kingship by 3300 BC. By virtue of its proximity to Egypt, the Sudan participated in the wider history of the Near East inasmuch as it was Christianized by the 6th century, and Islamized in the 7th. As a result of Christianization, the Old Nubian language stands as the oldest recorded Nilo-Saharan language   more
0 votes
0 comments
Sudan - Voter Comments
No Comments
Vote & Comment
5

Uganda, officially the Republic of Uganda, is a landlocked country in East Africa. It is bordered to the east by Kenya, to the north by South Sudan, to the west by the Democratic Republic of the Congo, to the southwest by Rwanda, and to the south by...  Tanzania. Uganda is the world's second most populous landlocked country after Ethiopia. The southern part of the country includes a substantial portion of Lake Victoria, shared with Kenya and Tanzania, situating the country in the African Great Lakes region. Uganda also lies within the Nile basin, and has a varied but generally equatorial climate.Uganda takes its name from the Buganda kingdom, which encompasses a large portion of the south of the country including the capital Kampala. The people of Uganda were hunter-gatherers until 1,700 to 2,300 years ago, when Bantu-speaking populations migrated to the southern parts of the country.Beginning in the late 1800s, the area was ruled as a colony by the British, who established administrative law across the territory. Uganda gained independence from Britain on 9 October 1962   more
0 votes
0 comments
Uganda - Voter Comments
No Comments
Vote & Comment
6

Rwanda, officially the Republic of Rwanda, is a sovereign state in central and east Africa. Located a few degrees south of the Equator, Rwanda is bordered by Uganda, Tanzania, Burundi and the Democratic Republic of the Congo. Rwanda is in the Africa... n Great Lakes region and is highly elevated; its geography dominated by mountains in the west and savanna to the east, with numerous lakes throughout the country. The climate of the country is temperate to subtropical, with two rainy seasons and two dry seasons each year.The population is young and predominantly rural, with a density among the highest in Africa. Rwandans are composed of three ethnic groups: the Hutu, Tutsi and Twa. The Twa are a forest-dwelling pygmy people descended from Rwanda's earliest inhabitants. Scholars disagree on the origins of and differences between the Hutu and Tutsi; some believe differences are derived from former social castes, while others view them as being ethnicities or tribes. Christianity is the largest religion in the country; the principal language is Kinyarwanda, spoken by most Rwandans, with French and English serving as official languages. Rwanda has a presidential system of government   more
0 votes
0 comments
Rwanda - Voter Comments
No Comments
Vote & Comment
7

Burundi or, officially the Republic of Burundi, is a landlocked country in the African Great Lakes region of Southeast Africa, bordered by Rwanda to the north, Tanzania to the east and south, and the Democratic Republic of the Congo to the west. It ... is also sometimes considered part of Central Africa. Burundi's capital is Bujumbura. Although the country is landlocked, much of the southwestern border is adjacent to Lake Tanganyika.The Twa, Hutu and Tutsi peoples have lived in Burundi for at least five hundred years. For more than 200 years, Burundi had an indigenous kingdom. At the beginning of the twentieth century, Germany colonized the region. After the First World War and its defeat, it ceded the territory to Belgium. The latter ruled Burundi and Rwanda as a European colony known as Ruanda-Urundi. Their intervention exacerbated social differences between the Tutsi and Hutu, which contributed to political unrest in the region. There was civil war in Burundi as it fought for independence in the middle of the twentieth century. Presently, Burundi is governed as a presidential representative democratic republic   more
0 votes
0 comments
Burundi - Voter Comments
No Comments
Vote & Comment
8

Djibouti, officially the Republic of Djibouti, is a country located in the Horn of Africa. It is bordered by Eritrea in the north, Ethiopia in the west and south, and Somalia in the southeast. The remainder of the border is formed by the Red Sea and...  the Gulf of Aden at the east. Djibouti occupies a total area of just 23,200 km².In antiquity, the territory was part of the Land of Punt. Nearby Zeila was the seat of the medieval Adal and Ifat Sultanates. In the late 19th century, the colony of French Somaliland was established following treaties signed by the ruling Somali and Afar sultans with the French and its railroad to Dire Dawa allowed it to quickly supersede Zeila as the port for southern Ethiopia and the Ogaden. It was subsequently renamed to the French Territory of the Afars and the Issas in 1967. A decade later, the Djiboutian people voted for independence. This officially marked the establishment of the Republic of Djibouti, named after its capital city. Djibouti joined the United Nations the same year, on September 20, 1977   more
0 votes
0 comments
Djibouti - Voter Comments
No Comments
Vote & Comment
No comments yet.
Leave a comment...
(Maximum 900 words)
Privacy Policy | Terms of Use
Sitemap | View Desktop Version
©2020 Debate.org. All rights reserved.