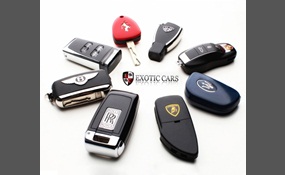 SSC North America is an American automobile manufacturer founded in 1998 by owner Jerod Shelby. The company is based in West Richland, near the Tri-Cities, Washington and specializes in the production of supercars.They built the SSC Aero, equipped w... ith a twin turbocharged pushrod engined V8s. Its turbocharged 6.35 litres V8 produces 1,287 bhp, which made it the most powerful production car in the world, until the arrival of Koenigsegg One:1 in 2014. On September 13, 2007, the "Ultimate Aero" took the title of fastest production car from the Bugatti Veyron. The Ultimate Aero has a top speed of 412 km/h.On June 26, 2010 the title was again lost to the upgraded Bugatti Veyron Super Sport that now holds the world speed record for production cars - 267.856 mph.Their new car is the SSC Tuatara   more
1 vote
0 comments
Shelby SuperCars - Voter Comments
No Comments
Vote & Comment
9

gabep says2015-05-15T21:53:22.0562901-05:00
Report Post
Not really: "Exotic by definition means out of the ordinary. The exotic cars are usually produced in limited numbers since very less number of people actually buy them". The cars you named are pretty common. "The exotic cars have looks that are out-of-this-world and are much sleeker and sophisticated if you compare them with normal cars". Those manufacturers make pretty ordinary-looking cars. "Since exotic cars are not meant for the common lot, they are quite expensive. Any vehicle that is priced above $100 K can be termed as an exotic vehicle". I can only think of a few cars from the brands that you stated that would match this criteria - i8, M6, AMG GT, LFA
Privacy Policy | Terms of Use
Sitemap | View Desktop Version
©2020 Debate.org. All rights reserved.