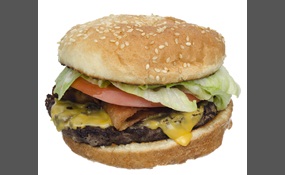 Which fast food hamburger chain do you like more?

Five Guys is a fast casual restaurant chain focused on hamburgers, hot dogs, and French fries, with its headquarters in the Lorton community in unincorporated Fairfax County, Virginia. The first Five Guys restaurant opened in 1986 in Arlington Count... y, Virginia, and between 1986 and 2001, the chain expanded to five locations scattered through the Washington, D.C. Metro area.In early 2003, the chain began franchising, opening the doors to rapid expansion. In a year and a half, permits had been sold for over 300 franchised locations. As of 2012, Five Guys has over 1,000 locations open throughout the United States and Canada and over 1500 locations under development. The company is the fastest-growing fast food chain in the United States, with a 32.8% sales increase from 2010 to 2011   more
7 votes
0 comments
Five Guys - Voter Comments
No Comments
Vote & Comment
2

Burger King, often abbreviated as BK, is a global chain of hamburger fast food restaurants headquartered in unincorporated Miami-Dade County, Florida, United States. The company began in 1953 as Insta-Burger King, a Jacksonville, Florida-based resta... urant chain. After Insta-Burger King ran into financial difficulties in 1954, its two Miami-based franchisees, David Edgerton and James McLamore, purchased the company and renamed it Burger King. Over the next half century, the company would change hands four times, with its third set of owners, a partnership of TPG Capital, Bain Capital, and Goldman Sachs Capital Partners, taking it public in 2002. In late 2010, 3G Capital of Brazil acquired a majority stake in BK in a deal valued at US$3.26 billion. The new owners promptly initiated a restructuring of the company to reverse its fortunes. 3G, along with partner Berkshire Hathaway, eventually merged the company with Canadian-based donut chain Tim Hortons   more
7 votes
2 comments
Burger King - Voter Comments

The McDonald's Corporation is the world's largest chain of hamburger fast food restaurants, serving around 68 million customers daily in 119 countries across 35,000 outlets. Headquartered in the United States, the company began in 1940 as a barbecue...  restaurant operated by Richard and Maurice McDonald; in 1948 they reorganized their business as a hamburger stand using production line principles. Businessman Ray Kroc joined the company as a franchise agent in 1955. He subsequently purchased the chain from the McDonald brothers and oversaw its worldwide growth.A McDonald's restaurant is operated by either a franchisee, an affiliate, or the corporation itself. McDonald's Corporation revenues come from the rent, royalties, and fees paid by the franchisees, as well as sales in company-operated restaurants. In 2012, McDonald's Corporation had annual revenues of $27.5 billion, and profits of $5.5 billion. According to a 2012 report by the BBC, McDonald's is the world's second largest private employer with 1.9 million employees, 1.5 million of whom work for franchises   more
2 votes
1 comment
McDonald's - Voter Comments

Jack in the Box

Jack in the Box is an American fast-food restaurant founded in 1951 by Robert O. Peterson in San Diego, California, where it is still headquartered today. In total, the chain has 2,200 locations, primarily serving the West Coast of the United States... . Food items include a variety of hamburger and cheeseburger sandwiches along with selections of international themed foods such as tacos and eggrolls. The company also operates the Qdoba Mexican Grill chain   more
1 vote
0 comments
Jack in the Box - Voter Comments
No Comments
Vote & Comment
5

Wendy's is an international fast food chain restaurant founded by Dave Thomas on November 15, 1969, in Columbus, Ohio, United States. The company moved its headquarters to Dublin, Ohio, on January 29, 2006. As of March 1999, Wendy's was the world's ... third largest hamburger fast food chain with approximately 6,650 locations, following Burger King's 12,000+ locations and McDonald's' 31,000+ locations. On April 24, 2008, the company announced a merger with Triarc, the parent company of Arby's. Despite the new ownership, Wendy's headquarters remained in Dublin. Previously, Wendy's had rejected more than two buyout offers from Triarc Companies Inc. Following the merger, Triarc became known as Wendy's/Arby's Group, a publicly traded company.Approximately 77% of Wendy's restaurants are franchised, the majority of which are located in North America. Wendy's and its affiliates employ more than 47,000 people in its global operations. In fiscal year 2006, the firm had $2.469 billion in total sales. While Wendy's sets standards for exterior store appearance, food quality and menu, individual owners have control over hours of operations, interior decor, pricing and staff uniforms and wages   more
1 vote
0 comments
Wendy's - Voter Comments
No Comments
Vote & Comment
6

In-N-Out Burgers, Inc. Is a regional chain of fast food restaurants with locations in the American Southwest. Founded in Baldwin Park, California, in 1948 by Harry Snyder and his wife Esther Snyder, the chain is currently headquartered in Irvine. In... -N-Out Burger has slowly expanded outside Southern California into the rest of the state as well as into Arizona, Nevada, Utah, and Texas. The current owner is Lynsi Snyder, the only grandchild of the Snyders.As of December 12, 2013, In-N-Out employed over 18,000 staff and had 290 locations with no location more than a day's drive from a regional distribution center. As the chain has expanded, it has opened several distribution centers in addition to its original Baldwin Park location. The new facilities, located in Lathrop, California; Phoenix, Arizona; Draper, Utah; and Dallas, Texas, will provide for potential future expansion into other parts of the country.In-N-Out Burger has resisted franchising its operations or going public; one reason is the prospect of quality or customer consistency being compromised by excessively rapid business growth   more
1 vote
0 comments
In-N-Out Burger - Voter Comments
No Comments
Vote & Comment
7

Wayback Burgers, previously known as Jake's Wayback Burgers, is a fast casual restaurant chain based out of Cheshire, Connecticut. Wayback serves typical hamburger restaurant foods such as hamburgers, hot dogs, chicken sandwiches, milkshakes and sal... ads along with a variety of regional selections. Originally created in Newark, Delaware, Wayback began expansion in the late 2000s, with over 70 locations currently operating and many more planned. In 2013, it was announced that the chain was expanding internationally to an additional 28 counties, with locations in the Middle East and North Africa slated to open in early 2014. The second international agreement signed is with Argentina   more
0 votes
0 comments
Jake's Wayback Burgers - Voter Comments
No Comments
Vote & Comment
8

Johnny Rockets is an American restaurant franchise whose concept is to create a classic American restaurant atmosphere. The theme is the diner-style restaurant that had become a common sight by the 1950s. Decor includes Coca-Cola advertising featuri... ng nearly life-size cardboard illustrations of women in World War II armed services uniforms, individual jukebox stations, chrome accents and red vinyl seats. The staff at some locations are known to sing and dance every half-hour. Making a smiley face with ketchup on the paper plate when served French fries is a Johnny Rockets trademark.The menu, presentation, counter seating and grilling area are based on an original restaurant from 1947, The Apple Pan in West Los Angeles. The restaurants feature a small two-sided menu, hamburgers wrapped in paper on cardboard plates, hamburgers grilled-to-order in full view of the counter-seated customers   more
0 votes
0 comments
Johnny Rockets - Voter Comments
No Comments
Vote & Comment
Leave a comment...
(Maximum 900 words)