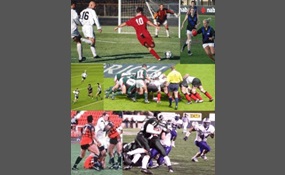 Which football is rougher and more injury-prone than the other?

Inviting the Yanks, Canucks, Brits, and Aussies to have a say and vote in which of the football codes listed are deemed "manlier" than the other due to the blood count and broken bones.

Though well-protected players are also susceptible to injuries on the body from high-impact collisions by the opposition due to the aggressive nature of the sport, though players (most of them) are conditioned and trained to brace and take on such p... hysical collisions. Despite usage of helmets head-related injuries are prevalent as the brain is violently rocked during game play, leading to post-career concussions and trauma similar to those found in boxing. Gridiron has the most varied set of tackles allowed out of all the other football codes, enhancing the possibility to injure players in different ways. Only saving grace is the constant stop-start method of playing in Gridiron, giving players a breather and time to nurse their injuries and be switched out as there's no limit on substitutions   more
6 votes
2 comments
Gridiron football - Voter Comments

FreedomBeforeEquality says2015-09-08T18:36:55.2560185Z
Report Post
These guys arent nearly as agile and their gear impedes free movement. They also have players several magnitudes larger than the other two sports ... (Bills avg o-liner in 2014 was 325lbs). It can be a pretty bad combination on the bones. And thats if only one of them hits you (or falls on you). Quite a few of them all at once ... night night.

Jimbus says2015-09-10T01:29:12.5278490Z
Report Post
I play gridiron football, and there are injuries left and right. I also play rugby. Throughout my rugby experience, I have only seen 1 concussion. For those of you who are considering voting rugby as the most dangerous football code, please note that rugby is not as violent as it looks.
Vote & Comment
2

Rugby football (and Aussie rules to an extent)

A combination of the two above protection-wise, with more protective gear than soccer but far less than Gridiron. Like Gridiron, Rugby players are also conditioned to take on the similarly physically-aggravating sport. Like soccer players (but unlik... e Gridiron) Rugby is played consistently and continuously, granting little breaks outside of intermissions and only providing a limited number of player substitutions, essentially forcing players to rely on resiliency and durability to take on the opposition throughout 80 minutes (40 per half)   more
4 votes
0 comments
Rugby football (and Aussie rules to an extent) - Voter Comments
No Comments
Vote & Comment
3

Relative lack of protective gear for players outside of shin guards. Players are exposed to multiple injury-prone scenarios such as kicks to the head, gut, or legs while fighting for possession. Head collisions are also prevalent when the ball is in...  mid-air and sometimes players resort to elbowing their opponents. Goalkeepers are also known for punching players while attempting to prevent the ball from going inside their net, whether accidental or otherwise, and are just as vulnerable when diving to the feet of a player with the ball, exposing them to a possible kick to the face or body regardless if the player tries to avoid them. In professional competition the number of substitutions is limited to three, rendering players playing from the beginning of the match to play the entire match, having to rely on stamina and endurance as well as resisting cramping and possible muscle tearing due to fatigue   more
0 votes
0 comments
Association football - Voter Comments
No Comments
Vote & Comment
Leave a comment...
(Maximum 900 words)

Hawlucha says2015-09-08T18:42:48.2238811Z
Report Post
I've played both soccer and gridiron and personally soccer's rougher than gridiron is. In Gridiron once tackled (I was a wide receiver and sometimes opted as a punter) I had a breather and play was stopped for the moment and the game resumed from the point were I was blitzed (and for some reason it felt great laying on the grass in the midst of getting bruised). In soccer on the other hand once we were out of subs I had to play the remainder of the match limping because some a-hole mistimed his sweep and lunged at my calf instead of the ball. Didn't help that I was the goalkeeper rushing towards the ball to kick it away.
Privacy Policy | Terms of Use
Sitemap | View Desktop Version
©2021 Debate.org. All rights reserved.