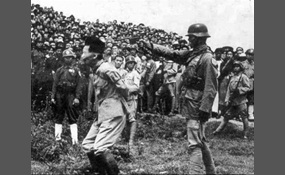 Which form of emotional distancing do you think makes it "easiest" to kill people?

You only have to read the first two sentences or so to get what each mean. Not like "easy" as in simple, but easy as in being okay with killing the person and more likely to pull the trigger/press the button/ thrust the knife/ pull the pin/FIRE THE LASER.

PetersSmith says2015-04-10T11:25:39.9073177-05:00
Report Post
I would go with cultural distance, but I'm choosing this because too many countries are racially diverse and most soldiers try to morally justify themselves when they kill someone.
Vote & Comment
2

Which includes the sterile Nintendo-game unreality of killing through a TV screen, a thermal sight, a sniper sight, or some other kind of mechanical buffer that permits the killer to deny the humanity of his victim. Social distance is generally fadi... ng as a form of killing enabling in Western war. But even as it disappears in this more egalitarian age, it is being replaced by a new, technologically based form of psychological distance. During the Gulf War this was referred to as "Nintendo warfare," which evolved into "video game combat" in Iraq and Afghanistan. The infantry kills the enemy up close and personal, but in recent decades the nature of this close-in battle has changed significantly. Until the 1980s in the U.S. Army the night sight was a rare and exotic piece of equipment. Now we fight primarily at night, and there is a thermal-imagery device or a night-vision device for almost every combat soldier. Thermal imagery "sees" the heat emitted by a body as if it were light. Thus it works to s~ through rain, fog, and smoke. It permits you to perceive through camouflage, and it makes it possible to detect enemy soldiers deep in wood lines and vegetation that would once have completely concealed them. Night-vision devices provide a superb form of psychological distance by converting the target into an inhuman green blob. The complete integration of thermal-imagery technology into the modern battlefield has extended to daylight hours ~he mechanical distance process that currently exists during the night. Now, in many cases, the battlefield appears to every soldier as it did to Gad, an Israeli tank gunner who told Holmes that "you see it all as if it were happening on a TV screen .... It occurred to me at the time; I see someone running and I shoot at him, and he falls, and it all looks like something on TV. I don't see people, that's one good thing about it.   more
3 votes
0 comments
Mechanical Distance (Example: Drone Strikes) - Voter Comments
No Comments
Vote & Comment
3

Which considers the impact of a lifetime of practice in thinking of a particular class as less than human in a socially stratified environment. While working as a sergeant in the 82d Airborne Division in the 1970s, I once visited a sister battalion'... s operations office. Most such offices have a large in-out roster as you come in the door. Usually these rosters have a list of all the people in the office, organized by rank; but this one had a different t:wist. On top of the list were the officers, then there was a divider section labeled "Swine Log," and then there was a list of all the enlisted personnel in the office. This concept of the "Swine Log" was a fairly common one, and although it was usually used in good humor, and usually more subtly, there is a social distance between officers and enlisted personnel. I have been a private, a sergeant, and an officer. My wife, my children, and I have all experienced this class structure and the social distance that goes with it. Officers, noncommissioned officers (NCOs), and enlisted members (EMs) all have separate clubs on a military base. Their wives often go to separate social functions. Their families usually live in separate housing areas. To understand the role of the Swine Log in the military we must understand how hard it is to be the one to give the orders that will send your friends to their deaths, and how easy is the alternative of surrendering honorably and ending the horror. The essence of the military is that to be a good leader you must truly love (in a strangely detached fashion) your men, and then you must be willing to kill (or at least give the orders that will result in the deaths of) that which you love. The paradox of war is that those leaders who are most willing to endanger that which they love can be the ones who are most liable to win, and therefore most likely to protect their men. The social class structure that exists in the military provides a denial mechanism that makes it possible for leaders to order their men to their deaths. But it makes military leadership a very lonely thing. This class structure is even more pronounced in the British army. During my year at the British Army Staff College, the British officers who were my friends felt very strongly (and I agree with them) that their lifetime of experience in the British class system made them better officers. The influence of social distance must have been very powerful in ages past, when all officers came from the nobility and had a lifetime's experience in wielding the power of life and death. In nearly all historical battles prior to the age of Napoleon, the serf who looked down his spear or musket at the enemy saw another hapless serf very much like himself, and we can understand that he was not particularly inclined to kill his mirror image. And so it is that the great majority of dose-combat killing in ancient history was not done by the mobs of serfs and peasants who formed the great mass of combatants. It was the elite, the nobility, who were the real killers in these battles, usually in the pursuit phase after the battle, on horseback or from chariots, and they were enabled by, among other things, social distance   more
0 votes
0 comments
Social Distance (Example: Russian Civil War) - Voter Comments
No Comments
Vote & Comment
Leave a comment...
(Maximum 900 words)

Mathgeekjoe says2015-04-10T11:45:44.5385953-05:00
Report Post
PetersSmith, people have the ability to turn off the moral switch in their brain when they deal with their enemy, for everything but their enemy they have emotions, empathy, etc.

Mathgeekjoe says2015-04-10T11:48:44.8798831-05:00
Report Post
Scientifically it is correct. If you look at people who commit horrible acts against their enemies, they don't act the same with people who are not their enemies. I remember reading a documentary of it.

Mathgeekjoe says2015-04-10T11:52:26.3559060-05:00
Report Post
" As I said, it doesn't count as emotional distancing in this context." I only said what I said because you said "So being a psychopath makes it easiest to kill people? That only accounts for 2% of all soldiers." I was just saying that there is mechanism in the brain that cause that without the person being a psychopath. In your poll I picked Social distance.

Kreakin says2015-04-10T11:55:32.0164534-05:00
Report Post
Empathy can be switched off or selective by some. A driving ideology and someone to take responsibility helps as well. Zero Degrees of Empathy by Simon Baron-Cohen is an interesting read.

PetersSmith says2015-04-10T11:58:06.6346334-05:00
Report Post
Kreakin: There is such a thing as a "natural soldier": the kind who derives his greatest satisfaction from male companionship, from excitement, and from the conquering of physical obstacles. He doesn't want to kill people as such, but he will have no objections if it occurs within a moral framework that gives him justification.

PetersSmith says2015-04-10T12:06:22.3661486-05:00
Report Post
Mathgeekjoe: No, it's actually the least common, and if you read the mechanical distancing one it says how social distancing "is generally fading as a form of killing enabling in Western war".

Mathgeekjoe says2015-04-10T12:58:35.4693194-05:00
Report Post
Mathgeekjoe: No, it's actually the least common, and if you read the mechanical distancing one it says how social distancing "is generally fading as a form of killing enabling in Western war. A very small percentage of deaths in wars are from Mechanical distancing, the majority killing in wars seem to be from social distancing. American civil war, American revolutionary war, French revolution, vietnam conflict, etc. all situations where it was easier to kill your opponent by being socially distant from them.

PetersSmith says2015-04-10T13:01:55.0254556-05:00
Report Post
Mathgeekjoe: I never said mechanical distancing is effective, but the description for it is from the same book and states that social distancing is fading.

Kreakin says2015-04-10T13:02:26.8960552-05:00
Report Post
I find it hard to choose an option tbh. I guess all but mechanical distance gives hands on experience of killing and as so probably makes ones convictions harder to disown. Seeing and causing death up close hardens peoples to it more maybe.
Privacy Policy | Terms of Use
Sitemap | View Desktop Version
©2020 Debate.org. All rights reserved.