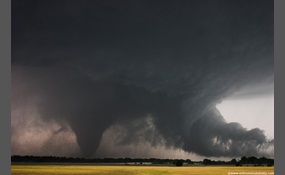 Which form of severe weather scares you the most?

A funnel cloud is a funnel-shaped cloud of condensed water droplets, associated with a rotating column of wind and extending from the base of a cloud but not reaching the ground or a water surface. A funnel cloud is usually visible as a cone-shaped ... or needle like protuberance from the main cloud base. Funnel clouds form most frequently in association with supercell thunderstorms.If a funnel cloud touches the ground it becomes a tornado. Most tornadoes begin as funnel clouds, but many funnel clouds do not make ground contact and so do not become tornadoes. Also, a tornado does not necessarily need to have an associated condensation funnel—if strong cyclonic winds are occurring at the surface, then the feature is a tornado. Some tornadoes may appear only as a debris swirl, with no obvious funnel cloud extending below the rotating cloud base. A funnel cloud is quite noticeable as it passes overhead aloft. The sounds heard are described as buzzing bees, roaring, a sucking sound, or a waterfall-like sound. A pressure drop is often noticeable as well, in the form of popping ears in anyone below the funnel cloud. A funnel cloud that touches down on, or moves over water is a tornado or a waterspout   more
19 votes
0 comments
Tornado - Voter Comments
No Comments
Vote & Comment
2

Hurricane Katrina was the deadliest and most destructive Atlantic tropical cyclone of the 2005 Atlantic hurricane season. It was the costliest natural disaster, as well as one of the five deadliest hurricanes, in the history of the United States. Ka... trina was the sixth most intense Atlantic hurricane ever, part of the 2005 season that included three of the six most intense Atlantic hurricanes ever. At least 1,833 people died in the hurricane and subsequent floods, making it the deadliest U.S. hurricane since the 1928 Okeechobee hurricane; total property damage was estimated at $81 billion, nearly triple the damage brought by Hurricane Andrew in 1992.Hurricane Katrina formed over the Bahamas on August 23, 2005 and crossed southern Florida as a moderate Category 1 hurricane, causing some deaths and flooding there before strengthening rapidly in the Gulf of Mexico. The hurricane strengthened to a Category 5 hurricane over the warm Gulf water, but weakened before making its second landfall as a Category 3 hurricane on the morning of Monday, August 29 in southeast Louisiana. It caused severe destruction along the Gulf coast from central Florida to Texas, much of it due to the storm surge. The most significant number of deaths occurred in New Orleans, Louisiana, which flooded as the levee system catastrophically failed, in many cases hours after the storm had moved inland. Eventually 80% of the city and large tracts of neighboring parishes became flooded, and the floodwaters lingered for weeks. However, the worst property damage occurred in coastal areas, such as all Mississippi beachfront towns, which were flooded over 90% in hours, as boats and casino barges rammed buildings, pushing cars and houses inland, with waters reaching 6–12 miles from the beach   more
5 votes
0 comments
Hurricane - Voter Comments
No Comments
Vote & Comment
3

A flood is an overflow of water that submerges land which is usually dry. The European Union Floods Directive defines a flood as a covering by water of land not normally covered by water. In the sense of "flowing water", the word may also be applied...  to the inflow of the tide. Flooding may occur as an overflow of water from water bodies, such as a river or lake, in which the water overtops or breaks levees, resulting in some of that water escaping its usual boundaries, or it may occur due to an accumulation of rainwater on saturated ground in an areal flood. While the size of a lake or other body of water will vary with seasonal changes in precipitation and snow melt, these changes in size are unlikely to be considered significant unless they flood property or drown domestic animals.Floods can also occur in rivers when the flow rate exceeds the capacity of the river channel, particularly at bends or meanders in the waterway. Floods often cause damage to homes and businesses if they are in the natural flood plains of rivers. While riverine flood damage can be eliminated by moving away from rivers and other bodies of water, people have traditionally lived and worked by rivers because the land is usually flat and fertile and because rivers provide easy travel and access to commerce and industry   more
1 vote
0 comments
Flood - Voter Comments
No Comments
Vote & Comment
4

A blizzard is a severe snowstorm caused by strong sustained winds of at least 56 km/h and lasting for a prolonged period of time – typically three hours or more. A ground blizzard is a weather condition where snow is not falling but loose snow on th... e ground is lifted and blown by strong winds   more
0 votes
0 comments
Blizzard - Voter Comments
No Comments
Vote & Comment
Leave a comment...
(Maximum 900 words)