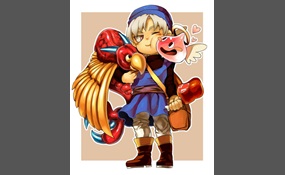 Pokemon Red/Blue/Yellow (1st Gen.) VS. Dragon Warrior Monsters (1st Gen.) in terms of building the best possible team of monster to fight with - Which game required the greatest amount of strategy?

Pokemon Red/Blue are role-playing video games developed by Game Freak and published by Nintendo for the Game Boy in September 1998. The main character was Ash Ketchum who would catch Pokemon with poke-balls and then travel with a team of 7 Pokemon w... ho would increase in skill and abilities as they leveled up from battling other Pokemon. There were 15 Pokemon types and a grand total of 151 possible Pokemon to catch. The three main objectives were to catch all Pokemon, defeat all gym leaders, and then defeat the Elite Four to solidify your position as the greatest. Please visit this page for further information before placing a vote: http://en.Wikipedia.Org/wiki/Pok%C3%A9mon_Red_and_Blu   more
5 votes
0 comments
Pokemon Red/Blue - Voter Comments
No Comments
Vote & Comment
2

Dragon Warrior Monsters is the first video game in the Dragon Quest Monsters series. It was released in Japan by Enix on September 25, 1998, and co-published by Eidos Interactive in Europe in 1999 and in North America in 2000. The main character was...  Terry who would bribe monsters with meat in order to get them to join him along his journey. The team consists of three monsters who would follow the character throughout the dungeons for a 3 on 3 turn based battle system which was very similar to 1st gen Pokemon minus the other 2 active fighting monsters, this also included them leveling up based on battles which was also just like the Pokemon XP system. There are only 10 "families" of monsters unlike Pokemon's original 15 types. They made up for this though by introducing a breeding system which would almost always result in a new type of monster - meaning that one must truly practice wisdom when deciding to breed his two most powerful monsters. The main objective for Terry was to defeat all the boss monsters at the end of each dungeon to finally partake in the Starry Night Tournament which would grant a wish to the victor - which in this case was for the safe return of his kidnapped sister. Please visit this page for more information: http://en.Wikipedia.Org/wiki/Dragon_Warrior_Monster   more
0 votes
0 comments
Dragon Warrior Monsters - Voter Comments
No Comments
Vote & Comment
Leave a comment...
(Maximum 900 words)