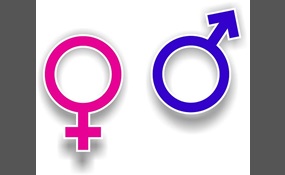 Which gender do you prefer to be in a re

Female (♀) is the sex of an organism, or a part of an organism, which produces ova (egg cells). The ova are defined as the larger gametes in a heterogamous reproduction system, while the smaller, usually motile gamete, the spermatozoon, is produced ... by the male. A female individual cannot reproduce sexually without access to the gametes of a male (an exception is parthenogenesis). Some organisms can reproduce both sexually and asexually   more
3 votes
1 comment
Female - Voter Comments

A male organism is the physiological sex which produces sperm. Each spermatozoon can fuse with a larger female gamete, or ovum, in the process of fertilization. A male cannot reproduce sexually without access to at least one ovum from a female, but ... some organisms can reproduce both sexually and asexually. Most male mammals, including male humans, have a Y chromosome, which codes for the production of larger amounts of testosterone to develop male reproductive organs.Not all species share a common sex-determination system. In most animals, including humans, sex is determined genetically, but in some species it can be determined due to social, environmental or other factors. For example,Cymothoa exigua changes sex depending on the number of females present in the vicinity   more
2 votes
0 comments
Male - Voter Comments
No Comments
Vote & Comment
Leave a comment...
(Maximum 900 words)

Vox_Veritas says2015-10-07T21:23:00.0075907Z
Report Post
Good thing I caught this first comment or else I might've picked male, lol. Still, what kind of relationship are you talking about? Friendship? Romance?