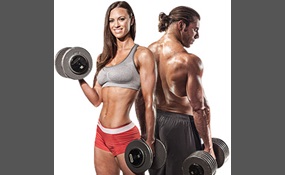 Which gender is physically more strong? Men or women? Of course, my husband's stronger than me, but in general, which is usually stronger?

A male organism is the physiological sex which produces sperm. Each spermatozoon can fuse with a larger female gamete, or ovum, in the process of fertilization. A male cannot reproduce sexually without access to at least one ovum from a female, but ... some organisms can reproduce both sexually and asexually. Most male mammals, including male humans, have a Y chromosome, which codes for the production of larger amounts of testosterone to develop male reproductive organs.Not all species share a common sex-determination system. In most animals, including humans, sex is determined genetically, but in some species it can be determined due to social, environmental or other factors. For example,Cymothoa exigua changes sex depending on the number of females present in the vicinity   more
13 votes
5 comments
Men - Voter Comments

Donderpants says2015-08-19T04:19:53.8288722Z
Report Post
I was going to vote "Women", but then I took a closer look at the description. On average, physical strength is superior on the male side, although physical strength doesn't really matter very much nowadays.

Black-Jesus says2015-08-19T05:31:25.1659982Z
Report Post
Men are stronger because men naturally produce more testosterone, which, in addition to causing body hair growth, lengthening, thickening and loosening vocal chords (making them lower pitch), increasing fat metabolism and altering mental behavior, acts a muscle growth hormone. Both the testicles and the ovaries produce testosterone, but the testicles produce considerably more, this is why women still have body hair, deeper voices than children, and the ability to grow muscles among other effects, but not as much as men.

Feminism is a collection of movements and ideologies which share a common stated aim: to define, establish, and defend equal political, economic, cultural, and social rights for women. This includes seeking to establish equal opportunities for women...  in education and employment. A feminist generally self-defines as advocating for or supporting the rights and equality of women. Feminist theory, which emerged from feminist movements, aims to understand the nature of gender inequality by examining women's social roles and lived experience; it has developed theories in a variety of disciplines in order to respond to issues such as the social construction of sex and gender. Some forms of feminism have been criticized for taking into account only white, middle-class, educated perspectives. This led to the creation of ethnically specific or multiculturalist forms of feminism.Feminist activists campaign for women's rights – such as in contract law, property, and voting – while also promoting bodily integrity, autonomy, and reproductive rights for women   more
5 votes
1 comment
Women - Voter Comments
No Comments
Vote & Comment
Leave a comment...
(Maximum 900 words)

Vox_Veritas says2015-08-19T03:44:48.3852189Z
Report Post
No offense, but this question is a little ridiculous. I don't think that even the most avowed feminist would disagree that men are generally physically stronger than women.

Mister_Man says2015-08-19T04:29:56.1159999Z
Report Post
No it's the patriarchy making people believe men are stronger. Obviously everyone knows men and women are 100% biologically equal, but are too afraid and brainwashed by men to admit it.

Donderpants says2015-08-19T04:31:03.9734830Z
Report Post
I'm afraid, Mister_Man, that the stereotyping is true, because people believe in it- the placebo effect. More men believe they need to be physically strong, and that's top priority.

Black-Jesus says2015-08-20T07:53:39.0899062Z
Report Post
@Donderpants, what are you talking about? While human strength may not be as absolutely necessary now as it once was, it is still not even close to being "of near no importance"

Donderpants says2015-08-20T09:29:32.5675524Z
Report Post
Well you can easily get through life without it. Unless you do manual labour, there's literally no productive purpose to physical strength.

Donderpants says2015-08-20T18:07:13.7861381Z
Report Post
"Everyone does manual labour" Please explain. Do you mean for work? For just randomly needing to carry stuff sometimes? Because I can easily think of exceptions for both. Please do explain where we all do this manual labour- I certainly haven't done it, at least unless you really do count carrying stuff sometimes. And since I live in a country that statistics show to be pretty much the safest to live in, combat skills make no impact on most members of New Zealand's lives.

Black-Jesus says2015-08-20T19:06:56.5831046Z
Report Post
Picking stuff up, pushing things, pulling things, these are useful skills to have. Not everybody readily has powerful tools at hand at all times. It doesn't matter if you can think of exceptions, because it is the majority of the time that matters, and the majority of the time working with objects that require a considerable amount of power to handle in the appropriate manner require physical strength. And combat is necessary anywhere, it doesn't matter where you live; the chances are more than likely that you will need to resort to violence at one point or another unless you plan to just roll over for opposition

Donderpants says2015-08-22T13:54:21.5435726Z
Report Post
Disagree with the combat one. There are many places where combat skills are needed by essentially no one. NZ is one of those. The odds are pretty low of you ever needing to resort to violence. Yes, you need to be able to pick stuff up. However, I don't imagine there are terribly many things you'd need to pick up that women could not carry that men could. The advantage is not that big. It's relatively unimportant. I'm not saying it's completely unimportant, but in modern life it's not too big a deal.
Privacy Policy | Terms of Use
Sitemap | View Desktop Version
©2021 Debate.org. All rights reserved.