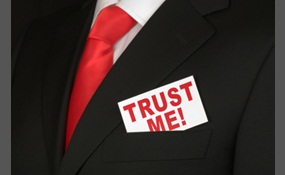 Which Group do you trust the least?

A Muslim, sometimes spelled Moslem, is an adherent of Islam, a monotheistic Abrahamic religion based on the Quran. Muslims consider the Quran to be the verbatim word of God as revealed to prophet Muhammad. They also follow the teachings and practice... s of Muhammad as recorded in traditional accounts called hadith. "Muslim" is an Arabic word meaning "one who submits to God". A female Muslim is sometimes called a "Muslimah".Muslims believe that God is eternal, transcendent and absolutely one. They hold that God is incomparable, self-sustaining and neither begets nor was begotten. They also believe that Islam is the complete and universal version of a primordial faith that has been revealed before through many prophets including Abraham, Moses, Ishmael and Jesus. Muslims also believe that these previous messages and revelations have been partially changed or corrupted over time and that the Qur'an is the final unaltered revelation from God.Most Muslims accept as a Muslim anyone who has publicly pronounced the Shahadah which states:I testify that there is no god except for the God, and I testify that Muhammad is the Messenger of God   more
6 votes
0 comments
Muslims - Voter Comments
No Comments
Vote & Comment
3

Atheist is a death metal band from Florida, founded in 1984 by drummer Steve Flynn and singer/guitarist Kelly Shaefer. Atheist are noted for their highly technical playing style, often reminiscent of jazz. Their album Unquestionable Presence release... d in 1991 is widely regarded as seminal and a landmark of the genre   more
1 vote
0 comments
Atheists - Voter Comments
No Comments
Vote & Comment
5

Anyone who says trust me

The term black people is an everyday English-language phrase, often used in socially-based systems of racial classification or of ethnicity to describe persons who are defined as belonging to a "black" ethnicity in their particular country, typicall... y having a degree of Sub-Saharan African ancestry, or who are perceived to be dark-skinned relative to other "racial groups".Different societies, such as Australia, Brazil, the United Kingdom, the United States and South Africa apply differing criteria regarding who is classified as "black", and these criteria have also varied over time. In some countries, social variables affect classification as much as skin-color, and the social criteria for "blackness" vary. In South Africa, mixed-race people are not considered to be "black", and in other regions, such as Australia and Melanesia, the term "black" has been applied to, and used by, populations with a very different history   more
0 votes
0 comments
Black People - Voter Comments
No Comments
Vote & Comment
8

"Who is a Jew?" is a basic question about Jewish identity and considerations of Jewish self-identification. The question is based in ideas about Jewish personhood which have cultural, religious, genealogical, and personal dimensions. The definition ... of who is a Jew varies according to whether it is being considered by Jews based on normative religious statutes or self-identification, or by non-Jews for other reasons. Because Jewish identity can include characteristics of an ethnicity, a religion, or conversion, the definition depends on many aspects that must be considered.According to the simplest definition used by Jews for self-identification, a person is a Jew by birth, or becomes one through religious conversion. However, there are differences of opinion among the various branches of Judaism in the application of this definition, including:The effect of mixed parents: i.e. whether a person of mixed Jewish and non-Jewish parents should be considered Jewish.Conversion: i.e. what processes of conversion should be considered valid.Historical loss of Jewish identity: i.e. whether a person's or group's actions or circumstances in his or her community's life should affect his or her status as Jewish or non-Jewish   more
0 votes
0 comments
Jews - Voter Comments
No Comments
Vote & Comment
Leave a comment...
(Maximum 900 words)

EliasPredko says2014-06-12T16:33:02.3605645-05:00
Report Post
Of course, atheists, blame the conservative Christians! All you guys do anyway is follow each other like zombies. We use theology and philosophy with our faith, but your atheist leaders have warped the image of Christians into lying, hating, terrorizing, and stupid. You atheists may want to reconsider what you have been taught.