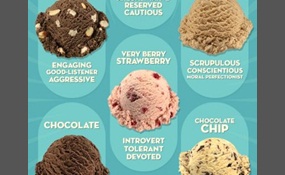 Which Ice Cream place is your favorite?

Baskin-Robbins is the world's largest chain of ice cream specialty shops and is based in Canton, Massachusetts. It was founded in 1945 by Burt Baskin and Irv Robbins in Glendale, California.The company is known for its "31 flavors" slogan, with the ... idea that a customer could have a different flavor every day of any month. The slogan came from the Carson-Roberts advertising agency in 1953. Baskin and Robbins believed that people should be able to sample flavors until they found one they wanted to buy, hence their famous small pink spoons. The company has introduced more than 1,000 flavors since 1945   more
1 vote
0 comments
Baskin-Robbins - Voter Comments
No Comments
Vote & Comment
3