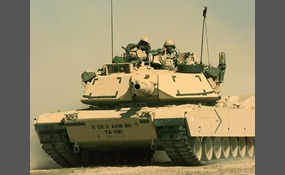 Which if the following tanks is best?

The M1 Abrams is an American third-generation main battle tank produced by the United States. It is named after General Creighton Abrams, former Army Chief of Staff and Commander of U.S. military forces in the Vietnam War from 1968 to 1972. Highly m... obile, designed for modern armored ground warfare, the M1 is well armed and heavily armored. Notable features include the use of a powerful gas turbine engine, the adoption of sophisticated composite armor, and separate ammunition storage in a blow-out compartment for crew safety. Weighing nearly 68 short tons, it is one of the heaviest main battle tanks in service.The M1 Abrams entered U.S. service in 1980, replacing the M60 tank. It served for over a decade alongside the improved M60A3, which had entered service in 1978. The M1 remains the principal main battle tank of the United States Army and Marine Corps, and the armies of Egypt, Kuwait, Saudi Arabia, Australia, and Iraq.Three main versions of the M1 Abrams have been deployed, the M1, M1A1, and M1A2, incorporating improved armament, protection and electronics. These improvements, as well as periodic upgrades to older tanks, have allowed this long-serving vehicle to remain in front-line service. The M1A3 was under early development as of 2009   more
7 votes
2 comments
M1 Abrams - Voter Comments

The Leopard 2 is a main battle tank developed by Krauss-Maffei in the early 1970s for the West German Army. The tank first entered service in 1979 and succeeded the earlier Leopard 1 as the main battle tank of the German Army. Various versions have ... served in the armed forces of Germany and twelve other European countries, as well as several non-European nations. More than 3,480 Leopard 2s have been manufactured. The Leopard 2 first saw combat in Kosovo with the German Army and has also seen action in Afghanistan with the Danish and Canadian contributions to the International Security Assistance Force.There are two main development batches of the tank, the original models up to Leopard 2A4, which have vertically faced turret armour, and the "improved" batch, namely the Leopard 2A5 and newer versions, which have angled arrow-shaped turret appliqué armour together with other improvements. All models feature digital fire control systems with laser rangefinders, a fully stabilized main gun and coaxial machine gun, and advanced night vision and sighting equipment. The tank has the ability to engage moving targets while moving over rough terrain   more
2 votes
0 comments
Leopard 2 - Voter Comments
No Comments
Vote & Comment
3

The T-90 is a Russian third-generation main battle tank that is essentially a modernisation of the T-72B, incorporating many features of the T-80U. It is currently the most modern tank in service with the Russian Ground Forces and Naval Infantry. Al... though a development of the T-72, the T-90 uses a 125mm 2A46 smoothbore tank gun, 1G46 gunner sights, a new engine, and thermal sights. Standard protective measures include a blend of steel, composite armour, Smoke mortars, Kontakt-5 explosive-reactive armor, laser warning receivers, Nakidka camouflage and the Shtora infrared ATGM jamming system. The EMT-7 electromagnetic pulse creator has been used in testing but not fitted to T-90s in active service. It is designed and built by Uralvagonzavod, in Nizhny Tagil, Russia. Since 2011, the Russian armed forces have ceased ordering the T-90, and are instead waiting for the development of the Universal Combat Platform T-99 that is expected to enter service in 2020   more
1 vote
1 comment
T-90 - Voter Comments

The Merkava is a main battle tank used by the Israel Defense Forces. The tank began development in 1973 and entered official service in 1979. Four main versions of the tank have been deployed. It was first used extensively in the 1982 Lebanon War. T... he name "Merkava" was derived from the IDF's initial development program name.It is designed for rapid repair of battle damage, survivability, cost-effectiveness and off-road performance. Following the model of contemporary self-propelled howitzers, the turret assembly is located closer to the rear than in most main battle tanks. With the engine in front, this layout is intended to grant additional protection against a frontal attack, especially for the personnel in the main hull, like the driver. It also creates more space in the rear of the tank that allows increased storage capacity, as well as a rear entrance to the main crew compartment allowing easy access under enemy fire. This allows the tank to be used as a platform for medical disembarkation, a forward command and control station, and an armoured personnel carrier. The rear entrance's clamshell-style doors provide overhead protection when off- and on-loading cargo and personnel   more
0 votes
0 comments
Merkava - Voter Comments
No Comments
Vote & Comment
5

The FV4034 Challenger 2 is a British main battle tank currently in service with the armies of the United Kingdom and Oman. It was designed and built by the British company Vickers Defence Systems.Challenger 2 is an extensive redesign of the Challeng... er 1. Although the hull and automotive components seem similar, they are of a newer design and build than those of the Challenger 1, and fewer than 5% of components are interchangeable. Challenger 2 replaced Challenger 1 in service with the British Army and is also used by the Royal Army of Oman. It has seen operational service in Bosnia, Kosovo and Iraq   more
0 votes
0 comments
Challenger - Voter Comments
No Comments
Vote & Comment
6

The Type 99, also known as ZTZ-99 and WZ-123, developed from the Type 98G, is a third generation main battle tank fielded by the Chinese People's Liberation Army. It is made to compete with other modern tanks. It is currently the most advanced MBT f... ielded by China. The ZTZ-99 MBT is a successor to the Type 98G tank manufactured for the People's Liberation Army   more
0 votes
0 comments
Type 99 - Voter Comments
No Comments
Vote & Comment
7

The K2 Black Panther is a fourth generation South Korean main battle tank that will replace most of the various models of M48 Patton tanks and complement the K1 series of main battle tanks now fielded by the Republic of Korea. The K2 is not being ma... ss-produced due to serious troubles of transmission and main engine. The K2 Black Panther is the second most expensive tank in the world behind only the AMX-56 in price cost. A K2 costs over US$8.8 million per unit   more
0 votes
0 comments
K2 Black Panther - Voter Comments
No Comments
Vote & Comment
8

The Type 10 is a 4th-generation main battle tank that the Japan Ground Self Defense Force has been equipped with, and boasts significant enhancements in its capability to respond to anti-tank warfare, mobile strikes, special operations force attacks... , and other contingencies   more
0 votes
0 comments
Type 10 - Voter Comments
No Comments
Vote & Comment
9

The AMX Leclerc, is a main battle tank built by GIAT, now Nexter of France. It was named in honour of General Philippe Leclerc de Hauteclocque who led the French element of the drive towards Paris while in command of the Free French 2nd Armoured Div... ision in World War II.The Leclerc is in service with the French Army and the army of the United Arab Emirates. In production since 1991, the Leclerc entered French service in 1992, replacing the venerable AMX 30 as the country's main armoured platform. With production now complete, the French Army has a total of 406 Leclercs and the United Arab Emirates Army has 388. The current price in 2011 is €9.3 million, making it the most expensive tank in history   more
0 votes
0 comments
AMX Leclerc - Voter Comments
No Comments
Vote & Comment
10