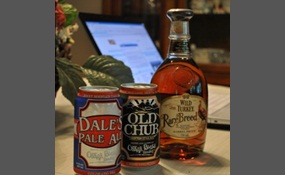 Which is better? Beer or whiskey?

Maker’s Mark is a small-batch bourbon whisky that is distilled in Loretto, Kentucky, by Beam Inc. It is sold in distinctively squarish bottles, which are sealed with red wax, and bottled at 90 U.S. proof. The distillery offers tours, and is part of ... the American Whiskey Trail and the Kentucky Bourbon Trail   more
7 votes
0 comments
Maker's Mark - Voter Comments
No Comments
Vote & Comment
2

Budweiser is a pale lager produced by Anheuser–Busch InBev. Introduced in 1876 by Adolphus Busch it has grown to become one of the highest selling beers in the United States, and is available in over 80 markets worldwide. It is made with up to 30% r... ice in addition to hops and barley malt. Budweiser is produced in various breweries located around the world. It is a filtered beer available in draught and packaged forms   more
0 votes
0 comments
Budweiser - Voter Comments
No Comments
Vote & Comment
4