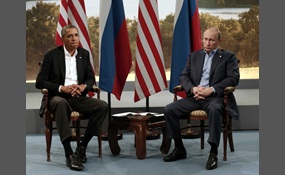 Which is Better? Obama or Putin

So tell me. Which Is?

Barack Hussein Obama II (/bəˈrɑːk huːˈseɪn oʊˈbɑːmə/; born August 4, 1961) is the 44th and current President of the United States. He is the first African American to hold the office. Obama served as a U.S. Senator representing the state of Illinois...  from January 2005 to November 2008, when he resigned following his victory in the 2008 presidential election.Born in Honolulu, Hawaii, Obama is a graduate of Columbia University and Harvard Law School, where he was the president of the Harvard Law Review. He was a community organizer in Chicago before earning his law degree. He worked as a civil rights attorney in Chicago and taught constitutional law at the University of Chicago Law School from 1992 to 2004. He served three terms representing the 13th District in the Illinois Senate from 1997 to 2004   more
18 votes
5 comments
Barack Obama - Voter Comments

Vladimir Vladimirovich Putin has been the President of Russia since 7 May 2012. He previously served as President from 2000 to 2008, and as Prime Minister of Russia from 1999 to 2000 and again from 2008 to 2012. During his term as Prime Minister, he...  was also the Chairman of the United Russia political party.For 16 years Putin served as an officer in the KGB, rising to the rank of Lieutenant Colonel before he retired to enter politics in his native Saint Petersburg in 1991. He moved to Moscow in 1996 and joined President Boris Yeltsin's administration where he rose quickly, becoming Acting President on 31 December 1999 when Yeltsin resigned unexpectedly. Putin won the subsequent 2000 presidential election and was re-elected in 2004. Because of constitutionally mandated term limits, Putin was ineligible to run for a third consecutive presidential term in 2008. Dmitry Medvedev won the 2008 presidential election and appointed Putin as Prime Minister, beginning a period of so-called "tandemocracy". In September 2011, following a change in the law extending the presidential term from four years to six, Putin announced that he would seek a third, non-consecutive term as President in the 2012 presidential election, an announcement which led to large-scale protests in many Russian cities. He won the election in March 2012 and is serving a six-year term   more
5 votes
1 comment
Vladimir Putin - Voter Comments

moletrap says2014-04-28T20:52:24.5033598-05:00
Report Post
If you are looking for who is more successfull in their duites you have to give it to Putin. He has taken contorl of the relationship between Russia and the Nato. He knows Obama is weak on defense and is taking advantge of it. The only reason a tyrant like Putin is reluctant to make moves like he has is because of the consequences posed by the west, primariIy the USA. Eropean contries are tied to Russia by trade needs and have always relied on the U.S. anyway to do their diry work. Putin has regained the support of many Russians as they see him trying to re establish Russia as a major player in the world. Russia tried their hand at demococy but it really didn't work out that well and the average Russian life style decreased. They remember the old days of communism where at least their lives had some simblance of stability. On the other hand Obama has lost his credibility, poll numbers, and many of his own constituents. The most successful boss is Putin.
Vote & Comment
Leave a comment...
(Maximum 900 words)