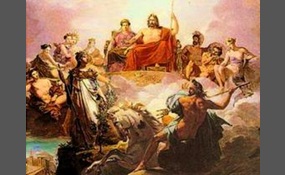 Which is more logical, Polytheism or Monotheism?

Explain why in the comments

"Monotheism" is defined by the Encyclopædia Britannica as belief in the existence of one god or in the oneness of God. The Oxford Dictionary of the Christian Church gives a more restricted definition: "belief in one personal and transcendent God", a... s opposed to polytheism and pantheism. A distinction may be made between exclusive monotheism, and both inclusive monotheism and pluriform monotheism which, while recognising many distinct gods, postulate some underlying unity.Monotheism characterizes the traditions of Atenism, Babism, the Bahá'í Faith, Cao Dai, Cheondoism, Christianity, Deism, Eckankar, Islam, Judaism, the Mormon Community of Christ, Rastafari, Ravidassia religion, Seicho no Ie, Shaivism, Sikhism, Tenrikyo, Vaishnavism, and Zoroastrianism and elements of the belief are discernible in numerous other religions   more
9 votes
3 comments
Monotheism - Voter Comments

They are both Illogical

5 votes
3 comments
They are both Illogical - Voter Comments

"Polytheism" refers to the worship of or belief in multiple deities usually assembled into a pantheon of gods and goddesses, along with their own religions and rituals. In most religions which accept polytheism, the different gods are representation... s of forces of nature or ancestral principles, and can be viewed either as autonomous or as aspects or emanations of a creator God or transcendental absolute principle, which manifests immanently in nature.It is a type of theism. Within theism, it contrasts with monotheism, the belief in a singular God, in most cases transcendent. Polytheists do not always worship all the gods equally, but can be henotheists, specializing in the worship of one particular deity. Other polytheists can be kathenotheists, worshiping different deities at different times.Polytheism was the typical form of religion during the Bronze Age and Iron Age, up to the Axial Age and the development of Abrahamic religions which enforced strict monotheism   more
2 votes
1 comment
Polytheism - Voter Comments

They are both equally logical

It does not matter

Apatheism, also known as pragmatic atheism or practical atheism, is acting with apathy, disregard, or lack of interest towards belief or disbelief in a deity. Apatheism describes the manner of acting towards a belief or lack of a belief in a deity, ... so it applies to both theism and atheism. An apatheist is also someone who is not interested in accepting or denying any claims that gods exist or do not exist. In other words, an apatheist is someone who considers the question of the existence of gods as neither meaningful nor relevant to their life.Apathetic agnosticism claims that no amount of debate can prove or disprove the existence of one or more deities, and if one or more deities exist, they do not appear to be concerned about the fate of humans. Therefore, their existence has little to no impact on personal human affairs and should be of little theological interest.Some apatheists hold that if it were possible to prove that God does or does not exist, their behavior would not change   more
0 votes
0 comments
It does not matter - Voter Comments
No Comments
Vote & Comment
Leave a comment...
(Maximum 900 words)

briantheliberal says2015-05-19T00:38:33.1299103-05:00
Report Post
They are both illogical. I don't see how anyone can think monotheism is "more logical" when they are both equally ridiculous.
Privacy Policy | Terms of Use
Sitemap | View Desktop Version
©2020 Debate.org. All rights reserved.