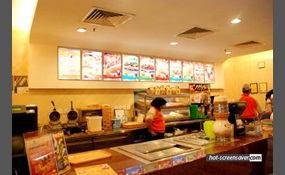 Which is the best fast food restaurant?

Taco Bell is an American chain of fast-food restaurants based in Irvine, California. A subsidiary of Yum! Brands, Inc., they serve a variety of Tex-Mex foods including tacos, burritos, quesadillas, nachos, other specialty items, and a variety of "Va... lue menu" items. Taco Bell serves more than 2 billion customers each year in more than 5,800 restaurants in the U.S., more than 80 percent of which are owned and operated by independent franchisees   more
14 votes
3 comments
Taco Bell - Voter Comments

Wendy's Old Fashioned Hamburgers is an international fast food chain restaurant founded by Dave Thomas on November 15, 1969, in Columbus, Ohio, United States. The company decided to move its headquarters to Dublin, Ohio, on January 29, 2006. As of M... arch 2010, Wendy's was the world's third largest hamburger fast food chain with approximately 6,650 locations, following McDonald's 31,000+ locations and Burger King's 12,000+ locations. On April 24, 2008, the company announced a merger with Triarc, the parent company of Arby's. Despite the new ownership, Wendy's headquarters remained in Dublin. Previously, Wendy's had rejected more than two buyout offers from Triarc Companies Inc. Following the merger, Triarc became known as Wendy's/Arby's Group, a publicly traded company.Approximately 77% of Wendy's restaurants are franchised, the majority of which are located in North America. Wendy's and its affiliates employ more than 46,000 people in its global operations. In fiscal year 2006, the firm had $2.469 billion in total sales. While Wendy's sets standards for exterior store appearance, food quality and menu, individual owners have control over hours of operations, interior decor, pricing and staff uniforms and wages   more
6 votes
1 comment
Wendy's - Voter Comments

Burger King, often abbreviated as BK, is a global chain of hamburger fast food restaurants headquartered in unincorporated Miami-Dade County, Florida, United States. The company began in 1953 as Insta-Burger King, a Jacksonville, Florida-based resta... urant chain. After Insta-Burger King ran into financial difficulties in 1954, its two Miami-based franchisees, David Edgerton and James McLamore, purchased the company and renamed it Burger King. Over the next half century, the company would change hands four times, with its third set of owners, a partnership of TPG Capital, Bain Capital, and Goldman Sachs Capital Partners, taking it public in 2002. In late 2010, 3G Capital of Brazil acquired a majority stake in BK in a deal valued at US$3.26 billion. The new owners promptly initiated a restructuring of the company to reverse its fortunes.At the end of fiscal year 2012, Burger King reported it had almost 12,700 outlets in 73 countries; of these, 66 percent are in the United States and 95 percent are privately owned and operated with its new owners moving to an entirely franchised model by the end of 2013. BK has historically used several variations of franchising to expand its operations. The manner in which the company licenses its franchisees varies depending on the region, with some regional franchises, known as master franchises, responsible for selling franchise sub-licenses on the company's behalf. Burger King's relationship with its franchises has not always been harmonious. Occasional spats between the two have caused numerous issues, and in several instances the company's and its licensees' relations have degenerated into precedent-setting court cases   more
4 votes
1 comment
Burger King - Voter Comments

Chick-fil-A is an American fast food restaurant chain headquartered in the Atlanta suburb of College Park, Georgia, specializing in chicken sandwiches. Founded in 1946, it has been associated with the Southern United States, where it has become a cu... ltural icon. Chick-fil-A has over 1,700 restaurants in 38 U.S. States and the District of Columbia, and is focusing future growth in the American Midwest, the Philippines, South Korea, Alberta, and Southern California.The company's culture is strongly influenced by its founder's Southern Baptist beliefs. Unlike most fast food restaurants and retail chain stores, all Chick-fil-A restaurants are closed for business on Sunday. In 2012, COO Dan Cathy's public statements in opposition to same-sex marriage became the subject of public controversy   more
4 votes
1 comment
Chick-fil-A - Voter Comments

The McDonald's Corporation is the world's largest chain of hamburger fast food restaurants, serving around 68 million customers daily in 119 countries. Headquartered in the United States, the company began in 1940 as a barbecue restaurant operated b... y Richard and Maurice McDonald; in 1948 they reorganized their business as a hamburger stand using production line principles. Businessman Ray Kroc joined the company as a franchise agent in 1955. He subsequently purchased the chain from the McDonald brothers and oversaw its worldwide growth.A McDonald's restaurant is operated by either a franchisee, an affiliate, or the corporation itself. The corporation's revenues come from the rent, royalties and fees paid by the franchisees, as well as sales in company-operated restaurants. McDonald's revenues grew 27 percent over the three years ending in 2007 to $22.8 billion, and 9 percent growth in operating income to $3.9 billion.McDonald's primarily sells hamburgers, cheeseburgers, chicken, french fries, breakfast items, soft drinks, milkshakes, and desserts. In response to changing consumer tastes, the company has expanded its menu to include salads, fish, wraps, smoothies, and fruit   more
2 votes
0 comments
McDonald's - Voter Comments
No Comments
Vote & Comment
7

KFC is a fast food restaurant chain which specializes in fried chicken and is headquartered in Louiseville, Kentucky. It is the world's second largest restaurant chain overall after McDonald's, with over 18,000 outlets in 120 countries and territori... es as of December 2012. The company is a subsidiary of Yum! Brands, a restaurant company which also owns Pizza Hut and Taco Bell.KFC was founded by Harland Sanders, a colorful figure who began selling fried chicken from his roadside restaurant in Corbin, Kentucky, during the Great Depression. Sanders identified the potential of the restaurant franchising concept, and the first "Kentucky Fried Chicken" franchise opened in Utah in 1952. KFC popularized chicken in the fast food industry, diversifying the market by challenging the established dominance of the hamburger. By branding himself as "Colonel Sanders", Harland became a legendary figure of American cultural history, and his image remains prominent in KFC advertising. However, the company's rapid expansion saw it grow too large for Sanders to manage, and in 1964 he sold the company to a group of investors led by John Y. Brown, Jr. And Jack C. Massey   more
2 votes
1 comment
Kfc - Voter Comments

None of the Above, also known as "against all" or a "scratch" vote, is a ballot option in some jurisdictions or organizations, designed to allow the voter to indicate disapproval of all of the candidates in a voting system. It is based on the princi... ple that consent requires the ability to withhold consent in an election, just as they can by voting no on ballot questions.Entities that include "None of the Above" on ballots as standard procedure include India, Greece, the U.S. state of Nevada, Ukraine, Spain, and Colombia. Russia had such an option on its ballots until it was abolished in 2006. Bangladesh introduced this option in 2008. Pakistan introduced this option on ballot papers for the 2013 Pakistan elections but later the Election Commission of Pakistan rejected this.When None of the Above is listed on a ballot, there is the possibility of NOTA receiving a majority or plurality of the vote, and so "winning" the election   more
0 votes
0 comments
None of the above - Voter Comments
No Comments
Vote & Comment
Leave a comment...
(Maximum 900 words)