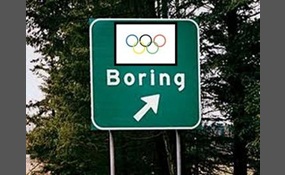 Which is the most BORING sport?

American football is a sport played by two teams of eleven players on a rectangular field 120 yards long by 53.33 yards wide with goalposts at each end. The offense attempts to advance an oval ball down the field by running with or passing it. They ... must advance it at least ten yards in four downs to receive a new set of four downs and continue the drive; if not, they turn over the football to the opposing team. Most points are scored by advancing the ball into the opposing team's end zone for a touchdown or kicking the ball through the opponent's goalposts for a field goal. The team with the most points at the end of a game wins.American football evolved in the United States, originating from the sport of rugby football. The first game of American football was played on November 6, 1869 between two college teams, Rutgers and Princeton, under rules resembling rugby and soccer. A set of rule changes drawn up from 1880 onward by Walter Camp, the "Father of American Football", established the snap, eleven-player teams and the concept of downs, and later rule changes legalized the forward pass, created the neutral zone and specified the size and shape of the football   more
15 votes
1 comment
American football - Voter Comments

wallacespn says2014-06-30T01:29:24.2698265-05:00
Report Post
probably tied with hockey as boring-est , i mean i would run in a race and that would be fun but just watching is pretty boring, and i would say golf, chess, air hockey (are you kidding) ,and fishing/hunting but those aren't real sports i'll say there mental intense games/ don't know how to describe fishing/hunting because its not really a game and thats also a life or death thing so not bashing on those two.... but not sports they require no athletic ability and you could be out of shape to play them, and thank for not putting nascar or especially video games
Vote & Comment
8

EndarkenedRationalist says2013-12-11T09:40:04.4785549-06:00
Report Post
I think the components of "sport" include at least one of the following: Physical exertion (what most people think of) Mental exertion (chess, for example.) Competition with one of the above (both. In chess competitions, people are limited to three games a day maximum because of how exhausted and worn-out they get.) I mean, golf and table tennis have to fit in there somewhere.