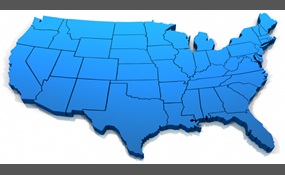 Which is worse: Missouri or California?

California is a state located on the West Coast of the United States. It is the most populous U.S. state, home to one out of eight Americans, and is the third largest state by area. California is bordered by Oregon to the north, Nevada to the east, ... Arizona to the southeast, and the Mexican State of Baja California to the south. It is home to the nation's second and fifth most populous census statistical areas, and eight of the nation's 50 most populated cities. Sacramento is the state capital.What is now California was first settled by various Native American tribes before being explored by a number of European expeditions throughout the 16th and 17th centuries. It was then claimed by the Spanish Empire as part of Alta California in the larger territory of New Spain. Alta California became a part of Mexico in 1821 following its successful war for independence, but would later be ceded to the United States in 1848 after the Mexican-American War. The western portion of Alta California was soon organized as the State of California, which was admitted as the 31st state on September 9, 1850. The California Gold Rush starting in 1848 led to dramatic social and demographic change, with large-scale immigration from the U.S. and abroad and an accompanying economic boom   more
12 votes
5 comments
California - Voter Comments

themightyindividual says2014-05-11T18:28:48.7836069-05:00
Report Post
California is a communist state and threatens to overtake the federal government. Bureaucracy, socialism, liberalism, and environmentalism is the boss. San Franciscans pride themselves in being different from every place else in America, but here's a clue: EVERY PLACE ELSE HAS REASONABLE REAL ESTATE PRICES AND RENTS, POLITICAL AND ECONOMIC FREEDOM, FREE-MARKET CAPITALISM, AND AN OVERALL LIVABLE ECONOMIC CLIMATE. So good luck being different from the world, the world that works some how.

brandan says2014-05-13T09:18:04.6660847-05:00
Report Post
California is mostly populated, Smog covers the entire city of San Diego. It is liberal based principles and morals (non-existent) The WRONG place for raising a child. Missouri is mostly rural except for St.Louis, Kansas city, and Springfield. Its mostly conservative based with good christian morals, which in fact raises better children
Vote & Comment
2

Missouri is a U.S. state located in the Midwestern United States. Missouri is the 21st most extensive and the 18th most populous of the 50 United States. Missouri comprises 114 counties and the independent city of St. Louis.The four largest urban ar... eas are St. Louis, Kansas City, Springfield, and Columbia. Missouri's capital is Jefferson City. The land that is now Missouri was acquired from France as part of the Louisiana Purchase and became known as the Missouri Territory. Part of the Territory was admitted into the union as the 24th state on August 10, 1821.Missouri's geography is highly varied. The northern part of the state lies in dissected till plains while the southern part lies in the Ozark Mountains, with the Missouri River dividing the two. The state lies at the intersection of the three greatest rivers of North America, with the confluence of the Mississippi and Missouri Rivers near St. Louis, and the confluence of the Ohio River with the Mississippi north of the Bootheel. The starting points for the Pony Express, Santa Fe Trail, and Oregon Trail were all located in Missouri. The mean center of United States population as of the 2010 Census is at the town of Plato in Texas County   more
5 votes
0 comments
Missouri - Voter Comments
No Comments
Vote & Comment
No comments yet.
Leave a comment...
(Maximum 900 words)
Privacy Policy | Terms of Use
Sitemap | View Desktop Version
©2021 Debate.org. All rights reserved.