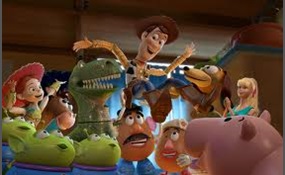 Which is your favorite Toy Story Movie?

Toy Story is a 1995 American computer-animated comedy adventure film produced by Pixar Animation Studios and directed by John Lasseter. Released by Walt Disney Pictures, Toy Story was the first feature-length computer-animated film and the first fil... m produced by Pixar. Toy Story follows a group of anthropomorphic toys who pretend to be lifeless whenever humans are present, and focuses on the relationship between Woody, a pullstring cowboy doll, and Buzz Lightyear, an astronaut action figure. The film was written by John Lasseter, Andrew Stanton, Joel Cohen, Alec Sokolow, and Joss Whedon, and featured music by Randy Newman. Its executive producer was Steve Jobs with Edwin Catmull.Pixar, who had been producing short animated films to promote their computers, was approached by Disney to produce a computer-animated feature after the success of the short Tin Toy, which is told from a small toy's perspective. Lasseter, Stanton, and Pete Docter wrote early story treatments which were thrown out by Disney, who pushed for a more edgy film. After disastrous story reels, production was halted and the script was re-written, better reflecting the tone and theme Pixar desired: that "toys deeply want children to play with them, and that this desire drives their hopes, fears, and actions." The studio, then consisting of a relatively small number of employees, produced the film under minor financial constraints   more
15 votes
2 comments
Toy Story - Voter Comments

Toy Story 2 is a 1999 American computer-animated comedy adventure film produced by Pixar Animation Studios and directed by John Lasseter. Co-directed by Lee Unkrich and Ash Brannon, the film is the sequel to Toy Story. In the film, Woody is stolen b... y a toy collector, prompting Buzz Lightyear and his friends vowing to rescue him. However, Woody finds the idea of immortality in a museum tempting. The film returns many of the original characters and voices from Toy Story and introduces several new characters, including Jessie, Barbie, and Mrs. Potato Head.Disney initially envisioned the film as a direct-to-video sequel and Toy Story 2 began production in a building separated from Pixar and was much smaller scale, with most of the main Pixar staff working on A Bug's Life. When story reels proved promising, Disney upgraded the film to theatrical release, but Pixar was unhappy with the film's quality. Lasseter and the story team re-developed the entire plot in one weekend. Although most Pixar features take years to develop, the established release date could not be moved and the production schedule for Toy Story 2 was compressed into nine months.Despite production struggles, Toy Story 2 opened in November 1999 to wildly successful box office numbers, eventually grossing over $485 million, and highly positive critical reviews. Toy Story 2 has been considered by critics and audiences alike to be one of few sequels that outshine the original, and it continues to be featured frequently on lists of the greatest animated films ever. The film has seen multiple home media releases and a 3-D re-release in 2009. The film's success led to the production of Toy Story 3 in 2010, which was also highly successful   more
7 votes
0 comments
Toy Story 2 - Voter Comments
No Comments
Vote & Comment
3

Toy Story 3 is a 2010 American 3D computer-animated comedy-drama family film, and the third film in the Toy Story series. It was produced by Pixar Animation Studios and distributed by Walt Disney Pictures. Directed by Lee Unkrich, the film was relea... sed worldwide from June through October in Disney Digital 3-D, RealD, and IMAX 3D. Toy Story 3 was also the first film to be released theatrically with Dolby Surround 7.1 sound. The screenplay was written by Michael Arndt, while Unkrich wrote the story along with John Lasseter and Andrew Stanton, respectively director and co-writer of the two first films.The plot focuses on the toys Woody, Buzz Lightyear, and their friends dealing with an uncertain future as their owner, Andy, prepares to leave for college. Actors Tom Hanks, Tim Allen, Joan Cusack, Don Rickles, Estelle Harris, John Ratzenberger, Wallace Shawn, Jeff Pidgeon, Jodi Benson, R. Lee Ermey, John Morris, and Laurie Metcalf reprised their voice-over roles from the previous films. Jim Varney, who played Slinky Dog in the first two films, and Joe Ranft, who portrayed Lenny and Wheezy, both died before production began on Toy Story 3. The role of Slinky Dog was taken over by Blake Clark, while Ranft's characters and various others were written out of the story. New characters include performances by Ned Beatty, Timothy Dalton, Kristen Schaal, Bonnie Hunt, Whoopi Goldberg, Jeff Garlin, Richard Kind, and Michael Keaton   more
7 votes
1 comment
Toy Story 3 - Voter Comments