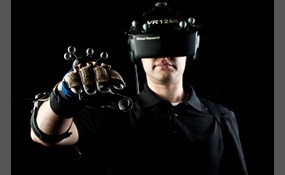 Which is your favorite Virtual Reality device

The Rift is an upcoming virtual reality head-mounted display, being developed by Oculus VR. During its period as an independent company, Oculus VR raised US$2.4 million for the development of the Rift.The consumer version of the product is expected ... to become available sometime in 2015. Oculus released two 'development kits', DK1 in late 2012 and DK2 in mid 2014, to give developers a chance to develop content in time for the Rift's release; these have also been purchased by many virtual reality enthusiasts for general usage.Videos of these development kits featuring both impressions and gameplay have been broadcast on YouTube by a number of popular video game content providers, with home video titled "My 90-year-old grandmother tries the Oculus Rift" going viral, with over 2 million views   more
5 votes
2 comments
Oculus Rift - Voter Comments

AdventurerExplorer says2015-08-15T17:35:01.6056242Z
Report Post
Rather this or Vive. If i had more room at my house i would choose Vive because it would allow me to have a whole room just for VR which would make the experience even better. But at the moment i don't have a room so i would choose Oculus. Morpheus is really cool but im a PC Gamer not really a console guy who wants to get a PS4

HTC unveiled the HTC Vive, a Steam VR headset made in a collaboration with Valve at MWC 2015 - and it's due to hit the shops before the end of the year.The Vive plugs into PCs and work with Valve's mammoth gaming ecosystem and has a design that's re... miniscent of Oculus Rift's Crescent Bay edition.It packs 70 sensors and 360 degree head-tracking and offers a 90Hz refresh rate; the stat that's key to keeping down latency. Elsewhere, there's an accompanying "context aware controller", so you can shoot, move and interact with elements in the virtual world   more
2 votes
1 comment
HTC Vive - Voter Comments

Project Morpheus is the codename for an upcoming virtual reality headset produced by Sony Computer Entertainment. It is designed to be fully functional with the Sony PlayStation 4 and work with the PlayStation Vita. It is currently a prototype and w... ill be released sometime after 2014.It features a high FOV, 6DOF head-tracking, stereoscopic 3D, and unwarped output to a TV for others to view what the user sees   more
0 votes
0 comments
Project Morpheus - Voter Comments
No Comments
Vote & Comment
Leave a comment...
(Maximum 900 words)

sdgevfs says2016-08-27T15:45:29.0480582Z
Report Post
Vive has more choice of games at the moment and are aligned with Steam. Its more of an immersive environment within a room environment.
Privacy Policy | Terms of Use
Sitemap | View Desktop Version
©2021 Debate.org. All rights reserved.