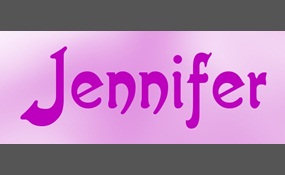 So many celebrities named Jennifer. Who is best?

Jennifer Shrader Lawrence is an American actress. Her first major role was as a lead cast member on the TBS sitcom The Bill Engvall Show. She subsequently appeared in the independent films The Burning Plain and Winter's Bone, for which she received ... her first Academy Award for Best Actress nomination; at the time, she was the second youngest person to receive a nomination in the category.At age 22, Lawrence's performance as Tiffany Maxwell in the David O. Russell-directed romantic comedy Silver Linings Playbook earned her critical acclaim and several awards, including the Golden Globe Award for Best Actress and the Academy Award for Best Actress, making her the second-youngest Best Actress winner at the Oscars. For her supporting role in Russell's comedy-drama American Hustle, she was awarded the Golden Globe Award, the BAFTA Award and received a third Academy Award nomination.Lawrence is also known for playing Raven Darkhölme in the superhero film X-Men: First Class and its sequel X-Men: Days of Future Past   more
5 votes
0 comments
Jennifer Lawrence - Voter Comments
No Comments
Vote & Comment
2

Jennifer Joanna Aniston is an American actress, producer, and businesswoman. She is the daughter of actor John Aniston and actress Nancy Dow. Aniston gained worldwide recognition for portraying Rachel Green on the television sitcom Friends, a role w... hich earned her an Emmy Award, a Golden Globe Award, and a Screen Actors Guild Award. The character was widely popular during the airing of the series and became recognized as one of the greatest female characters in United States television.Aniston has also enjoyed a successful film career. She has played the female protagonist in several romantic comedy films. Her greatest box office hits include Bruce Almighty, The Break-Up, Marley & Me, Just Go with It, Horrible Bosses and We're the Millers, all of which have grossed over $200 million in the United States. Her most critically acclaimed roles were in The Good Girl, for which she was nominated for an Independent Spirit Award for Best Female Lead, and Cake, for which she received Best Actress nominations at the Golden Globe and Screen Actors Guild Award ceremonies. Her other notable films include Along Came Polly, He's Just Not That Into You and The Bounty Hunter   more
3 votes
0 comments
Jennifer Aniston - Voter Comments
No Comments
Vote & Comment
3

Jennifer Anne Garner (born April 17, 1972) is an Emmy-nominated and Golden Globe- and SAG Award-winning American actress. She is best known for her role as CIA agent Sydney Bristow on TV's Alias. Garner was born in Texas, the daughter of Patricia An... n (ne English), an English teacher from Oklahoma, and Billy Jack Garner, a chemical engineer who worked for Union Carbide from Texas. She is the middle child between two sisters, Melissa Garner Wylie (born 1969, resides in Boston, Massachusetts) and Susannah Kay Garner Carpenter (born January 24, 1975 in West Virginia, resides in Charleston, West Virginia). At three years old, Garner began taking ballet lessons which she continued throughout her youth. Although she admitted that she loved dancing, she never had ambitions to become a classical ballerina. When she was four years old, her father's job with Union Carbide relocated her family to Princeton, West Virginia, then to Charleston, West Virginia, where Garner resided until her college years. Garner and her sisters had a very strict home life as children. They were expected to attend church every Sunday, were not allowed to go to movies or wear make-up, and had to wait until they reached the age of 16 before they were allowed to have their ears pierced. Although Susannah broke the rules and had her ears pierced before she was 16, and Melissa had hers pierced at 16, Jennifer did not have her ears pierced until the age of 27. In 1990, Garner graduated from George Washington High School in Charleston, where she played the saxophone. She then enroled at Denison University to study chemistry. Upon realizing that she enjoyed stage acting more than science, Garner changed her major to drama. While at Denison, Garner was initiated into the sorority Pi Beta Phi. Garner graduated from Denison in 1994 and continued her drama education at the National Theater Institute where she was trained by fight choreographer David Chandler, and told she was a natural in stage combat. Keen for immediate experience, she visited her friend, Clayton Kirlew, in New York City in 1995 and decided to take her chances in New York theatre. In New York City, Garner earned $150 a week as an understudy in a play. She was then cast in her first television role, a part in the television movie, Zoya, based on the Danielle Steel novel. Her next acting jobs were in two short-lived television series, Significant Others and Time of Your Life, and a recurring role in the series Felicity. In 1999, Garner was cast in one of the leading roles in the television movie, Aftershock: Earthquake in New York. For this role, she was required to have her ears pierced for the first time ever. However, once filming was completed, she then allowed the piercings to heal up again and could only wear clip-on earrings. She also appeared in the 2000 comedy Dude, Where's My Car?, playing Ashton Kutcher's girlfriend. In 2001, she appeared as a nurse in the big-budget epic Pearl Harbor, co-starring with her future husband Ben Affleck . Later in 2001, J. J. Abrams (who produced Felicity) approached Garner about starring in a new show he was working on for ABC. Garner auditioned for and was cast in the role of Sydney Bristow in the spy drama Alias. The series became a success and Garner won the award for "Best Actress in a Television Series - Drama" at the January 2002 Golden Globes. Alias had just begun a few months beforehand, and Garner won the award with only half the season's episodes aired. The series was successful, concluding in May 2006 after a fifth, abbreviated season (due to Garner's pregnancy, a development that was written into the storyline of the fifth season). Garner's salary for the show began at $45,000 an episode, rising to $150,000 per episode by the series' end. During the show's run, Garner received four consecutive Golden Globe nominations for her lead performance. She also received four consecutive Emmy Award|Emmy nominations for "Outstanding Lead Actress in a Drama..   more
2 votes
0 comments
Jennifer Garner - Voter Comments
No Comments
Vote & Comment
4

Jennifer Lynn Connelly is an American film actress who began her career as a child model. She appeared in magazine, newspaper and television advertising, before she made her debut role in the 1984 crime film Once Upon a Time in America. Connelly con... tinued modeling and acting, starring in films such as the 1986 Labyrinth and the 1991 films Career Opportunities and The Rocketeer. She gained critical acclaim for her work in the 1998 science fiction film Dark City and for her portrayal of Marion Silver in the 2000 drama Requiem for a Dream.In 2002, Connelly won an Academy Award, a Golden Globe Award and a BAFTA Award for her supporting role as Alicia Nash in Ron Howard's 2001 biopic A Beautiful Mind. Her later credits include the 2003 Marvel superhero film Hulk where she played Hulk/Bruce Banner's true love Betty Ross, the 2005 thriller Dark Water, the 2006 drama Blood Diamond, the 2008 science fiction remake The Day the Earth Stood Still, the 2009 romantic comedy He's Just Not That into You and the 2009 biographical drama Creation. She re-teamed with her Requiem for a Dream director Darren Aronofsky and A Beautiful Mind co-star Russell Crowe for the 2014 biblical epic Noah   more
2 votes
0 comments
Jennifer Connelly - Voter Comments
No Comments
Vote & Comment
5

Jennifer Lopez was born in July 24, 1969 in the Bronx, NYC. Currently married to Hispanic singer Marc Anthony, she is the mother of two. Jennifer Lopez, also known as J Lo is a singer, actress, dancer, song writer, record producer, entrepreneur, fas... hion designer and television producer. She was named by Forbes The Riches Person of Latin America descent in Hollywood and the Most Influential Hispanic Entertainer in America by People en Espaol 100 most influential Hispanics list. After finishing school she realized she wanted to be in the show business and her career started dancing in different rap videos and doing some appearances in different TV shows. She became famous when she starred in Selena in 1997 and got a Golden Globe Award nomination for it   more
1 vote
0 comments
Jennifer Lopez - Voter Comments
No Comments
Vote & Comment
6

Jennifer Kate Hudson is an American recording artist, actress and spokesperson. She rose to fame in 2004 as a finalist on the third season of American Idol, coming in seventh place.As an actress, she made her film debut portraying Effie White in Dre... amgirls, for which she gained worldwide acclaim and won the Academy Award for Best Supporting Actress, a Golden Globe Award, a BAFTA Award, an NAACP Image Award and a Screen Actors Guild Award. She has also appeared in such films as Sex and the City, The Secret Life of Bees and Winnie Mandela. As a singer, Hudson won a Grammy Award for her debut album, Jennifer Hudson, released in 2008. The album spawned the hit single "Spotlight" and was certified gold by the RIAA, with sales exceeding a million copies worldwide. Her second album, I Remember Me, was released 2011 and was certified gold by the RIAA, producing the hit "Where You At".In October 2008, after Hudson's mother, brother and nephew were killed in a shooting, Hudson stepped out of the public eye for three months. Hudson resumed her public appearances in 2009 and has since performed at the Super Bowl XLIII, the Grammy Awards, American Idol, and The Oprah Winfrey Show   more
0 votes
0 comments
Jennifer Hudson - Voter Comments
No Comments
Vote & Comment
7

Jennifer Love Hewitt is an American actress, producer, author, television director and singer-songwriter. Hewitt began her acting career as a child by appearing in television commercials and the Disney Channel series Kids Incorporated. She rose to f... ame in teenage popular culture in her roles in the Fox series Party of Five as Sarah Reeves Merrin, and films I Know What You Did Last Summer and its 1998 sequel as Julie James.Hewitt starred on the hit CBS television program Ghost Whisperer as Melinda Gordon, for which she won a Saturn Award in 2007 and 2008 for Best Actress on Television. She starred in the Lifetime television series, The Client List, and was previously nominated for a Golden Globe Award for the pilot movie. In addition to acting, she has served as a producer on some of her film and television projects.As a singer, Hewitt has been signed by Atlantic Records and Jive Records, and is primarily known for her recordings in the pop genre. Her most successful single on the Billboard Hot 100 is the 1999 release "How Do I Deal", which peaked at No. 59. She has also contributed music to the promotion or soundtracks of acting projects   more
0 votes
0 comments
Jennifer Love Hewitt - Voter Comments
No Comments
Vote & Comment
No comments yet.
Leave a comment...
(Maximum 900 words)
Privacy Policy | Terms of Use
Sitemap | View Desktop Version
©2020 Debate.org. All rights reserved.