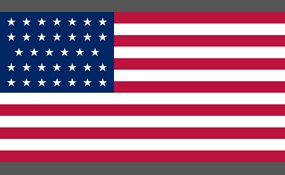 Which major american political party would you have supported in the mid 1800s?

Note that political parties and ideologies were much different at the time.

The Republican Party, commonly referred to as the GOP, is one of the two major contemporary political parties in the United States, the other being its historic rival the Democratic Party. Founded by anti-slavery activists in 1854, the GOP dominated...  politics nationally and in most of the North for most of the period from 1860 to 1932. There have been 18 Republican presidents, the first being Abraham Lincoln, who served from 1861 until his assassination in 1865, and the most recent being George W. Bush, who served two full four-year terms 2001 to 2009. The most recent Republican presidential nominee was former Massachusetts governor Mitt Romney who lost in 2012.The party's platform is generally based upon American conservatism, in contrast to the contemporary American liberalism of the rival Democratic Party. The Republican Party's conservatism involves supporting free market capitalism, opposing regulation and labor unions, and supporting socially conservative policies. The party is generally split on the issue of how to deal with illegal immigration   more
5 votes
0 comments
Republican Party - Voter Comments
No Comments
Vote & Comment
2

The Whig Party was a political party active in the middle of the 19th century in the United States of America. Four Presidents of the United States were members of the Whig Party. Considered integral to the Second Party System and operating from the...  early 1830s to the mid-1850s, the party was formed in opposition to the policies of President Andrew Jackson and his Democratic Party. In particular, the Whigs supported the supremacy of Congress over the Presidency and favored a program of modernization and economic protectionism. This name was chosen to echo the American Whigs of 1776, who fought for independence, and because "Whig" was then a widely recognized label of choice for people who identified as opposing tyranny. The Whig Party counted among its members such national political luminaries as Daniel Webster, William Henry Harrison, and their preeminent leader, Henry Clay of Kentucky. In addition to Harrison, the Whig Party also nominated war hero generals Zachary Taylor and Winfield Scott.In its two decades of existence, the Whig Party had two of its candidates, William Henry Harrison and Zachary Taylor, elected President. Both died in office   more
3 votes
1 comment
Whig Party - Voter Comments

The Democratic Party is one of the two major contemporary political parties in the United States, along with the younger Republican Party. Tracing its origins back to the Democratic-Republican Party, the modern Democratic Party was founded around 18... 28. There have been 15 Democratic presidents, the first being Andrew Jackson, who served from 1829 to 1837; the most recent is the current president, Barack Obama, who has served since 2009.Since the 1930s, the party has promoted a social-liberal platform, supporting a mixed economy and social justice. The party's philosophy of contemporary American liberalism advocates civil and political rights and liberties along with social justice. It pursues a mixed economy by providing government intervention and regulation in the economy. These interventions, such as universal health care, labor protection, social programs, equal opportunity, consumer protection, and environmental protection, form the party's economic policy basis. Until the late 20th century the party had a powerful conservative and populist wing based in the rural South, which over time has greatly diminished   more
2 votes
0 comments
Democratic Party - Voter Comments
No Comments
Vote & Comment
4

Southern Democrats are members of the U.S. Democratic Party who reside in the American South.In the 19th century, Southern Democrats comprised whites in the South who believed in Jacksonian democracy. In the 1850s they held that slavery was a good t... hing and promoted its expansion into the West. After Reconstruction ended in the late 1870s they controlled all the Southern states and disenfranchised the blacks. The "Solid South" gave nearly all its electoral votes to Democrats in presidential elections. Republicans seldom were elected to office outside some mountain districts.During the 1930s, as the New Deal began to move Democrats as a whole to the left in economic policy, Southern Democrats were mostly supportive, although by the late 1930s there was a growing conservative faction. Both factions supported Roosevelt's foreign policies. By 1948 the protection of segregation led Democrats in the Deep South to reject Truman and run a third party ticket of Dixiecrats in the 1948 election. After 1964, Southern Democrats lost major battles to the civil rights movement. Federal laws ended segregation and restrictions on black voters   more
0 votes
0 comments
Southern Democratic Party - Voter Comments
No Comments
Vote & Comment
Leave a comment...
(Maximum 900 words)

stargate says2015-09-18T20:42:52.8191086Z
Report Post
Um your are right, I did checked and the republicans back then where more liberal then they are now and it was the democrats who where the less liberal group.

triangle.128k says2015-09-18T20:45:59.3362954Z
Report Post
@stargate Well, one thing is that the Democrats back then usually favored farming, agriculture and they were very conservative in ways, they usually had support from people like farmers and all. Republicans supported a larger government and they favored business, industry, urbanization and etc, but to a lesser extent of the Whigs. Whigs were strictly in support of modernization and strict Capitalism, generally being hated by the south, their policies generally benefited the rich and business owners. Southern democrats were in support of f88kin' white supremacy and slavery.

triangle.128k says2015-09-18T20:48:55.5896155Z
Report Post
Some people insist Democrats back then were modern day Republicans and vice versa. But I wouldn't really suggest that, it would be pretty hard to plot a politician on the political scale back then. Ideologies were different, and there were different issues being faced over today.