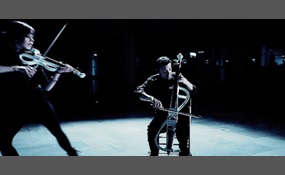 Which musical genius should run for president?

Why would we want politicians boring us to death when we can have music played to us instead.

The Piano Guys are an American musical group consisting of Jon Schmidt, Steven Sharp Nelson, Paul Anderson, and Al van der Beek. They gained popularity through YouTube, where they posted piano and cello renditions of popular songs and classical musi... c. Schmidt and Nelson's music is accompanied by professional-quality videos shot and edited by Paul Anderson and formerly by Tel Stewart. Their first four major-label albums The Piano Guys, The Piano Guys 2, A Family Christmas, and Wonders each reached number one on the Billboard New Age Albums and Classical Albums charts. The Piano Guys' newest album Wonders was released on October 7, 2014   more
8 votes
1 comment
The Piano Guys - Voter Comments

Jonathan Smith, better known by his stage name Lil Jon, is an American rapper, record producer, entrepreneur, and international DJ who was a member of the group Lil Jon & The East Side Boyz. Lil Jon formed the group in 1997, and the group released s... everal albums between then and 2004. He then went solo and released a new album in 2010 titled Crunk Rock. He was also featured on Celebrity Apprentice during its 11th and 13th seasons   more
7 votes
0 comments
Lil Jon - Voter Comments
No Comments
Vote & Comment
3

Lindsey Stirling is an American violinist, dancer, performance artist, and composer. She presents choreographed violin performances, both live and in music videos found on her YouTube channel, Lindseystomp, which she introduced in 2007. In 2010, Sti... rling was a quarter-finalist on America's Got Talent season five.Since 2010, Stirling has released two studio albums, an EP, and several singles. Her debut eponymous album was a commercial success in Europe, selling 200,000 copies in Germany, winning a platinum certification. Three other certifications were given to her by Austria, Switzerland and Poland. Her debut album was nominated for the 2014 Billboard Music Awards in the section of "Top Dance/Electronic Albums".She performs a variety of music styles, from classical to pop and hip-hop to electronic dance music. Aside from original work, her discography contains covers of songs by other musicians and various soundtracks. Stirling is also a YouTube sensation: her music video "Crystallize" finished as the eighth-most watched video of 2012, and her cover version of "Radioactive" with Pentatonix won Response of the Year in the first YouTube Music Awards in 2013   more
3 votes
0 comments
Lindsey Stirling - Voter Comments
No Comments
Vote & Comment
Leave a comment...
(Maximum 900 words)