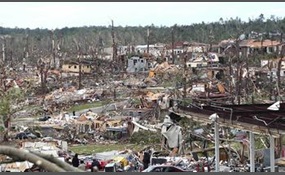 Which natural disaster do you fear least?

Which natural disaster do you fear least? I am giving you the liberty of adding answers, so please be practical and responsible with that privilege.

Lightning is a powerful sudden flow of electricity accompanied by thunder that occurs during an electric storm. The discharge will travel between the electrically charged regions within a thundercloud, or between a cloud and a cloud, or between a cl... oud and the surface of a planet. The charged regions within the atmosphere temporarily equalize themselves through a lightning flash, commonly referred to as a strike if it hits an object on the ground. There are three primary types of lightning; from a cloud to itself; from one cloud to another cloud and between a cloud and the ground. Although lightning is always accompanied by the sound of thunder, distant lightning may be seen but may be too far away for the thunder to be heard   more
9 votes
4 comments
Lightning - Voter Comments

Donderpants says2015-08-03T04:29:46.5024626Z
Report Post
You can probably survive that, and your house and the rest of your family should be safe. The same can not be said for many of the other options. I almost chose earthquake, as in NZ we have those pretty frequently, but all the ones I've experienced are pretty weak, so just any old earthquake I'm even more likely to survive than a lightning strike. However, I assume you meant a serious one, so lightning strike it is.

A pandemic is an epidemic of infectious disease that has spread through human populations across a large region; for instance multiple continents, or even worldwide. A widespread endemic disease that is stable in terms of how many people are getting...  sick from it is not a pandemic. Further, flu pandemics generally exclude recurrences of seasonal flu. Throughout history there have been a number of pandemics, such as smallpox and tuberculosis. More recent pandemics include the HIV pandemic as well as the 1918 and 2009 H1N1 pandemics   more
0 votes
0 comments
Pandemic - Voter Comments
No Comments
Vote & Comment
8