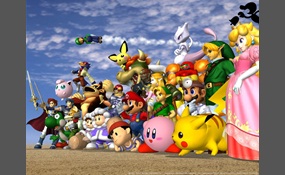 Kirby is a fictional character and the protagonist of the Kirby series of video games owned by Nintendo. As one of Nintendo's most famous and familiar icons, Kirby's round, pink appearance and ability to copy his foe's powers to use as his own has m... ade him a well known figure in video games, consistently ranked as one of the most iconic video game characters. He made his first appearance in 1992 in Kirby's Dream Land for the Game Boy. Originally a placeholder, created by Masahiro Sakurai, for the game's early development, he has since then starred in over 20 games, ranging from action platformers to pinball, puzzle and racing games, and has been featured as a playable fighter in all Super Smash Bros. Games. He has also starred in his own anime and manga series. His most recent appearance is in Super Smash Bros. For Nintendo 3DS and Wii U, released in 2014 for the Nintendo 3DS and Wii U. Since 1999, he has been voiced by Makiko Ohmoto.Kirby is famous for his ability to inhale objects and creatures to obtain their attributes, as well as his ability to float with puffed cheeks   more
7 votes
0 comments
Kirby - Voter Comments
No Comments
Vote & Comment
2

Luigi is a fictional character featured in video games and related media released by Nintendo. Created by prominent game designer Shigeru Miyamoto, Luigi is portrayed as the slightly younger but taller fraternal twin brother of Nintendo's mascot Mar... io, and appears in many games throughout the Mario franchise, frequently as a sidekick to his brother.Luigi first appeared in the 1983 arcade game Mario Bros. As the character controlled by the second player, and retained this role in Super Mario Bros., Super Mario Bros. 3, Super Mario World, and other titles. The first game where he was available as a primary character was Super Mario Bros. 2. In more recent appearances, Luigi's role became increasingly restricted to spinoffs such as the Mario Party and Mario Kart series, though he has been featured in a starring role on three occasions: first in the 1991 educational game Mario Is Missing!, in Luigi's Mansion for the Nintendo GameCube in 2001, and in Luigi's Mansion: Dark Moon for the 3DS. In all three of these games, he is called upon to act as the hero because Mario, the usual hero within the franchise, is in need of rescue   more
5 votes
1 comment
Luigi - Voter Comments

Link refers to several different incarnations of the same fictional character and the protagonist of Nintendo's The Legend of Zelda series. Link has been featured in other media from Nintendo, including its merchandising, comic books, and a cartoon ... series.Link is depicted as a child, teenager, or adult of the Hylian race, originating from the fictional land of Hyrule. Link often travels through Hyrule, defeating creatures, evil forces, and the series' primary antagonist, Ganon, while attempting to save Princess Zelda and Hyrule. To defeat him, Link usually requires the mystic Master Sword and Light Arrows, or a similar legendary weapon, obtained after many trials and battles, and magical objects or using other items such as musical instruments and weaponry   more
4 votes
0 comments
Link - Voter Comments
No Comments
Vote & Comment
4

Squirtle, is a Pokémon species in Nintendo and Game Freak's Pokémon franchise. It was originally conceived by Game Freak's character development team and finalized by Ken Sugimori. Its name was changed from Zenigame to Squirtle during the English lo... calization of the series in order to give it a "clever and descriptive name." In animated appearances, Squirtle is voiced in Japanese by Rikako Aikawa and in English localizations by Eric Stuart. Squirtle, in the anime, never evolved for reasons never truly explained by the creators   more
4 votes
1 comment
Squirtle - Voter Comments

Yoshi or, once romanized as Yossy, full name T. Yoshisaur Munchakoopas, Plural: Yoshis, is a fictional anthropomorphic dinosaur who appears in video games published by Nintendo. He debuted in Super Mario World on the Super Nintendo Entertainment Sys... tem as Mario and Luigi's sidekick, and he later established his own series with several platform and puzzle games, including Super Mario World 2: Yoshi's Island. He has also appeared in many of the spin-off Mario games including the Mario Party, the Mario Kart, and the Super Smash Bros. Series, as well as in other various Mario sports titles. Yoshi also appears in New Super Mario Bros. Wii as the characters' companion and steed, similar to his original debut role in Super Mario World. Yoshi belongs to the species of the same name which comes in various colors, with green being the most common   more
3 votes
0 comments
Yoshi - Voter Comments
No Comments
Vote & Comment
6

Toad, known in Japan as Kinopio, is a fictional character who primarily appears in Nintendo's Mario franchise. Created by Japanese video game designer Shigeru Miyamoto, he is portrayed as a citizen of the Mushroom Kingdom and is one of Princess Peac... h's most loyal attendants; constantly working on her behalf. He is usually seen as a non-player character who provides assistance to Mario and his friends in most games, but there are times when Toad takes center stage and appears as the protagonist, as seen in Super Mario Bros. 2, Wario's Woods, Super Mario 3D World, and Captain Toad: Treasure Tracker.While Toad is the name of an individual, it also refers to an entire species. However, in Japan, the species name is sometimes called Kinoko-zoku, literally "Mushroom People". In other words, Toad is a member of the Toads. In Mario franchise, there are also some other individual toad characters. The common point of most toads is their traditionally large mushroom cap and vest   more
2 votes
0 comments
Toad - Voter Comments
No Comments
Vote & Comment
7

Goombas, known in Japan as Kuribo, are a species of sentient mushrooms from Nintendo's Mario franchise. They first appeared in the NES video game Super Mario Bros. As the first enemy players encounter. They have appeared outside of video games, incl... uding in film, television, and other media. They are usually brown and are most commonly seen walking around aimlessly, often as an obstacle, in video games. They were included late in the development of Super Mario Bros. In order to create a simple, easy-to-defeat enemy.The species is considered one of the most iconic elements of the Mario series, appearing in nearly every game in the series, and is often ranked amongst the most famous enemies in video games. Crave Online described it as the series' "everyman". It has been compared to other generic enemies in video games, such as the "Met" enemy from the Mega Man series. The video game incarnation has been made into several plush toys   more
2 votes
0 comments
Goomba - Voter Comments
No Comments
Vote & Comment
8

Waluigi is a fictional character in the Mario franchise. He plays the role of Luigi's rival and nemesis and accompanies Wario in spin-offs from the main Mario series, often for the sake of causing mischief. He was created by Camelot employee Fumihid... e Aoki and is voiced by Charles Martinet, who described Waluigi as someone who has a lot of self-pity and would "cheat to win."Waluigi debuted in the game Mario Tennis as Luigi's rival and Wario's partner. Since then, he would remain a playable character in the main Mario series spin-offs, occasionally causing comedic mischief alongside Wario or antagonizing the rest of the characters, primarily Mario and Luigi. Since his debut, Waluigi has received mixed reception from fans and critics alike   more
1 vote
1 comment
Waluigi - Voter Comments

Bowser, is a video game character and the main antagonist of Nintendo's Mario franchise. In Japan, the character bears the title of Daimaō. In the United States, the character was first referred to as "Bowser, King of the Koopa" and "The sorcerer ki... ng" in the Super Mario Bros. Instruction manual. Bowser is the leader and most powerful of the turtle-like Koopa race, and has been the greedy nemesis of Mario ever since his first appearance, in the game Super Mario Bros.His ultimate goals are to marry Princess Peach, defeat Mario, and conquer the Mushroom Kingdom. Since his debut, he has appeared in almost every Mario franchise game, usually serving as the main antagonist. Bowser has been called "the most successful video game character". Currently, Bowser is voiced by Kenny James   more
1 vote
0 comments
King Koopa - Voter Comments
No Comments
Vote & Comment
11

Mario is a fictional character in the Mario video game franchise, created by Nintendo's Japanese video game designer, Shigeru Miyamoto. Serving as the company's mascot and the eponymous protagonist of the series, Mario has appeared in over 200 video...  games since his creation. Depicted as a short, pudgy, Italian plumber who resides in the Mushroom Kingdom, his adventures generally center upon rescuing Princess Peach from the Koopa villain Bowser. His younger brother is Luigi.The Mario franchise is the best-selling video game franchise of all time. Over 210 million units of the overall Mario series of games have been sold. Outside of the Super Mario platform series, other Mario genres include the Mario Kart racing series, sports games such as the Mario Tennis and Mario Golf series, role-playing games such as Super Mario RPG and Paper Mario, and educational games such as Mario Is Missing! And Mario's Time Machine. The franchise has branched into several mediums, including television shows, film, comics and a line of licensed merchandise. Since 1995, Mario has been voiced by Charles Martinet   more
0 votes
0 comments
Mario - Voter Comments
No Comments
Vote & Comment
12

Donkey Kong is an anthropomorphic mountain gorilla appearing in the Donkey Kong and Mario video game franchises. A popular character, he has appeared in many video games. Donkey Kong was Jumpman's first opponent in Nintendo's popular 1981 arcade gam... e, Donkey Kong. Since then he has starred in his own series of games, starting with 1994's Donkey Kong Country for the Super Nintendo Entertainment System, and remains an important character in the spin-off games of the Mario series.DK debuted at the same time as Mario, and he still appears with Mario on occasion, appearing as a playable character in the Mario Kart and Super Smash Bros. Series, and is the primary antagonist in the Mario vs. Donkey Kong games   more
0 votes
0 comments
Donkey Kong - Voter Comments
No Comments
Vote & Comment
14

Princess Peach is a character in Nintendo's Mario franchise. Originally created by Shigeru Miyamoto, Peach is the princess of the fictional Mushroom Kingdom, which is constantly under attack by Bowser. She often plays the damsel in distress role wit... hin the series and is the lead female. She is often portrayed as Mario's love interest and has appeared in nearly all the Mario games to date; with the most notable being in Super Princess Peach where she is the main playable character   more
0 votes
0 comments
Princess Peach - Voter Comments
No Comments
Vote & Comment
15

Wario is a fictional character in Nintendo's Mario series who was designed as an antagonist to Mario. He first appeared in the 1992 Game Boy title Super Mario Land 2: 6 Golden Coins as the main antagonist and final boss. He was portrayed as an exagg... erated version of Mario and his name is a variant of "Mario". Wario was first designed by Hiroji Kiyotake, and is voiced by Charles Martinet, who also voices many other characters in the series.Since his debut, Wario has become the protagonist and antihero of the Wario Land and WarioWare series, spanning handheld and console markets. In addition to appearances in spin-offs in the Mario series, he appears in cameos for Kirby Super Star Ultra, Densetsu no Stafy 3 and Pilotwings 64. He has also been featured in other media such as the Super Mario Adventures graphic novel. The character has received a largely positive critical reception and has emerged as a well-established mascot for Nintendo   more
0 votes
0 comments
Wario - Voter Comments
No Comments
Vote & Comment
Leave a comment...
(Maximum 900 words)