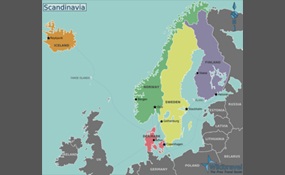 Which Nordic Country do you mostly associate the vikings with?

Denmark, is a Nordic country in Northern Europe, located southwest of Sweden and south of Norway, and bordered to the south by Germany. The Kingdom of Denmark comprises Denmark and two autonomous constituent countries in the North Atlantic Ocean, th... e Faroe Islands and Greenland. Denmark proper has an area of 43,094 square kilometres, and a population of around 5.65 million inhabitants. The country consists of a peninsula, Jutland, and the Danish archipelago of 443 named islands, of which around 70 are inhabited. The islands are characterised by flat, arable land and sandy coasts, low elevation and a temperate climate.A Scandinavian nation, Denmark shares strong cultural and historic ties with its overseas neighbours Sweden and Norway. The national language, Danish, is very closely related and mutually intelligible with Swedish and Norwegian.The unified kingdom of Denmark emerged in the 10th century as a proficient seafaring nation in the struggle for control of the Baltic Sea. Danish rule over the personal Kalmar Union, established in 1397, ended with Swedish secession in 1523. The following year, Denmark entered into a union with Norway until its dissolution in 1814   more
6 votes
1 comment
Denmark - Voter Comments

Norway, officially the Kingdom of Norway, is a sovereign and unitary monarchy whose territory comprises the western portion of the Scandinavian Peninsula, Jan Mayen, and the Arctic archipelago of Svalbard. The Antarctic Peter I Island and the sub-An... tarctic Bouvet Island are dependent territories and thus not considered part of the Kingdom. Norway also lays claim to a section of Antarctica known as Queen Maud Land. Until 1814, the Kingdom included the Faroe Islands, Greenland, and Iceland.Norway has a total area of 385,252 square kilometres and a population of 5,109,059 people. The country shares a long eastern border with Sweden. Norway is bordered by Finland and Russia to the north-east, and the Skagerrak Strait to the south, with Denmark on the other side. Norway has an extensive coastline, facing the North Atlantic Ocean and the Barents Sea.King Harald V of the House of Schleswig-Holstein-Sonderburg-Glücksburg is the current monarch of Norway. Erna Solberg became Prime Minister in 2013, replacing Jens Stoltenberg. A constitutional monarchy since 1814, state power is divided between the Parliament, the King and his Council, and the Supreme Court   more
5 votes
2 comments
Norway - Voter Comments

You associate all of Scandinavia with The Vikings, not just one specific country.
1 vote
0 comments
All of them. - Voter Comments
No Comments
Vote & Comment
4

Sweden, officially the Kingdom of Sweden, is a Scandinavian country in Northern Europe. Sweden borders Norway and Finland, and is connected to Denmark by a bridge-tunnel across the Øresund. At 450,295 square kilometres, Sweden is the third-largest c... ountry in the European Union by area, with a total population of about 9.7 million. Sweden has a low population density of 21 inhabitants per square kilometre, with the population mostly concentrated in the southern half of the country. About 85% of the population lives in urban areas. Southern Sweden is predominantly agricultural, while the north is heavily forested.Germanic peoples have inhabited Sweden since prehistoric times, emerging into history as the Goths/Geats and Swedes/Svear and contributing to the sea peoples known as the Vikings. Sweden emerged as an independent and unified country during the Middle Ages. In the 17th century, the country expanded its territories to form the Swedish Empire. The empire grew to be one of the great powers of Europe in the 17th and early 18th centuries. Most of the conquered territories outside the Scandinavian Peninsula were lost during the 18th and 19th centuries   more
1 vote
0 comments
Sweden - Voter Comments
No Comments
Vote & Comment
5

Iceland is a Nordic country between the North Atlantic and the Arctic Ocean. It has a population of 325,671 and an area of 103,000 km², making it the most sparsely populated country in Europe. The capital and largest city is Reykjavík; the surroundi... ng areas in the southwest of the country are home to two-thirds of the population. Iceland is volcanically and geologically active. The interior consists mainly of a plateau characterised by sand and lava fields, mountains and glaciers, while many glacial rivers flow to the sea through the lowlands. Iceland is warmed by the Gulf Stream and has a temperate climate despite a high latitude just outside the Arctic Circle.According to Landnámabók, the settlement of Iceland began in AD 874 when the Norwegian chieftain Ingólfr Arnarson became the first permanent settler on the island. In the following centuries, Scandinavians settled Iceland, bringing with them thralls of Gaelic origin. From 1262 to 1918, Iceland was ruled by Norway and later Denmark. The country became independent in 1918 and a republic in 1944.Until the 20th century, Iceland relied largely on fishing and agriculture   more
0 votes
0 comments
Iceland - Voter Comments
No Comments
Vote & Comment
7

Finland, officially the Republic of Finland, is a Nordic country in Northern Europe bordered by Sweden to the west, Norway to the north and Russia to the east; Estonia lies to the south across the Gulf of Finland.In 2013, Finland's population was ar... ound 5.5 million, with the majority living in its southern regions. In terms of area, it is the eighth largest country in Europe and the most sparsely populated country in the European Union. Finland is a parliamentary republic with a central government based in the capital Helsinki, local governments in 336 municipalities and an autonomous region, the Åland Islands. About one million people live in the Helsinki area which produces a third of the country's GDP. Other large cities include Tampere, Turku, Oulu, Jyväskylä, Lahti, and Kuopio.From the late 12th century until 1809, Finland was part of Sweden, a legacy reflected in the prevalence of the Swedish language and its official status. It then became the Grand Duchy of Finland, an autonomous duchy within the Russian Empire, until the Russian Revolution which prompted the Finnish Declaration of Independence   more
0 votes
0 comments
Finland - Voter Comments
No Comments
Vote & Comment
Leave a comment...
(Maximum 900 words)