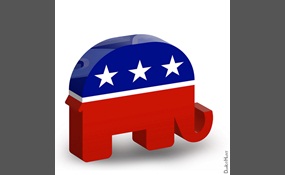 Which of the 5 republican candidates should win the republican nomination?

Randal Howard "Rand" Paul is an American politician and a former ophthalmologist who serves as the junior United States Senator for Kentucky, in office since 2011. He is a member of the Republican Party and the son of former U.S. Representative and ... presidential candidate Ron Paul of Texas.A graduate of the Duke University School of Medicine, Paul began practicing ophthalmology in Bowling Green, Kentucky in 1993 and established his own clinic in December 2007. He became active in politics and founded Kentucky Taxpayers United in 1994, of which he is still chairman. He first received national attention in 2008 when making political speeches on behalf of his father, who was campaigning for the Republican Party's nomination for president. In 2010, Paul ran for the U.S. Senate seat being vacated by retiring Senator Jim Bunning of Kentucky, defeating Kentucky Secretary of State Trey Grayson in the Republican primary. He subsequently defeated the Democratic nominee, Kentucky Attorney General Jack Conway, in the general election   more
11 votes
5 comments
Rand Paul - Voter Comments

Rafael Edward "Ted" Cruz is the junior United States Senator from Texas. Elected in 2012, he is the first Cuban American or Latino to hold the office of US Senator from Texas. Cruz is a member of the Republican Party. He served as Solicitor General ... of Texas from 2003 to May 2008, after being appointed by Texas Attorney General Greg Abbott. Between 1999 and 2003, Cruz served as the director of the Office of Policy Planning at the Federal Trade Commission, an Associate Deputy Attorney General at the United States Department of Justice, and as Domestic Policy Advisor to U.S. President George W. Bush on the 2000 Bush-Cheney campaign. Cruz was also an Adjunct Professor of Law at the University of Texas School of Law in Austin, where he taught U.S. Supreme Court litigation, from 2004 to 2009.Cruz was the Republican nominee for the Senate seat vacated by fellow Republican Kay Bailey Hutchison. On July 31, 2012, he defeated Lieutenant Governor David Dewhurst in the Republican primary runoff, 57–43. Cruz defeated the Democrat, former state Representative Paul Sadler, in the general election held on November 6, 2012; he prevailed with 56–41 over Sadler   more
1 vote
0 comments
Ted Cruz - Voter Comments
No Comments
Vote & Comment
3

Benjamin S. Carson, Sr., M.D. Has been a director of the Company since May 1999. He is the Director of Pediatric Neurosurgery at Johns Hopkins University. Dr. Carson is also a director of Kellogg Company.
1 vote
1 comment
Ben Carson - Voter Comments

Carly Fiorina is an American former business executive and was the Republican nominee for the United States Senate from California in 2010. Fiorina served as chief executive officer of Hewlett-Packard from 1999 to 2005 and previously was an executiv... e at AT&T and its equipment and technology spinoff, Lucent.Fiorina was considered one of the most powerful women in business during her tenure at Lucent and Hewlett-Packard. While she was chief executive at HP, the company weathered the collapse of the dot-com bubble, although the stock lost half of its value throughout her tenure. In 2002, the company completed a contentious merger with rival computer company Compaq, which made HP the world's largest personal computer manufacturer. In 2005, Fiorina was forced to resign as chief executive officer and chairman of HP following "differences [with the board of directors] about how to execute HP's strategy."Fiorina served as an advisor to Republican John McCain's 2008 presidential campaign. She was the Republican nominee for the United States Senate from California in 2010, losing to incumbent Democratic Senator Barbara Boxer. She is actively considering running for President in 2016   more
0 votes
0 comments
Carly Fiorina - Voter Comments
No Comments
Vote & Comment
5

Marco Antonio Rubio is the junior United States Senator from Florida, serving since January 2011. A member of the Republican Party, he previously served as Speaker of the Florida House of Representatives.A Cuban American native of Miami, Florida, Ru... bio is a graduate of the University of Florida and the University of Miami Law School. In the late 1990s, he served as a City Commissioner for West Miami and was elected to the Florida House of Representatives in 2000, representing the 111th House district. He was elected Speaker in November 2006.Rubio announced a run for U.S. Senate in May 2009 after incumbent Republican Mel Martinez resigned. Initially trailing by double-digits against the incumbent Republican Governor Charlie Crist, Rubio eventually surpassed him in polling for the Republican nomination. Rubio won the Republican nomination after Crist opted instead to run with no party affiliation. In a three-way split against Crist and Democratic candidate Kendrick Meek, Rubio won the general election in November 2010 with 48.9 percent of the vote. He is one of three Latinos in the Senate   more
0 votes
0 comments
Marco Rubio - Voter Comments
No Comments
Vote & Comment
Leave a comment...
(Maximum 900 words)