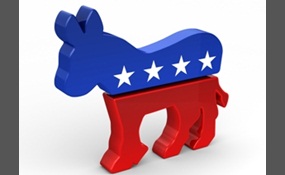 Which of these 3 Democrats would you like to see run for President?

There is quite a shortage of Dem candidates for this election, which of these 3 would you like to see declare?

Joseph Robinette "Joe" Biden, Jr. Is the 47th and current Vice President of the United States, jointly elected with President Barack Obama. He is a member of the Democratic Party and was a United States Senator from Delaware from January 3, 1973, un... til his resignation on January 15, 2009, following his election to the Vice Presidency. In 2012, Biden was elected to a second term alongside Obama.Biden was born in Scranton, Pennsylvania, and lived there for ten years before moving to Delaware. He became an attorney in 1969, and was elected to the New Castle County council in 1970. Biden was first elected to the Senate in 1972 and became the sixth-youngest senator in U.S. history. He was re-elected to the Senate six times, and was the fourth most senior senator at the time of his resignation. Biden was a long-time member and former chairman of the Foreign Relations Committee. His strong advocacy helped bring about U.S. military assistance and intervention during the Bosnian War. He opposed the Gulf War in 1991. He voted in favor of the Iraq War Resolution in 2002, but later proposed resolutions to alter U.S. strategy there   more
7 votes
2 comments
Joe Biden - Voter Comments

Nancy Patricia D'Alesandro Pelosi is the Minority Leader of the United States House of Representatives and served as the 60th Speaker of the United States House of Representatives from 2007 to 2011. She is the only woman to have served as the House ... Speaker and to date is the highest-ranking female politician in American history.A member of the Democratic Party, Pelosi represents California's 12th congressional district, which consists of four-fifths of the city and county of San Francisco. The district was numbered as the 5th during Pelosi's first three terms in the House, and as the 8th from 1993 to 2013. She served as the House Minority Whip from 2002 to 2003, and was House Minority Leader from 2003 to 2007, holding the post during the 108th and 109th Congresses. Pelosi is the first woman, the first Californian and first Italian-American to lead a major party in Congress. After the Democrats took control of the House in 2007 and increased their majority in 2009, Pelosi was elected Speaker of the House for the 110th and 111th Congresses   more
1 vote
0 comments
Nancy Pelosi - Voter Comments
No Comments
Vote & Comment
3

Harry Mason Reid is an American politician and the senior United States Senator from Nevada, in office since 1987. A member of the Democratic Party, he has served as the Senate Majority Leader since January 2007, having previously served as Minority...  Leader and Minority and Majority Whip.Previously, Reid was a member of the U.S. House of Representatives, representing Nevada's 1st congressional district, and served in Nevada local and state government as city attorney of Henderson, a state legislator, the 25th Lieutenant Governor, and chairman of the Nevada Gaming Commission.As Senate Majority Leader and a member of The Church of Jesus Christ of Latter-day Saints, Reid has attained higher elected political office in United States government than any other U.S. Latter-day Saint politician to date. Should he complete his full term in the 113th United States Congress, he will be one of only three Senators to serve at least eight years as Majority Leader, along with Alben W. Barkley and Mike Mansfield. Reid's current term ends in January 2017, and he has stated that he intends to seek re-election in 2016   more
0 votes
0 comments
Harry Reid - Voter Comments
No Comments
Vote & Comment
Leave a comment...
(Maximum 900 words)