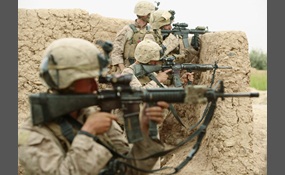 Which of these countries is the most agressive?

If u want a specific country please ask and i will put it in.

The United States of America, commonly referred to as the United States, America, and sometimes the States, is a federal republic consisting of 50 states and a federal district. The 48 contiguous states and Washington, D.C., are in central North Ame... rica between Canada and Mexico. The state of Alaska is the northwestern part of North America and the state of Hawaii is an archipelago in the mid-Pacific. The country also has five populated and nine unpopulated territories in the Pacific and the Caribbean. At 3.80 million square miles and with around 318 million people, the United States is the world's third- or fourth-largest country by total area and third-largest by population. It is one of the world's most ethnically diverse and multicultural nations, the product of large-scale immigration from many countries. The geography and climate of the United States is also extremely diverse, and it is home to a wide variety of wildlife.Paleo-Indians migrated from Eurasia to what is now the U.S. mainland around 15,000 years ago, with European colonization beginning in the 16th century. The United States emerged from 13 British colonies located along the Atlantic seaboard   more
8 votes
1 comment
United States of America - Voter Comments

The Palestine Liberation Organization is an organization founded in 1964 with the purpose of the liberation of Palestine through diplomacy and armed struggle. It is recognized as the "sole legitimate representative of the Palestinian people" by over...  100 states with which it holds diplomatic relations, and has enjoyed observer status at the United Nations since 1974. The PLO was considered by the United States and Israel to be a terrorist organization until the Madrid Conference in 1991. In 1993, the PLO recognized Israel's right to exist in peace, accepted UN Security Council resolutions 242 and 338, and rejected "violence and terrorism"; in response, Israel officially recognized the PLO as the representative of the Palestinian people   more
1 vote
0 comments
Palestine Liberation Organization - Voter Comments
No Comments
Vote & Comment
6

The United Kingdom of Great Britain and Northern Ireland, commonly known as the United Kingdom or Britain, is a sovereign state in Europe. Lying off the north-western coast of the European mainland, the country includes the island of Great Britain, ... the north-eastern part of the island of Ireland, and many smaller islands. Northern Ireland is the only part of the UK that shares a land border with another state: the Republic of Ireland. Apart from this land border, the UK is surrounded by the Atlantic Ocean, with the North Sea in the east and the English Channel in the south. The Irish Sea lies between Great Britain and Ireland. The UK has an area of 243,610 square kilometres, making it the 78th-largest sovereign state in the world and the 11th-largest in Europe.The United Kingdom is the 22nd-most populous country, with an estimated 64.1 million inhabitants. It is a constitutional monarchy with a parliamentary system of governance. Its capital city is London, an important global city and financial centre with the second-largest urban area in Europe, and its metropolitan area is the largest in European Union, with a population of about 14 million according Eurostat   more
0 votes
0 comments
United Kingdom - Voter Comments
No Comments
Vote & Comment
7

biggest_pro_going says2015-04-11T08:50:57.2894543-05:00
Report Post
Also Russia are not trying to take over Ukraine why would u even say that? What has Russia done. Has it invaded? No. Currently the US is bombing Syria in the last 15 years it has bombed Libya, Invaded Iraq, Invaded Afghanistan, started a Kou in Ukraine, Funded countless rebels and sanctions a lot of countries to show its apparent global dominance.

58539672 says2015-04-11T22:10:31.2118338-05:00
Report Post
Russia is not trying to take over Ukraine, just establish a buffer zone on Ukrainian territory. They do that by supplying rebels along their boarders to establish semi-autonomis states that are under the control (directly or indirectly) of the Kremlin. This is also called a proxy war and is used heavily by the US and Russia to fight each other. Russia has in the past 20 years funded more of these conflicts than the US, so I think that makes them the more aggressive. Some of Russia's more resent ones include Ukraine, Georgia , Armenia, Azerbaijan, and Syria.

biggest_pro_going says2015-04-12T05:27:46.6179148-05:00
Report Post
These conflicts you talk of is Russia FUNDING groups in actually invading/bombing countries. In Georgia the Georgian army started attacking its own people because they did not like the government and ... LIKE RUSSIA ( some Americans cant except that) Russia was just helping. All These countries ether border or have a long history with it/were once ruled by it/the people there like Russia there. BUT America INVADES not funds countries for no reason at all. ALL THE TIME and it is sanctioning like 6 countries. And its news tries to make you think another 20 are evil. That's quite an aggressive place. ****Pro Russian Ukrainian Freedom fighters shoot down a Malaysian air liner***** and America blame Russia!! Is that not just PURE American propaganda?