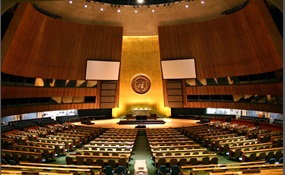 Which of these four principles of international law is the most important?

Of the four principles stated here, which one do you think that should be defended by the international community in cases in which two or more of them are conflicting?

The idea that every human being have some fundamental rights that should be defended independently of the political or social organization of their communities.
13 votes
1 comment
Human Rights - Voter Comments

State sovereignty is based on the idea that countries should be free to deal with their internal issues the way they think its best, without any type of uncalled interventions (economical, political, or military) between nations, and that maintainin... g the territorial integrity and union of a nation is one of the most basic principles of international law   more
3 votes
1 comment
State sovereignity - Voter Comments

Self-determination is the idea that every community has the right to decide how they want to organize their own political and social lives, even if in order to achieve it, they must oppose the authority that rules over them.
2 votes
1 comment
National self-determination - Voter Comments

Formerland1 says2014-06-30T00:28:35.0648832-05:00
Report Post
If we organized into locations with roughly equal resorce distribution and those areas were based on political ideology everyone would be happy because the people they don't like wouldnt be near them .
Vote & Comment
4

The idea that forms of governments similar to a democracy should be defended and/or promoted around the world, since the best form of organizing a government is through a system under the authority of a constitution that restricts the powers of lead... ers, based on the idea that such leaders are mere representatives of their communities and should be accountable to it. This is based on the idea that democracies don't fight each other, and therefore, it's promotion is a way to achieve world peace   more
0 votes
0 comments
Democracy/Constitutional governance - Voter Comments
No Comments
Vote & Comment
Leave a comment...
(Maximum 900 words)

ChosenWolff says2014-06-30T02:22:14.1025850-05:00
Report Post
Democracy isn't a principle of international law, although 'm considering voting for that. A true democracy, isn't representative like Switzerland and Taiwan. Raw vote by the people can never fail.

ChosenWolff says2014-06-30T02:24:53.6118197-05:00
Report Post
Joepbr is right. In not so rare cases, the people can have a democratic vote to harm a certain minority. Or in America's complex representative system of electoral college and redistricting, we allow the minority (conservatives) to abuse the majority (liberals, homosexual, Mexican, and African voting bloc.) Democracy done right can't fail. So many states treat it like a bureaucracy though.

joepbr says2014-07-01T12:26:35.0018473-05:00
Report Post
@ChosenWolff democracy isn't an explicit principle of international law, but several scholars consider it an "implicit" one, claiming that international law can only be effective with democracies.