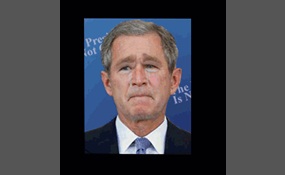 Which of These is the worst Leader of a country

Barack Hussein Obama II (/bəˈrɑːk huːˈseɪn oʊˈbɑːmə/; born August 4, 1961) is the 44th and current President of the United States. He is the first African American to hold the office. Obama served as a U.S. Senator representing the state of Illinois...  from January 2005 to November 2008, when he resigned following his victory in the 2008 presidential election.Born in Honolulu, Hawaii, Obama is a graduate of Columbia University and Harvard Law School, where he was the president of the Harvard Law Review. He was a community organizer in Chicago before earning his law degree. He worked as a civil rights attorney in Chicago and taught constitutional law at the University of Chicago Law School from 1992 to 2004. He served three terms representing the 13th District in the Illinois Senate from 1997 to 2004   more
13 votes
3 comments
Barack Obama - Voter Comments

restore_america_now says2014-08-03T12:05:08.5502274-05:00
Report Post
At least the other leaders on this page leave no doubt who they were or are where Mr. Obama is inherently either evil or ignorant or a combination of both, to do what he's done to this country while blaming everyone else.

Kim Jong-un is the supreme leader of the Democratic People's Republic of Korea, commonly known as North Korea. He is the son of Kim Jong-il and the grandson of Kim Il-sung. He has held the titles of the First Secretary of the Workers' Party of Korea... , the Chairman of the Central Military Commission, First Chairman of the National Defence Commission of North Korea, the Supreme Commander of the Korean People's Army, and presidium member of the Politburo of the Workers' Party of Korea. He was officially declared the supreme leader following the state funeral for his father on 28 December 2011. He is the third and youngest son of Kim Jong-il and his consort Ko Young-hee.From late 2010, Kim Jong-un was viewed as heir apparent to the leadership of the nation, and following his father's death, he was announced as the "Great Successor" by North Korean state television. At Kim Jong-il's memorial service, North Korean Chairman of the Supreme People's Assembly Kim Yong-nam declared that "Respected Comrade Kim Jong-un is our party, military and country's supreme leader who inherits great comrade Kim Jong-il's ideology, leadership, character, virtues, grit and courage"   more
9 votes
2 comments
Kim Jong-un - Voter Comments

Joseph Stalin or Iosif Vissarionovich Stalin, was the leader of the Soviet Union from the mid-1920s until his death in 1953.Among the Bolshevik revolutionaries who took part in the Russian Revolution of 1917, Stalin was appointed general secretary o... f the party's Central Committee in 1922. He subsequently managed to consolidate power following the 1924 death of Vladimir Lenin through suppressing Lenin's criticisms and expanding the functions of his role, all the while eliminating any opposition. By the late 1920s, he was the unchallenged leader of the Soviet Union. He remained general secretary until the post was abolished in 1952, concurrently serving as the Premier of the Soviet Union from 1941 onward.Under Stalin's rule, the concept of "socialism in one country" became a central tenet of Soviet society. He replaced the New Economic Policy introduced by Lenin in the early 1920s with a highly centralised command economy, launching a period of industrialization and collectivization that resulted in the rapid transformation of the USSR from an agrarian society into an industrial power   more
4 votes
0 comments
Joseph Stalin - Voter Comments
No Comments
Vote & Comment
4

George Walker Bush is an American politician and businessman who served as the 43rd President of the United States from 2001 to 2009, and the 46th Governor of Texas from 1995 to 2000. The eldest son of Barbara and George H. W. Bush, he was born in N... ew Haven, Connecticut. After graduating from Yale University in 1968 and Harvard Business School in 1975, Bush worked in oil businesses. He married Laura Welch in 1977 and ran unsuccessfully for the House of Representatives shortly thereafter. He later co-owned the Texas Rangers baseball team before defeating Ann Richards in the 1994 Texas gubernatorial election. Bush was elected president in 2000 after a close and controversial election, becoming the fourth president to be elected while receiving fewer popular votes nationwide than his opponent. Bush is the second president to have been the son of a former president, the first being John Quincy Adams. He is also the brother of Jeb Bush, former Governor of Florida.Eight months into Bush's first term as president, the September 11, 2001 terrorist attacks occurred   more
1 vote
0 comments
George W. Bush - Voter Comments
No Comments
Vote & Comment
5

Adolf Hitler was an Austrian-born German politician and the leader of the Nazi Party. He was chancellor of Germany from 1933 to 1945 and dictator of Nazi Germany from 1934 to 1945. Hitler was at the centre of Nazi Germany, World War II in Europe, an... d the Holocaust.Hitler was a decorated veteran of World War I. He joined the German Workers' Party in 1919, and became leader of the NSDAP in 1921. In 1923, he attempted a coup in Munich to seize power. The failed coup resulted in Hitler's imprisonment, during which time he wrote his memoir, Mein Kampf. After his release in 1924, Hitler gained popular support by attacking the Treaty of Versailles and promoting Pan-Germanism, antisemitism, and anti-communism with charismatic oratory and Nazi propaganda. Hitler frequently denounced international capitalism and communism as being part of a Jewish conspiracy.Hitler's Nazi Party became the largest democratically elected party in the German Reichstag, leading to his appointment as chancellor in 1933   more
1 vote
0 comments
Adolf Hitler - Voter Comments
No Comments
Vote & Comment
6

Nero was Roman Emperor from 54 to 68, and the last in the Julio-Claudian dynasty. Nero was adopted by his great-uncle Claudius to become his heir and successor, and succeeded to the throne in 54 following Claudius' death.Nero focused much of his att... ention on diplomacy, trade, and enhancing the cultural life of the Empire. He ordered theaters built and promoted athletic games. During his reign, the redoubtable general Corbulo conducted a successful war and negotiated peace with the Parthian Empire. His general Suetonius Paulinus crushed a revolt in Britain. Nero annexed the Bosporan Kingdom to the Empire and began the First Roman–Jewish War.In 64 AD, most of Rome was destroyed in the Great Fire of Rome, which many Romans believed Nero himself had started in order to clear land for his planned palatial complex, the Domus Aurea. In 68, the rebellion of Vindex in Gaul and later the acclamation of Galba in Hispania drove Nero from the throne. Facing a false report of being denounced as a public enemy who was to be executed, he committed suicide on 9 June 68. His death ended the Julio-Claudian Dynasty, sparking a brief period of civil wars known as the Year of the Four Emperors   more
1 vote
0 comments
Nero - Voter Comments
No Comments
Vote & Comment
7

Claudius was Roman emperor from 41 to 54. A member of the Julio-Claudian dynasty, he was the son of Drusus and Antonia Minor. He was born at Lugdunum in Gaul, the first Roman Emperor to be born outside Italy. Because he was afflicted with a limp and...  slight deafness due to sickness at a young age, his family ostracized him and excluded him from public office until his consulship, shared with his nephew Caligula in 37.Claudius' infirmity probably saved him from the fate of many other nobles during the purges of Tiberius and Caligula's reigns; potential enemies did not see him as a serious threat. His survival led to his being declared Emperor by the Praetorian Guard after Caligula's assassination, at which point he was the last man of his family.Despite his lack of experience, Claudius proved to be an able and efficient administrator. He was also an ambitious builder, constructing many new roads, aqueducts, and canals across the Empire. During his reign the Empire began the conquest of Britain. Having a personal interest in law, he presided at public trials, and issued up to twenty edicts a day   more
0 votes
0 comments
Claudius - Voter Comments
No Comments
Vote & Comment
8

Vladimir Putin is a Russian politician, former KGB agent, and the current president of the Russian Federation. Widely accused of fixing elections, corruption, and fraud, Putin has come under fire for cracking down on the civil rights and freedom of ... the Russian people, including suppressing and detaining journalists, critics, and protesters, and for the invasion of Crimea, and involvement in eastern Ukraine, where a Russian SAM brought down an airliner. He has also sold weapons to regimes such as Syria and Iran, and supplied Haman's and Hezbollah with arms   more
0 votes
0 comments
Vladimir Putin - Voter Comments
No Comments
Vote & Comment
9

"Caligula" was the popular nickname of Gaius, Roman emperor from 37 AD to 41 AD. Caligula was a member of the house of rulers conventionally known as the Julio-Claudian dynasty. Caligula's father Germanicus, the nephew and adopted son of Emperor Tib... erius, was a very successful general and one of Rome's most beloved public figures. The young Gaius earned the nickname Caligula from his father's soldiers while accompanying him during his campaigns in Germania.When Germanicus died at Antioch in 19 AD, his wife Agrippina the Elder returned to Rome with her six children where she became entangled in an increasingly bitter feud with Tiberius. This conflict eventually led to the destruction of her family, with Caligula as the sole male survivor. Unscathed by the deadly intrigues, Caligula accepted the invitation to join the emperor on the island of Capri in 31 AD, where Tiberius himself had withdrawn five years earlier. With the death of Tiberius in 37 AD, Caligula succeeded his great uncle and adoptive grandfather   more
0 votes
0 comments
Caligula - Voter Comments
No Comments
Vote & Comment
10

Angela Merkel is the current Chancellor of Germany and the head of the political party CDU in Germany. In addition to being the first female German Chanchellor, she is also considered by Forbes magazine to be the most powerful woman in the world.
0 votes
0 comments
Angela Merkel - Voter Comments
No Comments
Vote & Comment
Leave a comment...
(Maximum 900 words)