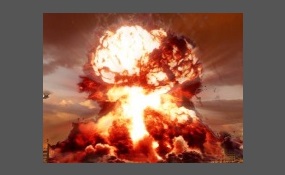 Which of these nuclear countries are least likely to start a nuclear war?

China, officially the People's Republic of China, is a sovereign state located in East Asia. It is the world's most populous country, with a population of over 1.35 billion. The PRC is a single-party state governed by the Communist Party, with its s... eat of government in the capital city of Beijing. It exercises jurisdiction over 22 provinces, five autonomous regions, four direct-controlled municipalities, and two mostly self-governing special administrative regions. The PRC also claims the territories governed by the Republic of China, a separate political entity commonly known as Taiwan today, as a part of its territory, which includes the island of Taiwan as Taiwan Province, Kinmen and Matsu as a part of Fujian Province and islands the ROC controls in the South China Sea as a part of Hainan Province, a claim which is controversial due to the complex political status of Taiwan.Covering approximately 9.6 million square kilometers, China is the world's second-largest country by land area, and either the third or fourth-largest by total area, depending on the method of measurement   more
20 votes
7 comments
China - Voter Comments

imabench says2015-08-26T01:54:49.2639373Z
Report Post
Russia's nuclear warning system is complete sh**, so they are the most likely to fire off a nuke, and since the US has a knack for invading nations while China does not, I have to give the tie-breaker to china

The United States of America, commonly referred to as the United States, America, and sometimes the States, is a federal republic consisting of 50 states and a federal district. The 48 contiguous states and Washington, D.C., are in central North Ame... rica between Canada and Mexico. The state of Alaska is the northwestern part of North America and the state of Hawaii is an archipelago in the mid-Pacific. The country also has five populated and nine unpopulated territories in the Pacific and the Caribbean. At 3.80 million square miles and with around 318 million people, the United States is the world's third- or fourth-largest country by total area and third-largest by population. It is one of the world's most ethnically diverse and multicultural nations, the product of large-scale immigration from many countries. The geography and climate of the United States is also extremely diverse, and it is home to a wide variety of wildlife.Paleo-Indians migrated from Eurasia to what is now the U.S. mainland around 15,000 years ago, with European colonization beginning in the 16th century. The United States emerged from 13 British colonies located along the Atlantic seaboard   more
4 votes
1 comment
United States of America - Voter Comments

Russia, also officially known as the Russian Federation, is a country in northern Eurasia. It is a federal semi-presidential republic. From northwest to southeast, Russia shares land borders with Norway, Finland, Estonia, Latvia, Lithuania and Polan... d, Belarus, Ukraine, Georgia, Azerbaijan, Kazakhstan, China, Mongolia, and North Korea. It shares maritime borders with Japan by the Sea of Okhotsk and the US state of Alaska across the Bering Strait. At 17,075,400 square kilometres, Russia is the largest country in the world, covering more than one-eighth of the Earth's inhabited land area. Russia is also the world's ninth most populous nation with 143 million people as of 2012. Extending across the entirety of northern Asia and much of Eastern Europe, Russia spans nine time zones and incorporates a wide range of environments and landforms.The nation's history began with that of the East Slavs, who emerged as a recognizable group in Europe between the 3rd and 8th centuries AD. Founded and ruled by a Varangian warrior elite and their descendants, the medieval state of Rus arose in the 9th century   more
1 vote
0 comments
Russia - Voter Comments
No Comments
Vote & Comment
Leave a comment...
(Maximum 900 words)

Vox_Veritas says2015-08-26T01:44:47.3652790Z
Report Post
During the Cold War the USA was convinced that the Russians were going to destroy them sometime soon, and yet they never used those weapons during the Cold War. Today the U.S. enjoys superpower status and its current tensions with Russia aren't quite as high as they were during the Cold War. There's less reason for the U.S. to use these weapons than there was then. China is building up its military forces and it's becoming more aggressive. Be rest assured that they aren't any less likely to use nukes than we are.

bballcrook21 says2015-08-26T02:24:10.2968259Z
Report Post
China has the fewest nuclear weapons and a very dependent economy. They could never drop a nuclear bomb on another nuclear nation without their economy crumbling.

Kreakin says2015-08-28T19:39:56.7543166Z
Report Post
Only because they have to trade with a capitalist system, and to that extent they modified their ideology regarding this. They are still communist in ideology and political structure though. I guess it shows that enough money will make any nation reassess their views.

triangle.128k says2015-08-28T19:58:37.0184465Z
Report Post
If China was entirely socialist or even communist, there wouldn't be a bunch of entrepreneur millionaires in China.
Privacy Policy | Terms of Use
Sitemap | View Desktop Version
©2021 Debate.org. All rights reserved.