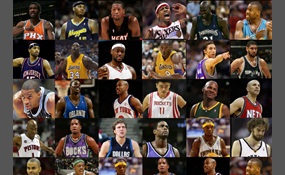 Which one is the best player in NBA History?

Michael Jeffrey Jordan, also known by his initials, MJ, is an American former professional basketball player, entrepreneur, and principal owner and chairman of the Charlotte Hornets. He played 15 seasons in the National Basketball Association for th... e Chicago Bulls and Washington Wizards. His biography on the NBA website states, "By acclamation, Michael Jordan is the greatest basketball player of all time." Jordan was one of the most effectively marketed athletes of his generation and was considered instrumental in popularizing the NBA around the world in the 1980s and 1990s.After a three-season career at the University of North Carolina at Chapel Hill, where he was a member of the Tar Heels' national championship team in 1982, Jordan joined the NBA's Chicago Bulls in 1984. He quickly emerged as a league star, entertaining crowds with his prolific scoring. His leaping ability, illustrated by performing slam dunks from the free throw line in slam dunk contests, earned him the nicknames "Air Jordan" and "His Airness". He also gained a reputation for being one of the best defensive players in basketball   more
5 votes
1 comment
Michael Jordan - Voter Comments

LeBron Raymone James is an American professional basketball player for the Miami Heat of the National Basketball Association. Standing at 6 ft 8 in and weighing 250 lb, he has started at the small forward and power forward positions. James has won t... wo NBA championships, four NBA Most Valuable Player Awards, two NBA Finals MVP Awards, two Olympic gold medals, an NBA scoring title, and the NBA Rookie of the Year Award. He has also been selected to ten NBA All-Star teams, ten All-NBA teams, and six All-Defensive teams, and is the Cleveland Cavaliers' all-time leading scorer.James played high school basketball at St. Vincent–St. Mary High School in his hometown of Akron, Ohio, where he was highly promoted in the national media as a future NBA superstar. After graduating, he was selected with the first overall pick in the 2003 NBA Draft by the Cavaliers. James led Cleveland to the franchise's first Finals appearance in 2007, losing to the San Antonio Spurs in a sweep. In 2010, he left the Cavaliers for the Heat in a highly publicized free agency period. In his first season in Miami, the Heat reached the Finals but lost to the Dallas Mavericks   more
1 vote
1 comment
LeBron James - Voter Comments

Timothy Theodore "Tim" Duncan is an American professional basketball player who has played his entire career for the San Antonio Spurs of the National Basketball Association. The 6-foot 11-inch, 250-pound power forward/center is a four-time NBA cham... pion, two-time NBA MVP, three-time NBA Finals MVP, and NBA Rookie of the Year. He is a 14-time NBA All-Star and the only player to be selected to both the All-NBA and All-Defensive Teams during all of his first 13 seasons.Duncan started out as a swimmer and only began playing basketball in ninth grade after Hurricane Hugo destroyed the only Olympic-sized pool on his home of St. Croix, U.S. Virgin Islands. He soon became a standout for St. Dunstan's Episcopal High School, and had an illustrious college career with the Wake Forest University Demon Deacons, winning the Naismith College Player of the Year, USBWA College Player of the Year and John Wooden awards in his final year. Duncan graduated from college before entering the 1997 NBA Draft as the number one pick   more
0 votes
0 comments
Tim Duncan - Voter Comments
No Comments
Vote & Comment
5

Kobe Bean Bryant is an American professional basketball player for the Los Angeles Lakers of the National Basketball Association. He entered the NBA directly from high school, and has played for the Lakers his entire career, winning five NBA champio... nships. Bryant is a 16-time All-Star, 15-time member of the All-NBA Team, and 12-time member of the All-Defensive team. As of March 2013, he ranks third and fourth on the league's all-time postseason scoring and all-time regular season scoring lists, respectively.Bryant enjoyed a successful high school basketball career at Lower Merion High School in Pennsylvania, where he was recognized as the top high school basketball player in the country. He declared his eligibility for the NBA Draft upon graduation, and was selected with the 13th overall pick in the 1996 NBA Draft by the Charlotte Hornets, then traded to the Los Angeles Lakers. As a rookie, Bryant earned himself a reputation as a high-flyer and a fan favorite by winning the 1997 Slam Dunk Contest.Bryant and Shaquille O'Neal led the Lakers to three consecutive championships from 2000 to 2002   more
0 votes
0 comments
Kobe Bryant - Voter Comments
No Comments
Vote & Comment
6

He was a player for the "Showtime" Lakers during the 80s. He was a really good player and was part of the 80s Lakers Dynasty.
0 votes
0 comments
Earvin (Magic) Johnson - Voter Comments
No Comments
Vote & Comment
7

Larry Joe Bird is an American former professional basketball player for the Boston Celtics of the National Basketball Association. Since retiring as a player, he has been a mainstay of the Indiana Pacers organization, currently serving as team presi... dent. Drafted into the NBA sixth overall by the Boston Celtics in 1978, Bird started at small forward and power forward for thirteen seasons, spearheading one of the NBA's most formidable frontcourts that included center Robert Parish and forward Kevin McHale. Bird was a 12-time NBA All-Star and was named the league's Most Valuable Player three times. He played his entire professional career for Boston, winning three NBA championships and two NBA Finals MVP awards.Due to chronic back problems, he retired as a player in 1992. He was a member of the 1992 United States men's Olympic basketball team that won the gold medal at the 1992 Summer Olympics. Bird was voted to the NBA's 50th Anniversary All-Time Team in 1996 and inducted into the Naismith Memorial Basketball Hall of Fame in 1998.He served as head coach of the Indiana Pacers from 1997 to 2000   more
0 votes
0 comments
Larry Bird - Voter Comments
No Comments
Vote & Comment
8

Hakeem Abdul "The Dream" Olajuwon is a retired Nigerian-American professional basketball player. From 1984 to 2002, he played the center position in the National Basketball Association for the Houston Rockets and Toronto Raptors. He led the Rockets ... to back-to-back NBA championships in 1994 and 1995. In 2008, he was inducted into the Basketball Hall of Fame. Listed at 7 ft 0 in, Olajuwon is considered one of the greatest centers ever to play the game.Born in Lagos, Nigeria, Olajuwon traveled from his home country to play for the University of Houston under Coach Guy Lewis. His college career for the Cougars included three trips to the Final Four. At that time, he spelled his first name Akeem. Olajuwon was drafted by the Houston Rockets with the first overall selection of the 1984 NBA Draft, a draft that included Michael Jordan, Charles Barkley, and John Stockton. In Houston he was nicknamed "Akeem The Dream" for his grace on and off the court. He combined with the 7 ft 4 in Ralph Sampson to form a duo dubbed the "Twin Towers". The two led the Rockets to the 1986 NBA Finals, where they lost in six games to the Boston Celtics   more
0 votes
0 comments
Hakeem Olajuwon - Voter Comments
No Comments
Vote & Comment
No comments yet.
Leave a comment...
(Maximum 900 words)
Privacy Policy | Terms of Use
Sitemap | View Desktop Version
©2021 Debate.org. All rights reserved.