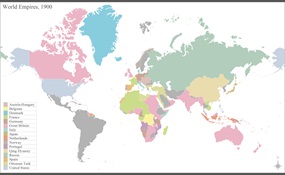 Which one out of the following empires should be allowed to return?

In the past, many empires dominated the world! But which one should be allowed to return do you think?

The British Empire comprised the dominions, colonies, protectorates, mandates and other territories ruled or administered by the United Kingdom. It originated with the overseas possessions and trading posts established by England between the late 16... th and early 18th centuries. At its height, it was the largest empire in history and, for over a century, was the foremost global power. By 1922 the British Empire held sway over about 458 million people, one-fifth of the world's population at the time. The empire covered more than 33,700,000 km², almost a quarter of the Earth's total land area. As a result, its political, legal, linguistic and cultural legacy is widespread. At the peak of its power, the phrase "the empire on which the sun never sets" was often used to describe the British Empire, because its expanse around the globe meant that the sun was always shining on at least one of its territories.During the Age of Discovery in the 15th and 16th centuries, Portugal and Spain pioneered European exploration of the globe, and in the process established large overseas empires   more
6 votes
3 comments
British Empire - Voter Comments

The Roman Empire was the post-Republican period of the ancient Roman civilization, characterized by government headed by emperors, and large territorial holdings around the Mediterranean Sea in Europe, Africa, and Asia. The 500 year old republic whi... ch preceded it was severely destabilized in a series of civil wars and political conflict, during which Julius Caesar was appointed as perpetual dictator and then assassinated in 44 BC. Civil wars and executions continued, culminating in the victory of Octavian, Caesar's adopted son, over Mark Antony and Cleopatra at the Battle of Actium in 31 BC and the annexation of Egypt. Octavian's power was now unassailable and in 27 BC the Roman Senate formally granted him overarching power and the new title Augustus, effectively marking the end of the Roman Republic.The imperial successor to the Republic endured for some 500 years. The first two centuries of the Empire's existence were a period of unprecedented political stability and prosperity known as the Pax Romana, or "Roman Peace". Following Octavian's victory, the size of the Empire was dramatically increased   more
4 votes
0 comments
Roman Empire - Voter Comments
No Comments
Vote & Comment
3

The German Empire was the historical German nation state that existed from the unification of Germany in 1871 to the abdication of Kaiser Wilhelm II in November 1918, when Germany became a federal republic. During its entire existence, the only war ... the German Empire fought, World War I, also led to its end. The state was the predecessor of today's Germany. The Empire is sometimes called the German Reich.The German Empire consisted of 27 constituent territories. While the Kingdom of Prussia contained most of the population and most of the territory of the empire, the Prussian leaders were supplanted by leaders from all over Germany, and Prussia itself played a lesser role. As Dwyer points out, Prussia's "political and cultural influence had diminished considerably" by the 1890s. The German Empire's three largest neighbours were all rivals: Imperial Russia to the east, France to the west, and Austria-Hungary, a rival but also an ally, to the south-east.After 1850, the states of Germany had rapidly become industrialized, with particular strengths in coal, iron, chemicals, and railways   more
2 votes
1 comment
German Empire - Voter Comments

jeroesch says2015-04-15T01:30:55.9045723-05:00
Report Post
The European Union is the defacto return of the German empire! Austria should join the Federal Republic of Germany. This would strengthen the EU further by strengthening Germany allowing it to more effectively manage the bailout of Greece, Spain, and Portugal.
Vote & Comment
4

Nazi Germany and the Third Reich are names for Germany from 1933 to 1945, when it was under control of Adolf Hitler and the Nazi Party. Under Hitler's rule, Germany was transformed into a fascist totalitarian state which controlled nearly all aspect... s of life. Nazi Germany ceased to exist after the Allied Forces defeated Germany in May 1945, ending World War II in Europe.Hitler was appointed Chancellor of Germany by the President of the Weimar Republic Paul von Hindenburg on 30 January 1933. The Nazi Party then began to eliminate all political opposition and consolidate its power. Hindenburg died on 2 August 1934, and Hitler became dictator of Germany by merging the powers and offices of the Chancellery and Presidency. A national referendum held 19 August 1934 confirmed Hitler as sole Führer of Germany. All power was centralised in Hitler's hands, and his word became above all laws. The government was not a coordinated, co-operating body, but a collection of factions struggling for power and Hitler's favour. In the midst of the Great Depression, the Nazis restored economic stability and ended mass unemployment using heavy military spending and a mixed economy   more
1 vote
1 comment
Nazi Germany - Voter Comments

The Spanish Empire comprised territories and colonies administered by the Spanish Crown in Europe, the Americas, Africa, Asia and Oceania. It originated during the Age of Exploration after the voyages of Christopher Columbus as one of the first glob... al empires. Under the Spanish Habsburgs, Spain reached the peak of its political and economic power, becoming the foremost global power of the time. Spain's territorial reach beyond Europe included the Greater Antilles, half of South America, most of Central America and much of North America, as well as a number of Pacific Ocean archipelagos including the Philippines.The bulk of Spain's Empire was held for over three centuries, starting in 1492 with the Spanish colonization of the Americas and lasting until the early 19th century Spanish American wars of independence that left only Cuba, Puerto Rico, and the Philippines as Spanish. Following the Spanish–American War of 1898, Spain ceded its last colonies in the Caribbean and the Pacific to the United States. Its last African colonies were granted independence in 1975   more
1 vote
0 comments
Spanish Empire - Voter Comments
No Comments
Vote & Comment
6

The Portuguese Empire, also known as the Portuguese Overseas or the Portuguese Colonial Empire, was the first global empire in history. In addition, it was the longest-lived of the modern European colonial empires, spanning almost six centuries, fro... m the capture of Ceuta in 1415 to the handover of Macau in 1999 or the grant of sovereignty to East Timor in 2002. The empire spread throughout a vast number of territories that are now parts of 53 different sovereign states.Portuguese sailors began exploring the coast of Africa in 1419, using recent developments in navigation, cartography and maritime technology such as the caravel, in order that they might find a sea route to the source of the lucrative spice trade. In 1488, Bartolomeu Dias rounded the Cape of Good Hope, and in 1498, Vasco da Gama reached India. In 1500, either by an accidental landfall or by the crown's secret design, Pedro Álvares Cabral discovered Brazil on the South American coast. Over the following decades, Portuguese sailors continued to explore the coasts and islands of East Asia, establishing forts and factories as they went   more
0 votes
0 comments
Portuguese Empire - Voter Comments
No Comments
Vote & Comment
7

French Empire was a very large empire comprising most of northern Africa. It collapsed in the late 20th century, however today, it still has a few territories such as French Guiana...
0 votes
0 comments
French Empire - Voter Comments
No Comments
Vote & Comment
8

Vichy France, officially the French State, was the government of Marshal Philippe Pétain's regime 1940–44, during World War II. From 1940 to 1942, while nominally the government of France as a whole, Vichy only fully controlled the unoccupied zone i... n southern France, while Germany occupied northern France. Following the Allied landings in French North Africa on 8 November 1942, southern France was also occupied by the Axis on 11 November 1942 through the enactment of Case Anton. The Vichy regime remained in existence, but was reduced to a puppet government.After being appointed Premier of France by President Albert Lebrun, Marshal Pétain ordered his men to sign the Second Armistice at Compiègne on 22 June 1940 with Germany. He then established an authoritarian regime by gaining full powers on 10 July 1940 to replace the French Third Republic that was dissolving due to the fall of France earlier in 1940.The newly formed French State maintained nominal sovereignty over the whole of French territory as defined by the armistice, per standard international law, and full sovereignty only in the unoccupied southern zone libre   more
0 votes
0 comments
Vichy France - Voter Comments
No Comments
Vote & Comment
9

The Italian Empire was created after the Kingdom of Italy joined other European powers in establishing colonies overseas during the Scramble for Africa. Modern Italy, as a unified state, had only existed from 1861. By this time, France, Spain, Portu... gal, Britain and the Netherlands had been carving out large empires for several hundred years. One of the last remaining areas open to colonisation was on the African continent.By the outbreak of World War I in 1914, Italy had annexed Eritrea, Somalia, Libya and the Dodecanese Islands; it was also one of the European concession holders in Tientsin. Italy was defeated in its first attempt to conquer Ethiopia in the First Italo-Ethiopian War of 1895–1896 with Ethiopia receiving modern weapons and support from Russia and France, but succeeded in occupying it in the Second Italo-Ethiopian War of 1935–1936. During World War I, the Italian army captured Albania, which was declared an Italian protectorate in 1917, and, by the end of hostilities in November 1918, had captured the entire portion of Dalmatia that had been guaranteed to Italy by the Treaty of London   more
0 votes
0 comments
Italian Empire - Voter Comments
No Comments
Vote & Comment
10

Italian Fascism, also known simply as Fascism, is the original fascist ideology, as developed in Italy. The ideology is associated with the National Fascist Party, which under Benito Mussolini ruled the Kingdom of Italy from 1922 until 1943, the Rep... ublican Fascist Party that ruled the Italian Social Republic from 1943 to 1945, the post-war Italian Social Movement and subsequent Italian neo-fascist movements.Italian Fascism was rooted in Italian nationalism and the desire to restore and expand Italian territories, which Italian Fascists deemed necessary for a nation to assert its superiority and strength and to avoid succumbing to decay. Italian Fascists claimed that modern Italy is the heir to ancient Rome and its legacy, and historically supported the creation of an Italian Empire to provide spazio vitale for colonization by Italian settlers and to establish control over the Mediterranean Sea.Italian Fascism promoted a corporatist economic system whereby employer and employee syndicates are linked together in associations to collectively represent the nation's economic producers and work alongside the state to set national economic policy   more
0 votes
0 comments
Italian Fascism - Voter Comments
No Comments
Vote & Comment
Leave a comment...
(Maximum 900 words)