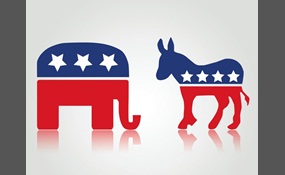 Which political party (and associated candidates) is best to lead this nation?

The United States has been divided between two parties for the majority of its life, Republican and Democrat, but are candidates of these two parties really the best? This goes by political party in general, but you can choose a candidate if you really feel it's necessary. (Feel free to add one that you think should be included in the "others" category)

The Libertarian Party is an American national political party that reflects, represents and promotes the ideas and philosophies of libertarianism and free-market, laissez-faire capitalism. The Libertarian Party was formed in Colorado Springs, Colora... do, in the home of David F. Nolan on December 11, 1971. The founding of the party was prompted in part due to concerns about the Vietnam War, conscription, and the end of the gold standard. Although there is not an explicitly-labeled "left" or "right" designation of the party, many members, such as 2012 presidential nominee Gary Johnson, state that they are more socially liberal than the Democrats, but more fiscally conservative than the Republicans. The party has generally promoted a classical liberal platform, in contrast to the social liberal and progressive platform of the Democrats and the more conservative platform of the Republicans. Current policy positions include lowering taxes, allowing people to opt-out of Social Security, abolishing welfare, ending the prohibition of illegal drugs, and supporting gun ownership rights   more
9 votes
1 comment
Libertarian Party - Voter Comments

The Republican Party, also commonly called the GOP, is one of the two major contemporary political parties in the United States, the other being the Democratic Party. Founded by anti-slavery activists in 1854, it dominated politics nationally for mo... st of the period from 1860 to 1932. There have been 18 Republican presidents, the first being Abraham Lincoln, serving from 1861 to 1865, and the most recent being George W. Bush, serving from 2001 to 2009. The most recent Republican presidential nominee was former Massachusetts Governor Mitt Romney in 2012. The party's platform is generally based upon American conservatism, in contrast to the Democratic Party, which supports contemporary American liberalism. American conservatism of the Republican Party is not wholly based upon rejection of the political ideology of liberalism; some principles of American conservatism are based on classical liberalism and a significant portion of the Republican base is made up of neoliberals and other free market, pro-capitalism factions. Some notable Republican candidates are Ronald Reagan and Abraham Lincoln. With the most recent being George W. Bush   more
7 votes
1 comment
Republican Party - Voter Comments

It is fairly obvious that all other political parties and the candidates associated with them are inadequate, incompetent, and cannot properly represent nor help the people of the United States. Thus, we can only come to the conclusion that some ran... dom person on the internet holds this nation's best interests at heart. Whether this person is some random homeless man with a computer or someone who truly can lead this nation to greatness is unknown. However, what we do know is that this person is a better choice than all of the other parties listed, obviously. This person shares no common ideology with any of the other parties, but he is CLEARLY the lesser of all the other evils. Who better to represent the people than the people? His notable slogans are: "I promise I will never promise anything", "If you must waste your vote on someone, waste it on me", "I'm not popular and I'm not handsome, but I know I can do something", and "We've all made worse mistakes, vote for me.   more
7 votes
4 comments
Me - Voter Comments

It is fairly obvious that no party or candidate can lead this nation. Every one who is running or will run is corrupt and only hold their own best interests at heart. All modern parties are all the same and as are their candidates. Every election ma... tters not as every candidate is just another dictator here to exploit us. If we can abolish the party system maybe we can finally effectively run this country. No gods, no masters   more
3 votes
0 comments
No One - Voter Comments
No Comments
Vote & Comment
5

The Democratic Party is one of the two major contemporary political parties in the United States, along with the younger Republican Party. Tracing its origins back to the Democratic-Republican Party, the modern Democratic Party was founded around 18... 28. There have been 15 Democratic presidents, the first being Andrew Jackson, who served from 1829 to 1837; the most recent is the current president, Barack Obama, who has served since 2009.Since the 1930s, the party has promoted a social liberal platform. Until the late 20th century the party had a powerful conservative and populist wing based in the rural South, which over time has greatly diminished. Today its Congressional caucus is composed mostly of progressives and centrists.As of the 113th Congress, following the 2012 elections, the Democratic Party holds a minority of seats in the House of Representatives and a majority of seats in the United States Senate, as well as a minority of state governorships and control of a minority of state legislatures   more
2 votes
0 comments
Democratic Party - Voter Comments
No Comments
Vote & Comment
7

Are you part of a political party that is obscure enough to not make the top eight? Well, if that is so then I really doubt your chosen party will ever make it into office. Regardless, your chosen party is CLEARLY better than the other parties and t... hus you rule! Feel like your party should be known? Post it in the comments! (Swear to Darwin if you choose the Vegetarian, Pirate, or the Common Sense Party I will do nothing because I have no real power, but I will frown upon you nonetheless!   more
2 votes
1 comment
Other - Voter Comments

The Progressive party is a right-wing Brazilian political party embracing conservatism.Founded in 1995, as Brazilian Progressive Party, by the union of:the Reform Progressive Party, founded in 1993 by Democratic Social Party and Christian Democratic...  Party;the Progressive Party, founded in 1993 by the Social Labour Party and the Reform Labour Party.The party entered in coalition with the Brazilian Social Democracy Party and the Liberal Front Party, supporting President Fernando Henrique Cardoso. In 2003 the party re-changed its name to the Progressive Party. PP has also supported the Workers' Party government since 2003.At the parliamentary elections, held in October 2006, the party won 42 of the 513 seats in the chamber of deputies, and it has 1 of the 81 seats in the Senate. At the 2010 elections, PP won 41 seats in the Chamber of Deputies, and made gains in the Senate for a total of 5 seats. It lost an extremely close gubernatorial runoff in Roraima to the PSDB, and won no state governorships   more
1 vote
0 comments
Socialist Party USA - Voter Comments
No Comments
Vote & Comment
9

The Constitution Party is a right-wing political party in the United States. The party asserts that the US is a Christian nation founded on the Bible and that US jurisprudence should be restored to what the party claims is its "Biblical foundations"... . This has led to its being described by critics as a theocratic party, as was its predecessor. The Constitution Party advocates a platform which reflects the Party's understanding of the principles set forth in the Declaration of Independence, the Constitution of the United States, the Bible, and the Bill of Rights.The party was founded as the "U.S. Taxpayers' Party" by Howard Philips in 1991. Phillips was the party's candidate in the 1992, 1996 and 2000 presidential elections. The party's official name was changed to The Constitution Party in 1999; however, some state affiliate parties are known under different names. The party's platform is predicated on the party's understanding of the original intent of the nation's founding documents. The party absorbed the American Independent Party, originally founded for George Wallace's 1968 presidential campaign   more
0 votes
0 comments
Constitution Party - Voter Comments
No Comments
Vote & Comment
11

Reform Party of the United States of America

The Reform Party of the United States of America, generally known as the Reform Party USA or the Reform Party, is a political party in the United States, founded in 1995 by Ross Perot. Perot said Americans were disillusioned with the state of politi... cs—as being corrupt and unable to deal with vital issues—and desired a viable alternative to the Republican and Democratic Parties. The party has nominated different candidates over the years, such as founder Ross Perot, Pat Buchanan, and Ralph Nader.The party's most significant victory came when Jesse Ventura was elected governor of Minnesota in 1998   more
0 votes
0 comments
Reform Party of the United States of America - Voter Comments
No Comments
Vote & Comment
12

In politics, an independent or nonpartisan politician is an individual politician not affiliated to any political party. There are numerous reasons why someone may stand for office as an independent.Independents may hold a centrist viewpoint between...  those of major political parties. Sometimes they hold a viewpoint more extreme than any major party, have an ideology comprising ideas from both sides of the political spectrum, or may have a viewpoint based on issues that they do not feel that any major party addresses.Other independent politicians may be associated with a political party, be former members of it, or have views that align with it, but choose not to stand under its label. Others may belong to or support a political party but believe they should not formally represent it and thus be subject to its policies.In some countries political parties are illegal and all candidates effectively stand as independents.In running for public office, independents sometimes choose to form an alliance rather than a party, and formally register their "independents" group. Some other independent candidates choose to aggregate themselves as a political party   more
0 votes
0 comments
American Independent Party - Voter Comments
No Comments
Vote & Comment
No comments yet.
Leave a comment...
(Maximum 900 words)
Privacy Policy | Terms of Use
Sitemap | View Desktop Version
©2021 Debate.org. All rights reserved.