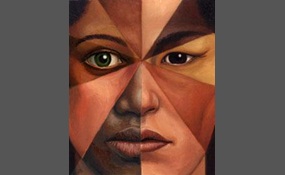 Which Race are you?

Americans, or American people, are citizens of the United States of America. This definition also includes certain individuals who are considered to be nationals of the United States of America. The country is home to people of different national or... igins. As a result, Americans do not equate their nationality with ethnicity, but with citizenship. With the exception of the Native American population, generally all Americans or their ancestors immigrated within the past five centuries. Also, there are other groups that did not immigrate to the United States but became American because of American expansion in the late 1800s. These groups are people from Hawaii, Puerto Rico, Guam, and the Philippine Islands.Despite its multi-ethnic composition, the culture held in common by most Americans is referred to as mainstream American culture, a Western culture largely derived from the traditions of Northern and Western European immigrants. It also includes influences of African-American culture. Westward expansion integrated the Creoles and Cajuns of Louisiana and the Hispanos of the Southwest and brought close contact with the culture of Mexico   more
5 votes
0 comments
Americans - Voter Comments
No Comments
Vote & Comment
3

Italians are a nation and ethnic group native to Italy who share a common Italian culture, ancestry and speak the Italian language as a mother tongue. Legally, Italians are citizens of the Italian Republic, regardless of ancestry or country of resid... ence, and are distinguished from people of Italian descent and from ethnic Italians living in territories adjacent to the Italian Peninsula.In 2010, in addition to about 56 million Italians in Italy, Italian-speaking autonomous groups are found in neighboring countries: about half a million in Switzerland, a large population in France, and smaller groups in Slovenia and Croatia, primarily in Istria and Dalmatia. Because of wide-ranging diaspora, about 5 million Italian citizens and nearly 80 million people of full or part Italian ancestry live outside of Italy, most notably in South America, North America, Australia and parts of Europe.Italians have greatly influenced and contributed to science, arts, technology, cuisine, sports and banking abroad and worldwide. Italian people are generally known for their localism, both regionalist and municipalist, attention to clothing and family values   more
1 vote
0 comments
Italian people - Voter Comments
No Comments
Vote & Comment
5

Australians are defined as people native to or resident in Australia.
1 vote
0 comments
Australians - Voter Comments
No Comments
Vote & Comment
6

The Japanese people are an ethnic group native to Japan. Japanese make up 98.5% of the total population. Worldwide, approximately 130 million people are of Japanese descent; of these, approximately 127 million are residents of Japan. People of Japan... ese ancestry who live in other countries are referred to as nikkeijin. In some contexts, Japanese ethnicity may also include the Yamato, Ainu, and Ryukyuan   more
1 vote
0 comments
Japanese - Voter Comments
No Comments
Vote & Comment
7

Hispanics Spanish: hispanos, hispánicos, or Latinos latinos are an ethnolinguistic group of Americans with origins in the countries of Latin America and Spain. More generally it includes all persons in the United States who self-identify as Hispanic...  or Latino. Latin American population has origins in all the continents and has ancestries including many Native American cultures, Hispanic and Latino Americans are separate terms that are racially diverse, and as a result form an ethnic category, rather than a race. In the 2010 Census, 53% Hispanics in the US self-identified as white, while 37% were Mestizos.While the two terms are sometimes used interchangeably, Hispanic is a narrower term and refers mostly to persons of Spanish-speaking ancestry, while Latino is more frequently used to refer more generally to anyone of Latin American origin or ancestry, including Brazilians. Hispanic thus includes Spanish speaking Latin Americans countries, excluding Brazilians while Latino includes both Spanish-speaking and Portuguese-speaking Latin Americans, but excluding Spain   more
0 votes
0 comments
Hispanic and Latino Americans - Voter Comments
No Comments
Vote & Comment
8

Dutch people, occasionally referred to as Netherlanders, are an ethnic group native to the Netherlands. They share a common culture and speak the Dutch language. Dutch people and their descendants are found in migrant communities worldwide, notably ... in Suriname, Chile, Brazil, Canada, Australia, South Africa, New Zealand, and the United States.The traditional art and culture of the Dutch encompasses various forms of traditional music, dances, architectural styles and clothing, some of which are globally recognizable. Internationally, Dutch painters such as Rembrandt, Vermeer and Van Gogh are held in high regard. The dominant religion of the Dutch is Christianity, although in modern times the majority is no longer religious. Significant percentages of the Dutch are adherents of humanism, agnosticism, atheism or individual spirituality.In the Middle Ages the Low Countries were situated around the border of France and the Holy Roman Empire, forming a part of their respective peripheries, and the various territories of which they consisted had de facto become virtually autonomous by the 13th century   more
0 votes
0 comments
Dutch people - Voter Comments
No Comments
Vote & Comment
9