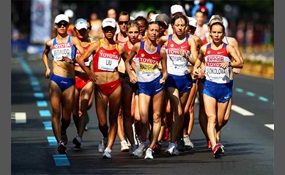 Which race is teh best

Running is a method of terrestrial locomotion allowing humans and other animals to move rapidly on foot. Running is a type of gait characterized by an aerial phase in which all feet are above the ground. This is in contrast to walking, where one foo... t is always in contact with the ground, the legs are kept mostly straight and the center of gravity vaults over the stance leg or legs in an inverted pendulum fashion. A characteristic feature of a running body from the viewpoint of spring-mass mechanics is that changes in kinetic and potential energy within a stride occur simultaneously, with energy storage accomplished by springy tendons and passive muscle elasticity. The term running can refer to any of a variety of speeds ranging from jogging to sprinting.It is assumed that the ancestors of mankind developed the ability to run for long distances about 2.6 million years ago, probably in order to hunt animals. Competitive running grew out of religious festivals in various areas. Records of competitive racing date back to the Tailteann Games in Ireland in 1829 BCE, while the first recorded Olympic Games took place in 776 BCE   more
2 votes
1 comment
Running - Voter Comments

Jogging is a form of trotting or running at a slow or leisurely pace. The main intention is to increase physical fitness with less stress on the body than from faster running, or to maintain a steady speed for longer periods of time. Performed over ... long distances, it is a form of aerobic endurance training   more
1 vote
0 comments
Jogging - Voter Comments
No Comments
Vote & Comment
3

Racewalking, or race walking, is a long-distance athletic event. Although it is a foot race, it is different from running in that one foot must appear to be in contact with the ground at all times. Stride length is reduced, so to achieve competitive...  speeds, racewalkers must attain cadence rates comparable to those achieved by Olympic 800-meter runners—and they must do so for hours at a time since the Olympic events are the 20 km race walk and 50 km race walk. 50 mile events are also held. Watching people walk was America's favorite spectator sport in the late 1800s   more
1 vote
0 comments
Racewalking - Voter Comments
No Comments
Vote & Comment
4

FIA Formula One World Championship is the highest class of single-seat auto racing that is sanctioned by the Fédération Internationale de l'Automobile. The "formula", designated in the name, refers to a set of rules with which all participants' cars...  must comply. The F1 season consists of a series of races, known as Grands Prix, held throughout the world on purpose-built circuits and public roads. The results of each race are evaluated using a points system to determine two annual World Championships, one for the drivers and one for the constructors. The racing drivers, constructor teams, track officials, organisers, and circuits are required to be holders of valid Super Licences, the highest class of racing licence issued by the FIA.Formula One cars are the fastest road course racing cars in the world, owing to very high cornering speeds achieved through the generation of large amounts of aerodynamic downforce. Formula One cars race at speeds of up to 360 km/h with engines currently limited in performance to a maximum of 15,000 RPM. The cars are capable of lateral acceleration in excess of five g in corners   more
1 vote
0 comments
Formula One - Voter Comments
No Comments
Vote & Comment
Leave a comment...
(Maximum 900 words)