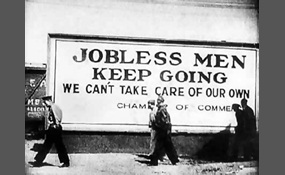 Which recent recession was the worst since the Great Depression?

We always hear from the media: "This recession is the worst since the Great Depression!" However, is it really?

When Ronald Reagan became president, the country in a bad economic condition and he decided to pass tax cuts, withdraw government intervention in the economy, and allow the Fed to reduce the money supply. Mainly a result of stagflation, this recessi... on saw a combination of both high unemployment peaking at 10.8% and high inflation, a really rare case   more
0 votes
0 comments
1981-1982 Recession - Voter Comments
No Comments
Vote & Comment
3

A combination of savings and loan, spike in oil prices, a tax increase, and the Gulf War resulted in more inflation and unemployment as high as 7.8%. President George H.W. Bush could do little to help the country out of recovery with his election sw... inging around and lost to Bill Clinton. After that the economy quickly recovered   more
0 votes
0 comments
1990-1991 Recession - Voter Comments
No Comments
Vote & Comment
4

The famous dot-com bubble of 1999 and 2000 burst in 2001 as a result of 9/11 and increased interests rate from the Fed to quell the stock market. Unemployment peaked at 6.3% and there was now major inflation problem. President George W. Bush cut tax... es in order to help quell the economic issues   more
0 votes
0 comments
Early 2000s recession - Voter Comments
No Comments
Vote & Comment
No comments yet.
Leave a comment...
(Maximum 900 words)
Privacy Policy | Terms of Use
Sitemap | View Desktop Version
©2021 Debate.org. All rights reserved.