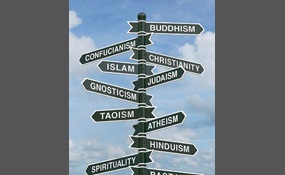 Buddhism is a nontheistic religion that encompasses a variety of traditions, beliefs and practices largely based on teachings attributed to Siddhartha Gautama, who is commonly known as the Buddha, meaning "the awakened one". According to Buddhist tr... adition, the Buddha lived and taught in the eastern part of the Indian subcontinent sometime between the 6th and 4th centuries BCE. He is recognized by Buddhists as an awakened or enlightened teacher who shared his insights to help sentient beings end their suffering through the elimination of ignorance and craving by way of understanding and the seeing of dependent origination and the Four Noble Truths, with the ultimate goal of attainment of the sublime state of Nirvana, by practicing the Noble Eightfold Path.Two major extant branches of Buddhism are generally recognized: Theravada and Mahayana. Theravada has a widespread following in Sri Lanka and Southeast Asia. Mahayana is found throughout East Asia and includes the traditions of Pure Land, Zen, Nichiren Buddhism, Tibetan Buddhism, Shingon, and Tiantai   more
11 votes
1 comment
Buddhism - Voter Comments

Christianityis a monotheistic religion centered on the life and teachings ofJesus of Nazareth as presented in the Holy Bible. Christiansbelieve Jesus to be the Son of God and the Messiah prophesied in theOld Testament. With an estimated 2.1 billion ... adherents in 2001,Christianity is the world's largest religion. It is the predominantreligion in Europe, the Americas, Sub-Saharan Africa, the PhilippineIslands, Australia, and New Zealand. Itis also growing rapidly in Asia, particularly in China and SouthKorea. Christianity began in the 1st century AD as a Jewishsect, and shares many religious texts with Judaism, specifically theHebrew Bible, known to Christians as the Old Testament. Like Judaism and Islam, Christianity is classified asan Abrahamic religion   more
8 votes
0 comments
Christianity - Voter Comments
No Comments
Vote & Comment
3

Mormonism is the predominant religious tradition of the Latter Day Saint movement of Restorationist Christianity. This movement was founded by Joseph Smith in the 1820s. During the 1830s and 1840s, Mormonism gradually distinguished itself from tradi... tional Protestantism. Mormonism today represents the new, non-Protestant faith taught by Smith in the 1840s. After Smith's death, most Mormons followed Brigham Young on his westward journey, calling themselves The Church of Jesus Christ of Latter-day Saints. Variations not a part of the LDS Church include Mormon fundamentalism, which seeks to maintain practices and doctrines such as polygamy that were abandoned by the LDS Church, and various other small independent denominations.The word Mormon is originally derived from the Book of Mormon, one of the faith's religious texts. Based on the name of that book, early followers of founder Joseph Smith were called Mormons, and their faith was called Mormonism. The term was initially considered pejorative, but is no longer considered so by Mormons   more
4 votes
3 comments
Mormonism - Voter Comments

Xzartex711kk says2018-10-22T03:27:07.8040884Z
Report Post
People of the Church of Jesus Christ of Latter Day Saints (As this is the actual name of the religion), Are generally very kind, Accepting, And charitable people. As a Church, Members world-wide are all taught the same standards and doctrine. Members are taught to serve others, And that when one is in the service of their fellow men, They are only in the service of their God.

Judaism is the religion, philosophy, and way of life of the Jewish people. Judaism is a monotheistic religion, with the Torah as its foundational text, and supplemental oral tradition represented by later texts such as the Midrash and the Talmud. Ju... daism is considered by religious Jews to be the expression of the covenantal relationship that God established with the Children of Israel.Judaism includes a wide corpus of texts, practices, theological positions, and forms of organization. Within Judaism there are a variety of movements, most of which emerged from Rabbinic Judaism, which holds that God revealed his laws and commandments to Moses on Mount Sinai in the form of both the Written and Oral Torah. Historically, this assertion was challenged by various groups such as the Sadducees and Hellenistic Judaism during the Second Temple period; the Karaites and Sabbateans during the early and later medieval period; and among segments of the modern reform movements. Liberal movements in modern times such as Humanistic Judaism may be nontheistic. Today, the largest Jewish religious movements are Orthodox Judaism, Conservative Judaism and Reform Judaism   more
2 votes
0 comments
Judaism - Voter Comments
No Comments
Vote & Comment
6

Sikhism, or known in Punjabi as Sikhi, is a monotheistic religion founded during the 15th century in the Punjab region of the Indian subcontinent, by Guru Nanak and continued to progress through the ten successive Sikh gurus. It is the fifth-largest...  organized religion in the world, with approximately 30 million adherents. Punjab, India is the only state in the world with a majority Sikh population.Adherents of Sikhism are known as Sikhs. According to Devinder Singh Chahal, "The word 'Sikhi' gave rise to the modern anglicized word 'Sikhism' for the modern world." Gurmat means literally 'wisdom of the Guru' in contrast to Manmat, or self-willed impulses.According to Sewa Singh Kalsi, "The central teaching in Sikhism is the belief in the concept of the oneness of God." Sikhism considers spiritual life and secular life to be intertwined. Guru Nanak, the first Sikh Guru established the system of the Langar, or communal kitchen, in order to demonstrate the need to share and have equality between all people. Sikhs also believe that "all religious traditions are equally valid and capable of enlightening their followers"   more
2 votes
2 comments
Sikhism - Voter Comments

Dhruva says2015-04-07T08:03:47.0802448-05:00
Report Post
Never met an extremist sikh, almost all i have met are sociable and friendly, and their religion doesn't contain much violence. The religion accepts everyone ultimately

Taoism is a philosophical, ethical, and religious tradition of Chinese origin that emphasizes living in harmony with the Tao. The term Tao means "way", "path" or "principle", and can also be found in Chinese philosophies and religions other than Tao... ism. In Taoism, however, Tao denotes something that is both the source and the force behind everything that exists.While Taoism drew its cosmological notions from the tenets of the School of Yin Yang, the Tao Te Ching, a compact and ambiguous book containing teachings attributed to Laozi, is widely considered its keystone work. Together with the writings of Zhuangzi, these two texts build the philosophical foundation of Taoism deriving from the 8 Hexagrams of Fu Xi in the 2700s BCE in China.Taoist propriety and ethics may vary depending on the particular school, but in general tends to emphasize wu-wei, "naturalness", simplicity, spontaneity, and the Three Treasures: compassion, moderation, and humility   more
2 votes
1 comment
Taoism - Voter Comments

Islam is a monotheistic and Abrahamic religion articulated by the Qur'an, a book considered by its adherents to be the verbatim word of God, and for some sects, also by the teachings and normative example of Muhammad, considered by them to be the la... st prophet of God. An adherent of Islam is called a Muslim.Muslims believe that God is one and incomparable and that the purpose of existence is to worship God. Muslims also believe that Islam is the complete and universal version of a primordial faith that was revealed many times before through prophets including Adam, Noah, Abraham, Moses, and Jesus. They maintain that the previous messages and revelations have been partially misinterpreted or altered over time, but consider the Arabic Qur'an to be both the unaltered and the final revelation of God. Religious concepts and practices include the five pillars of Islam, which are basic concepts and obligatory acts of worship, and following Islamic law, which touches on virtually every aspect of life and society, providing guidance on multifarious topics from banking and welfare, to family life and the environment   more
1 vote
1 comment
Islam - Voter Comments

Atheism is, in a broad sense, the rejection of belief in the existence of deities. In a narrower sense, atheism is specifically the position that there are no deities. Most inclusively, atheism is the absence of belief that any deities exist. Atheis... m is contrasted with theism, which, in its most general form, is the belief that at least one deity exists.The term "atheism" originated from the Greek ἄθεος, meaning "without god", used as a pejorative term applied to those thought to reject the gods worshiped by the larger society. With the spread of freethought, skeptical inquiry, and subsequent increase in criticism of religion, application of the term narrowed in scope. The first individuals to identify themselves using the word "atheist" lived in the 18th century. Some ancient and modern religions are referred to as atheistic, as they either have no concepts of deities or deny a creator deity, yet still revere other god-like entities.Arguments for atheism range from the philosophical to social and historical approaches   more
1 vote
0 comments
Atheism - Voter Comments
No Comments
Vote & Comment
10

Santaism is a religion centered on the life and teachings of Santa Clause as presented in the Holy book of Illuminati. Santaists believe that Santa Clause is the lord and savior. Santaists believe that your soul is sent to heaven or santa's workshop...  when you die. Unless you're a non-santaist, they believe your soul is sent to hell for eternal suffering   more
0 votes
0 comments
Santaism - Voter Comments
No Comments
Vote & Comment
11

Jainism, traditionally known as Jaina Shasana or Jaina dharma, is an Indian religion that prescribes a path of ahimsa—nonviolence—towards all living beings, and emphasises spiritual interdependence and equality between all forms of life. Practitione... rs believe that nonviolence and self-control are the means by which they can obtain liberation. Ascetism is thus a major focus of the Jain faith. The three main principles of Jainism are Ahimsa, Anekantvad and Aparigraha.Jainism is one of the oldest religions in the world. Jains traditionally trace their history through a succession of twenty-four propagators of their faith known as tirthankaras with Rishabh as the first and Mahāvīra as the last of the current era.Jainism is a religious minority in India, with 4.2 million adherents, and there are immigrant communities in Belgium, Canada, Hong Kong, Japan, Singapore, and the United States. The population of the Jain community across the world is around 6.1 million   more
0 votes
0 comments
Jainism - Voter Comments
No Comments
Vote & Comment
Leave a comment...
(Maximum 900 words)