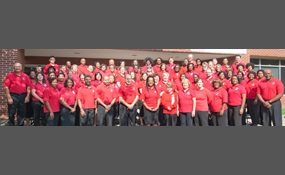 The Federal Government should not Intervene in Schools

The Common Core State Standards Initiative is an educational initiative in the United States that details what K-12 students should know in English language arts and mathematics at the end of each grade. The initiative is sponsored by the National G... overnors Association and the Council of Chief State School Officers and seeks to establish consistent educational standards across the states as well as ensure that students graduating from high school are prepared to enter credit-bearing courses at two- or four-year college programs or enter the workforce   more
3 votes
0 comments
Common Core State Standards Initiative - Voter Comments
No Comments
Vote & Comment
3

No Child Left Behind Act

The No Child Left Behind Act of 2001 is a United States Act of Congress that is a reauthorization of the Elementary and Secondary Education Act, which included Title I, the government's flagship aid program for disadvantaged students. NCLB supports ... standards-based education reform based on the premise that setting high standards and establishing measurable goals can improve individual outcomes in education.The Act requires states to develop assessments in basic skills. To receive federal school funding, states must give these assessments to all students at select grade levels. The Act does not assert a national achievement standard. Each individual state develops its own standards. NCLB expanded the federal role in public education through annual testing, annual academic progress, report cards, teacher qualifications, and funding changes.The bill passed in the U.S. Congress with bipartisan support   more
1 vote
1 comment
No Child Left Behind Act - Voter Comments

SweetTea says2014-08-05T10:29:32.2478882-05:00
Report Post
Common Core has been adopted by 45 states. What this basically means is any child living in a state that doesn't adopt CC will be screwed academically. Colleges will begin to exclude them from admission. If it would become mandatory, even state colleges would do so to continue receiving Federal funding. That may not sound fair, or ethical, but it is already happening in other ways. For example, the number of home-schooled does not compare with the number of students that colleges accept with Public or Private educations. If you have ever moved from one state to another, you can understand the necessity of Common Core more than someone who has not. This is about the BEST education possible. Unfortunately, a few politicians have tried to turn it into a state's rights issue. Again, it's the kids who get screwed. In many cases, by the politicians that their parents voted for!
Privacy Policy | Terms of Use
Sitemap | View Desktop Version
©2020 Debate.org. All rights reserved.