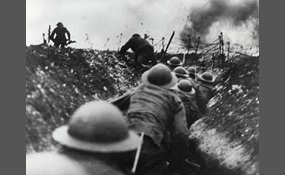 Which side was the agressor in world war one?

UtherPenguin says2015-10-04T17:54:27.1580227Z
Report Post
The Ottomans were tricked into joining the war by Enver Pasha, the Germans just wanted an excuse to do the Schliffen plan, the real aggressors of the war was Austria-Hungary,
Vote & Comment
2

France, officially the French Republic, is a unitary sovereign state comprising territory in western Europe and several overseas regions and territories. Metropolitan France extends from the Mediterranean Sea to the English Channel and the North Sea... , and from the Rhine to the Atlantic Ocean; due to its shape, it is often referred to in French as l’Hexagone. France is one of only three countries to have both Atlantic and Mediterranean coastlines. France has a population of 66 million. France is a semi-presidential republic with its capital in Paris, the nation's largest city and the main cultural and commercial center. The Constitution of France establishes the country as secular and democratic, with its sovereignty derived from the people.During the Iron Age, what is now France was inhabited by the Gauls, a Celtic people. The Gauls were conquered by the Roman Empire in 51 BC, which held Gaul until 486. The Gallo-Romans faced raids and migration from the Germanic Franks, who dominated the region for hundreds of years, eventually creating the medieval Kingdom of France   more
1 vote
0 comments
France - Voter Comments
No Comments
Vote & Comment
No comments yet.
Leave a comment...
(Maximum 900 words)
Privacy Policy | Terms of Use
Sitemap | View Desktop Version
©2021 Debate.org. All rights reserved.