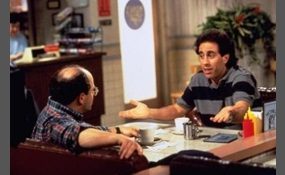 Which sitcom is better, king of queens, seinfeld, or everybody loves raymond?

Seinfeld is an American television sitcom that originally aired on NBC from July 5, 1989, to May 14, 1998. It lasted nine seasons, and is now in syndication. It was created by Larry David and Jerry Seinfeld, the latter starring as a fictionalized ve... rsion of himself. Set predominantly in an apartment block in Manhattan's Upper West Side in New York City, the show features a handful of Jerry's friends and acquaintances, particularly best friend George Costanza, former girlfriend Elaine Benes, and neighbor across the hall Cosmo Kramer.Seinfeld was produced by Castle Rock Entertainment. In syndication the series was distributed by Columbia Pictures Television and Columbia TriStar Television. Sony Pictures Television distributed the series since 2002. It was largely co-written by David and Seinfeld with script writers, who included Larry Charles, Peter Mehlman, Gregg Kavet, Andy Robin, Carol Leifer, David Mandel, Jeff Schaffer, Steve Koren, Jennifer Crittenden, Tom Gammill, Max Pross, Charlie Rubin, Marjorie Gross, Alec Berg, Elaine Pope, and Spike Feresten.A critical favorite, commercial blockbuster and cultural phenomenon, the show led the Nielsen ratings in its sixth and ninth seasons and finished among the top two every year from 1994 to 1998. In 2002, TV Guide named Seinfeld the greatest television program of all time. In 1997, the episodes "The Boyfriend" and "The Parking Garage" were respectively ranked #4 and #33 on TV Guide's 100 Greatest Episodes of All Time, and in 2009, "The Contest" was ranked #1 on the same magazine's list of TV's Top 100 Episodes of All Time. E! Named it the "number 1 reason the '90s ruled." In 2013, the Writers Guild of America named Seinfeld the #2 Best Written TV Series of All Time. That same year, Entertainment Weekly named it the 3rd best TV series of all time   more
6 votes
1 comment
Seinfeld - Voter Comments

The King of Queens

The King of Queens is an American sitcom that originally ran on CBS from September 21, 1998, to May 14, 2007. The show was produced by Hanley Productions and CBS Productions, CBS Paramount Television, in association with Columbia TriStar Television,...  and Sony Pictures Television. It was filmed at Sony Pictures Studios in Culver City, California, USA.After the series finale broadcast on May 14, 2007, The King of Queens became the last American live action sitcom that premiered in the 1990s to end its run   more
2 votes
0 comments
The King of Queens - Voter Comments
No Comments
Vote & Comment
3

Everybody Loves Raymond is an American television sitcom starring Ray Romano, Patricia Heaton, Brad Garrett, Doris Roberts, and Peter Boyle. It originally ran on CBS from September 13, 1996, to May 16, 2005. Many of the situations from the show are ... based on the real-life experiences of Romano, creator/producer Phil Rosenthal and the show's writing staff. The main characters on the show are also loosely based on Romano's and Rosenthal's real-life family members.The show reruns in syndication on various channels, such as TBS, TV Land, and in most TV markets on local stations. From 2000 to 2007, King World distributed the show for off-network syndication and Warner Bros. International Television handled international distribution. In 2007, CBS Television Distribution took over King World's distribution. CBS only owns American syndication rights; ancillary rights are controlled by HBO and Warner Bros. Television   more
1 vote
0 comments
Everybody Loves Raymond - Voter Comments
No Comments
Vote & Comment
No comments yet.
Leave a comment...
(Maximum 900 words)
Privacy Policy | Terms of Use
Sitemap | View Desktop Version
©2021 Debate.org. All rights reserved.