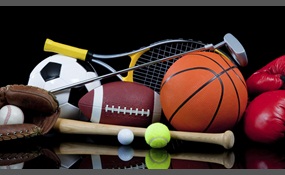 Which sport is the best

I am curious. Please vote! Please add any sports that I missed

ABCD.E says2016-03-11T15:42:56.2224543Z
Report Post
Basketball uses everything. Almost all physical areas are used and basketball can also be considered a mind game. You need to know when to drive, when to shoot, how to get around your opponent and how to prevent your opponent from getting around you.
Vote & Comment
4

Cricket is a bat-and-ball game played between two teams of 11 players each on a field at the centre of which is a rectangular 22-yard long pitch. Each team takes its turn to bat, attempting to score runs, while the other team fields. Each turn is kn... own as an innings.The bowler delivers the ball to the batsman who attempts to hit the ball with his bat away from the fielders so he can run to the other end of the pitch and score a run. Each batsman continues batting until he is out. The batting team continues batting until ten batsmen are out, or a specified number of overs of six balls have been bowled, at which point the teams switch roles and the fielding team comes in to bat.In professional cricket the length of a game ranges from 20 overs per side to Test cricket played over five days. The Laws of Cricket are maintained by the International Cricket Council and the Marylebone Cricket Club with additional Standard Playing Conditions for Test matches and One Day Internationals.Cricket was first played in southern England in the 16th century. By the end of the 18th century, it had developed to be the national sport of England   more
2 votes
0 comments
Cricket - Voter Comments
No Comments
Vote & Comment
8

The France national rugby union team represents France in rugby union. They compete annually against England, Ireland, Italy, Scotland and Wales in the Six Nations Championship. They have won the championship outright sixteen times, shared it a furt... her eight times, and have completed nine grand slams. Eight former French players have been inducted into either the International Rugby Hall of Fame or the IRB Hall of Fame—two to the International Hall only, two to the IRB Hall only, and four to both Halls of Fame.Rugby was introduced to France in 1872 by the British, and on New Year's Day 1906 the national side played its first Test match — against New Zealand in Paris. France played sporadically against the Home Nations until they joined them to form a Five Nations tournament in 1910. France also competed in the rugby competitions at early Summer Olympics, winning the gold medal in 1900 and two silver medals in the 1920s. The national team came of age during the 1950s and 1960s, winning their first Five Nations title outright in 1959. They won their first Grand Slam in 1968. Since the inaugural World Cup in 1987, France have qualified for the knock-out stage of every tournament   more
1 vote
1 comment
France national rugby union team - Voter Comments

Lacrosse is a team sport of First Nations/Native American Iroquois origin played using a small rubber ball, and a long-handled stick called a crosse or lacrosse stick. It is often played as a contact sport. The head of the lacrosse stick is strung w... ith loose mesh designed to catch and hold the lacrosse ball. Offensively, the objective of the game is to score by shooting the ball into an opponent's goal, using the lacrosse stick to catch, carry, and pass the ball to do so. Defensively, the objective is to keep the opposing team from scoring and to gain the ball through the use of stick checking and body contact or positioning. The sport has four major types: men's field lacrosse, women's lacrosse, box lacrosse and intercrosse. The sport consists of four positions: midfield, attack, defense, and goalie   more
0 votes
0 comments
Lacrosse - Voter Comments
No Comments
Vote & Comment
22

If chess is a sport, how is Chinese Checkers not a sport?
0 votes
0 comments
Chinese checkers - Voter Comments
No Comments
Vote & Comment
25

If chess is a sport, surely this has to be one.
0 votes
0 comments
Monopoly - Voter Comments
No Comments
Vote & Comment
Leave a comment...
(Maximum 900 words)