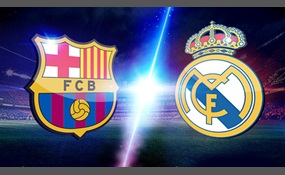 Which team is better?FC Barcelona or Real Madrid

Futbol Club Barcelona, also known as Barcelona and familiarly as Barça, is a professional football club, based in Barcelona, Catalonia, Spain.Founded in 1899 by a group of Swiss, English and Catalan footballers led by Joan Gamper, the club has becom... e a symbol of Catalan culture and Catalanism, hence the motto "Més que un club". Unlike many other football clubs, the supporters own and operate Barcelona. It is the second most valuable sports team in the world, worth $3.2 billion, and the world's second-richest football club in terms of revenue, with an annual turnover of $613 million. The official Barcelona anthem is the "Cant del Barça", written by Jaume Picas and Josep Maria Espinàs.Barcelona is the most successful club in Spain, in terms of overall official titles won. Barcelona was ranked first in the 'All-Time Club World Ranking' by IFFHS, on 31 December 2009, and was placed on top of the 2012/13 UEFA club rankings. It has won 22 La Liga, 26 Copa del Rey, 11 Supercopa de España, 3 Copa Eva Duarte and 2 Copa de la Liga trophies, as well as being the record holder for the latter four competitions   more
12 votes
2 comments
FC Barcelona - Voter Comments

Real Madrid Club de Fútbol, commonly known as Real Madrid, or simply as Real, is a professional football club based in Madrid, Spain.Founded in 1902 as Madrid Football Club, the team has traditionally worn a white home kit since. The word real is Sp... anish for royal and was bestowed to the club by King Alfonso XIII in 1920 together with the royal crown in the emblem. The team has played its home matches in the 81,044-capacity Santiago Bernabéu Stadium in downtown Madrid since 1947. Unlike most European football clubs, Real Madrid's members have owned and operated the club since its inception.The club is the world's richest football club in terms of revenue, with an annual turnover of €604 million, and the world's most valuable sports team, worth €2.5 billion. The club is one of the most widely supported teams in the world. Real Madrid is one of three founding members of the Primera División which have never been relegated from the top division, along with Athletic Bilbao and FC Barcelona. The club holds many long-standing rivalries, most notably El Clásico with FC Barcelona and the Madrid derby with Atlético Madrid   more
2 votes
1 comment
Real Madrid C.F. - Voter Comments