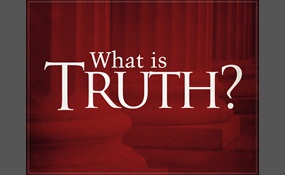 Which theory of truth do you hold to?

A theory of truth is essentially an explanation of the nature of truth and a set of laws that "true" things obey.

Constructivist epistemology is a branch in philosophy of science maintaining that natural science consists of mental constructs that are constructed with the aim of explaining sensory experience of the natural world. According to it, scientific know... ledge is constructed by the scientific community, seeking to measure and construct models of the natural world   more
1 vote
0 comments
Constructivist epistemology - Voter Comments
No Comments
Vote & Comment
2

Divine command theory is a meta-ethical theory which proposes that an action's status as morally good is equivalent to whether it is commanded by God. The theory asserts that what is moral is determined by what God commands, and that to be moral is ... to follow his commands. Followers of both monotheistic and polytheistic religions in ancient and modern times have often accepted the importance of God's commands in establishing morality. Numerous variants of the theory have been presented: historically, figures including Saint Augustine, Duns Scotus, and Thomas Aquinas have presented various versions of divine command theory; more recently, Robert Merrihew Adams has proposed a "modified divine command theory" based on the omnibenevolence of God in which morality is linked to human conceptions of right and wrong. Paul Copan has argued in favour of the theory from a Christian viewpoint, and Linda Zagzebski's divine motivation theory proposes that God's motivations, rather than commands, are the source of morality   more
1 vote
0 comments
Divine command theory - Voter Comments
No Comments
Vote & Comment
3

Veritism was a socio-philosophical ideology promoted by the "Veritism Foundation". It advocates that man has been presented with no conclusive evidence lending credence to the existence of a specific deity, or supreme entity and thus has no justific... ation for reaching any kind of conclusions on the nature of such a being other than that it is a benign force   more
0 votes
0 comments
Veritism - Voter Comments
No Comments
Vote & Comment
6

Trivialism is the logical theory that all statements are true and that all contradictions of the form "p and not p" are true. In accordance to this, a trivialist is a person who believes everything is true.In classical logic, trivialism is in direct...  violation of Aristotle's law of noncontradiction. In philosophy, trivialism may be considered by some to be the complete opposite of skepticism. Paraconsistent logics may use "the law of non-triviality" to abstain from trivialism in logical practices that involve true contradictions.The vast majority of philosophers deny trivialism and can be considered non-trivialists or anti-trivialists. Public advocates of the theory are nearly non-existent due to it being considered an absurdity. It is generally agreed that trivialism as a committed philosophy cannot be genuinely applied in life.Theoretical arguments and anecdotes have been made for trivialism for research purposes to contrast with theories such as modal realism, dialetheism and paraconsistent logics.Religions and theories such as Jainism may be claimed to be advocates of trivialism   more
0 votes
0 comments
Trivialism - Voter Comments
No Comments
Vote & Comment
7

Tarski's undefinability theorem, stated and proved by Alfred Tarski in 1936, is an important limitative result in mathematical logic, the foundations of mathematics, and in formal semantics. Informally, the theorem states that arithmetical truth can... not be defined in arithmetic.The theorem applies more generally to any sufficiently strong formal system, showing that truth in the standard model of the system cannot be defined within the system   more
0 votes
0 comments
Tarski's undefinability theorem - Voter Comments
No Comments
Vote & Comment
8

Coherence theory of truth regards truth as coherence within some specified set of sentences, propositions or beliefs. There is no single set of such "logical universes", but rather an assortment of perspectives that are commonly discussed under this...  title. The model is contrasted with the correspondence theory of truth.A positive tenet is the idea that truth is a property of whole systems of propositions and can be ascribed to individual propositions only derivatively according to their coherence with the whole. While modern coherence theorists hold that there are many possible systems to which the determination of truth may be based upon coherence, others, particularly those with strong religious beliefs hold that the such truth only applies to a single absolute system. In general, then, truth requires a proper fit of elements within the whole system. Very often, though, coherence is taken to imply something more than simple formal coherence. For example, the coherence of the underlying set of concepts is considered to be critical factor in judging its coherence and validity   more
0 votes
0 comments
Coherence theory of truth - Voter Comments
No Comments
Vote & Comment
9

Satya is a central concept in Indian religions. It is a Sanskrit word that loosely translates into English as "unchangeable", "that which pervades the universe in all its constancy". It is also interpreted as "absolute truth" or "reality".
0 votes
0 comments
Satya - Voter Comments
No Comments
Vote & Comment
13

The correspondence theory of truth states that the truth or falsity of a statement is determined only by how it relates to the world and whether it accurately describes that world. The theory is opposed to the coherence theory of truth, which holds ... that the truth or falsity of a statement is determined by its relations to other statements rather than its relation to the world.Correspondence theories claim that true beliefs and true statements correspond to the actual state of affairs. This type of theory attempts to posit a relationship between thoughts or statements on one hand, and things or facts on the other. It is a traditional model which goes back at least to some of the classical Greek philosophers such as Socrates, Plato, and Aristotle. This class of theories holds that the truth or the falsity of a representation is determined solely by how it relates to a reality; that is, by whether it accurately describes that reality. As Aristotle claims in his Metaphysics: "To say that [either] that which is, is not or that which is not is, is a falsehood; and to say that that which is, is and that which is not is not, is true"   more
0 votes
0 comments
Correspondence theory of truth - Voter Comments
No Comments
Vote & Comment
15

Dialetheism is the view that some statements can be both true and false simultaneously. More precisely, it is the belief that there can be a true statement whose negation is also true. Such statements are called "true contradictions", or dialetheia.... Dialetheism is not a system of formal logic; instead, it is a thesis about truth, that influences the construction of a formal logic, often based on pre-existing systems. Introducing dialetheism has various consequences, depending on the theory into which it is introduced. For example, in traditional systems of logic, every statement becomes true if a contradiction is true; this means that such systems become trivialist when dialetheism is included as an axiom. Other logical systems do not explode in this manner when contradictions are introduced; such contradiction-tolerant systems are known as paraconsistent logics.Graham Priest defines dialetheism as the view that there are true contradictions. JC Beall is another advocate; his position differs from Priest's in advocating constructive deflationism regarding the truth predicate   more
0 votes
0 comments
Dialetheism - Voter Comments
No Comments
Vote & Comment
Leave a comment...
(Maximum 900 words)