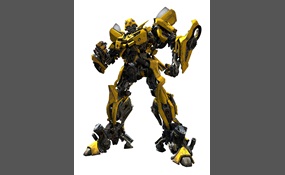 Which Transfomers movie was the WORST?

Transformers: Revenge of the Fallen

Transformers: Revenge of the Fallen is a 2009 American science fiction action film directed by Michael Bay and executive produced by Steven Spielberg. It is a sequel to 2007's Transformers and the second installment in the live-action Transformers s... eries. The plot revolves around Sam Witwicky, who is caught in the war between two factions of alien robots, the Autobots and the Decepticons. Sam is having hallucinatory episodes of Cybertronian symbols, and is being hunted by the Decepticons under the orders of an ancient Decepticon named The Fallen, who seeks to get revenge on Earth by finding and activating a machine that would provide the Decepticons with an energon source, destroying the Sun and all life on Earth in the process.With deadlines jeopardized by possible strikes by the Directors Guild of America and the Screen Actors Guild, Bay managed to finish the production on time with the help of previsualization and a scriptment by his writers Roberto Orci, Alex Kurtzman, and series newcomer Ehren Kruger. Shooting took place from May to November 2008, with locations in Egypt, Jordan, Pennsylvania, New Jersey, and California, as well as air bases in New Mexico and Arizona   more
8 votes
2 comments
Transformers: Revenge of the Fallen - Voter Comments

Dishoungh says2014-03-27T22:03:26.3854794-05:00
Report Post
How can there be so many plot holes and contradictions in so many parts of this movie? This movie was hands down the worst Transformers movie ever. This wasn't even a Transformers movie. They might as well call it Sam Witwicky because it was more about him than anyone else.

Transformers: Dark of the Moon

Transformers is a 2007 American science fiction action film based on the Transformers toy line. The film, which combines computer animation with live-action, is directed by Michael Bay, with Steven Spielberg serving as executive producer. It is the ... first installment of the live-action Transformers film series. It stars Shia LaBeouf as Sam Witwicky, a teenager who gets caught up in a war between the heroic Autobots and the evil Decepticons, two factions of alien robots who can disguise themselves by transforming into everyday machinery. The Autobots intend to use the AllSpark, the object that created their robotic race, in an attempt to rebuild Cybertron and end the war while the Decepticons desire control of the AllSpark with the intention of using it to build an army by giving life to the machines of Earth. Tyrese Gibson, Josh Duhamel, Anthony Anderson, Megan Fox, Rachael Taylor, John Turturro and Jon Voight also star, while voice actors Peter Cullen and Hugo Weaving voice Optimus Prime and Megatron respectively.The film was produced by Don Murphy and Tom DeSanto. They developed the project in 2003, and DeSanto wrote a treatment. Steven Spielberg came on board the following year, hiring Roberto Orci and Alex Kurtzman to write the screenplay. The U.S. military and General Motors loaned vehicles and aircraft during filming, which saved money for the production and added realism to the battle scenes   more
1 vote
1 comment
Transformers - Voter Comments