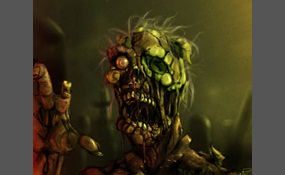 Which Zombie is the worst?

WZ's are zombie life forms deliberately created via bio/bio-mechanical engineering for the purpose of being employed as weapons. Zombie weaponization programs and supporting infrastructures are included in COAs to deal with these threats.
4 votes
0 comments
Weaponized Zombies (WZ) - Voter Comments
No Comments
Vote & Comment
2

CZ's occur when old hens that can no longer lay eggs are incorrectly euthanized by poultry farmers using carbon monoxide. The hens are then deposited in large piles to decompose. The hens appear to be dead when buried, but inexplicably come back to ... life and dig themselves out from the piles of dead chickens. After reaching the surface, CZ's stagger about for a period of time before ultimately expiring due to internal organ failure   more
3 votes
1 comment
Chicken Zombies (CZ) - Voter Comments

VZ's are zombie life forms originating from any cause but pose no direct threat to humans because they only eat plant life (as indicated in the popular game "Plants Vs. Zombies"). Although VZ's do not attack humans or other animal life, they will co... nsume all plant life in front of them. They can cause massive de-forestation or elimination of basic food crops essential to humans (rice, corn, soybeans)   more
2 votes
1 comment
Vegetarian Zombies (VZ) - Voter Comments

SIZ's are zombie life forms originating from the introduction of a symbiant life form into an otherwise healthy host. Although the symptoms of symbiant zombieism is similar in most regards to pathogenic zombeism, the symbiant does not kill the host ... organism quickly, or at all. However, there is no known way to save an organism after zombiesm has occurred-even if the symbiant is remove   more
0 votes
0 comments
Symbiant-Induced Zombies (SIZ) - Voter Comments
No Comments
Vote & Comment
Leave a comment...
(Maximum 900 words)