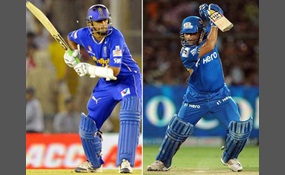 Who contributed more to Cricket --- Sachin or Dravid?

As the title says, we just want to know the public's thought over the matter..

Sachin Ramesh Tendulkar is a former Indian cricketer widely acknowledged as one of the greatest batsmen of all time, popularly holding the title "God of Cricket" among his fans. Some commentators, such as former West Indian batsman Brian Lara, have ... labelled Tendulkar the greatest cricketer of all time. He took up cricket at the age of eleven, made his Test debut against Pakistan at the age of sixteen, and went on to represent Mumbai domestically and India internationally for close to twenty-four years. He is the only player to have scored one hundred international centuries, the first batsman to score a double century in a One Day International, the only player to complete more than 30,000 runs in international cricket. And the 16th player and first Indian to aggregate 50,000 runs or more in all forms of domestic and international recognised cricket.In 2002 just half way through his career, Wisden Cricketers' Almanack ranked him the second greatest Test batsman of all time, behind Don Bradman, and the second greatest ODI batsman of all time, behind Viv Richards   more
2 votes
1 comment
Sachin Tendulkar - Voter Comments

Rahul Dravid is a former Indian cricketer and captain, widely regarded as one of the greatest batsmen in the history of cricket. Born in a Marathi family, he started playing cricket at the age of 12 and later represented the state team at the under-... 15, under-17 and under-19 levels. Hailed as The Wall, Dravid was named one of the best five cricketers of the year by Wisden Cricketers' Almanack in 2000 and received the Player of the Year and the Test Player of the Year awards at the inaugural ICC awards ceremony in 2004. In December 2011, he became the first non-Australian cricketer to deliver the Bradman Oration in Canberra.As of October 2012, Dravid is the fourth-highest run scorer in Test cricket, after Sachin Tendulkar, Ricky Ponting and Jacques Kallis, and is only the second Indian cricketer, after Tendulkar to score 10,000 runs both in Tests and in ODIs. In 2004, after completing his century against Bangladesh in Chittagong, he became the first and the only player till date to score a century in all the ten Test-playing countries. As of October 2012, he holds the record for the most number of catches taken by a player in Test cricket, with 210   more
2 votes
1 comment
Rahul Dravid - Voter Comments