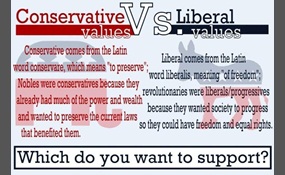 Who do you find to be more "reasonable": liberals or conservatives?

Reasonable as in less stubborn in their beliefs and more willing to listen and possibly accept other beliefs. Or would it be ideologies? I'm not putting plain libertarianism because they borrow from both sides and thus are technically classified as "more reasonable".

Libertarian conservatism is a conservative political philosophy and ideology that combines right-libertarian politics and conservative values. Libertarian conservatives' first value is negative liberty to achieve socially and culturally conservative...  ends. They reject liberal social engineering. Frank Meyer, a co-founder of National Review has called this combination fusionism. In political science, the term is used to refer to ideologies that combine the advocacy of economic principles, such as fiscal discipline, respect for contracts, defense of private property and free markets and the classical conservative stress on self-help and freedom of choice under a laissez-faire capitalist society with social tenets such as the belief in natural inequality, the importance of religion, and the value of traditional morality through a framework of limited, constitutional, representative government.Freedom & Virtue: The Conservative Libertarian Debate, edited by George W. Carey, contains essays which describe "the tension between liberty and morality" as "the main fault line dividing the two philosophies.   more
14 votes
2 comments
Libertarian Conservatives - Voter Comments

sambob says2014-08-07T17:32:50.0715797-05:00
Report Post
I picked this because the only liberals I see are the femenistas, and fat is beautiful activists. I have interviewed them and all I see is they do not act out of reason, they present statistics without understanding them. I would say I am a liberal, but am ashamed to be so. I follow the scientific method, while the liberals I see just say, fat is beautiful, when the majority clearly prefers those in shape to those in risk of diabeties. The fat, in fat is beautiful, is not even fat, it is normal weight. The reason is because if you brought up the fat models and Scarlet Johansen and asked people who they prefer, Scarlet would win by a landslide.

Liberalism is a political philosophy or worldview founded on ideas of liberty and equality. Liberals espouse a wide array of views depending on their understanding of these principles, but generally they support ideas such as free and fair elections... , civil rights, freedom of the press, freedom of religion, free trade, and private property.Liberalism first became a distinct political movement during the Age of Enlightenment, when it became popular among philosophers and economists in the Western world. Liberalism rejected the notions, common at the time, of hereditary privilege, state religion, absolute monarchy, and the Divine Right of Kings. The 17th century philosopher John Locke is often credited with founding liberalism as a distinct philosophical tradition. Locke argued that each man has a natural right to life, liberty and property and according to the social contract, governments must not violate these rights. Liberals opposed traditional conservatism and sought to replace absolutism in government with representative democracy and the rule of law   more
7 votes
1 comment
Liberals - Voter Comments

Conservatism as a political and social philosophy promotes retaining traditional social institutions. A person who follows the philosophies of conservatism is referred to as a traditionalist or conservative. Some conservatives seek to preserve thing... s as they are, emphasizing stability and continuity, while others, called reactionaries, oppose modernism and seek a return to "the way things were". The first established use of the term in a political context originated with François-René de Chateaubriand in 1818, during the period of Bourbon restoration that sought to roll back the policies of the French Revolution. The term, historically associated with right-wing politics, has since been used to describe a wide range of views. There is no single set of policies that are universally regarded as conservative, because the meaning of conservatism depends on what is considered traditional in a given place and time. Thus conservatives from different parts of the world—each upholding their respective traditions—may disagree on a wide range of issues   more
3 votes
0 comments
Conservatives - Voter Comments
No Comments
Vote & Comment
4

Neither side will ever give in to the other. Instead they will be arguing over the internet for eternity, throwing up information from Wikipedia at their opponent(s) until they feel satisfied with themselves. Yet, this is why people have opinions ... and they stick with it. It's what they believe in and no one else should try to manipulate them. It's their belief, let them have it and engage in debates for good fun   more
2 votes
2 comments
Neither/None - Voter Comments

svyaz says2014-08-12T19:21:51.7512029-05:00
Report Post
Moderates are probably the most reasonable. Communication is a great way for the country to progress, because pointing fingers stalls the government. Bipartisanship, it won't fix everything but it'll go a long way.
Vote & Comment
5

Anarchism is a political philosophy that advocates stateless societies often defined as self-governed voluntary institutions, but that several authors have defined as more specific institutions based on non-hierarchical free associations. Anarchism ... holds the state to be undesirable, unnecessary, or harmful. While anti-statism is central, some argue that anarchism entails opposing authority or hierarchical organisation in the conduct of human relations, including, but not limited to, the state system. As a subtle and anti-dogmatic philosophy, anarchism draws on many currents of thought and strategy. Anarchism does not offer a fixed body of doctrine from a single particular world view, instead fluxing and flowing as a philosophy. There are many types and traditions of anarchism, not all of which are mutually exclusive. Anarchist schools of thought can differ fundamentally, supporting anything from extreme individualism to complete collectivism. Strains of anarchism have often been divided into the categories of social and individualist anarchism or similar dual classifications   more
0 votes
0 comments
Libertarian Liberals - Voter Comments
No Comments
Vote & Comment
6

Communism is a socioeconomic system structured upon common ownership of the means of production and characterized by the absence of social classes, money, and the state; as well as a social, political and economic ideology and movement that aims to ... establish this social order. The movement to develop communism, in its Marxist–Leninist interpretations, significantly influenced the history of the 20th century, which saw intense rivalry between the states which followed this ideology and those who didn't.Communism was first developed into a scientific theory by German philosopher and social scientist Karl Marx, and the collective understanding of this scientific approach is today commonly referred to as Marxism. According to Marxism, capitalism is a historically necessary stage of society, which has led to the concentration of social classes into two major groups: proletariat - who must work to survive, and make up a majority of society - and bourgeoisie - a minority who derive profit from private ownership of the means of production   more
0 votes
0 comments
Authoritarian Liberals - Voter Comments
No Comments
Vote & Comment
7

Fascism is a form of radical authoritarian nationalism that came to prominence in early 20th-century Europe. Influenced by national syndicalism, fascism originated in Italy in the immediate aftermath of World War I, combining more typically right-wi... ng positions with elements of left-wing politics, in opposition to liberalism, Marxism, and traditional conservatism. Although fascism is usually placed on the far right on the traditional left–right spectrum, several self-described fascists have said that the description is inadequate.Fascists sought to unify their nation through an authoritarian state that promoted the mass mobilization of the national community and were characterized by having leadership that initiated a revolutionary political movement aiming to reorganize the nation along principles according to fascist ideology. Fascist movements shared certain common features, including the veneration of the state, a devotion to a strong leader, and an emphasis on ultranationalism and militarism   more
0 votes
0 comments
Authoritarian Conservatives - Voter Comments
No Comments
Vote & Comment
Leave a comment...
(Maximum 900 words)

PetersSmith says2014-08-07T17:34:43.2663073-05:00
Report Post
Remember, reasonable as in less stubborn in their beliefs, more willing to listen and possibly accept other beliefs, and they don't shove their beliefs down other people's throats. You know, that kind of thing.

PetersSmith says2014-08-07T19:41:54.8121095-05:00
Report Post
Max.Wallace: I'm not interested in debating with you. I just think it's contradictory to associate your choice with "this is a stupid question" because that automatically means you're conceited and stubborn.

Max.Wallace says2014-08-07T19:46:30.9614931-05:00
Report Post
I am a little sorry for the comment, because it was the perfect poll to prove my point, but once the truth is revealed, the world of animals will unite against it, congratulations, good question, it just made me a little afraid, squeamish, must have been that root canal I had. Sorry, Agent Smith.

yetifivepecks says2014-08-07T22:15:16.2232256-05:00
Report Post
It depends heavily on the individual. I have met people from all parts of the spectrum. I am around conservatives all the time. I definitely prefer to talk politics with Libertarians or Liberals, but I am not sure who is most reasonable in general.
Privacy Policy | Terms of Use
Sitemap | View Desktop Version
©2020 Debate.org. All rights reserved.